A Majority of U.S. Mobile Users Are Now Smartphone Users

Five Other Countries Crossed the 50% Threshold in 2012, Five More Projected to Follow This Year
READ THIS NEXT
Pinterest launches next phase of augmented reality beauty regimen

Smartphone users are now the majority among people with mobile phones.

Norway, Sweden, the U.K., South Korea and Australia also passed the 50% threshold in 2012, and six more countries (Canada, Denmark, the Netherlands and Finland) are projected to reach that milestone sometime in 2013.

Worldwide smartphone adoption continues to lag behind, as less than a third of global mobile phone users will have smartphones in 2013, according to eMarketer. That figure will approach the 50% point in 2017, when the research firm projects global smartphone penetration will reach 49.3%. 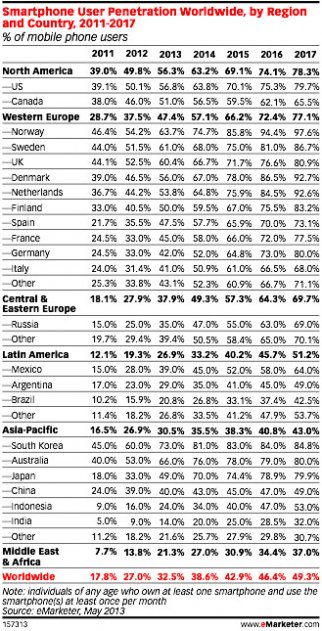