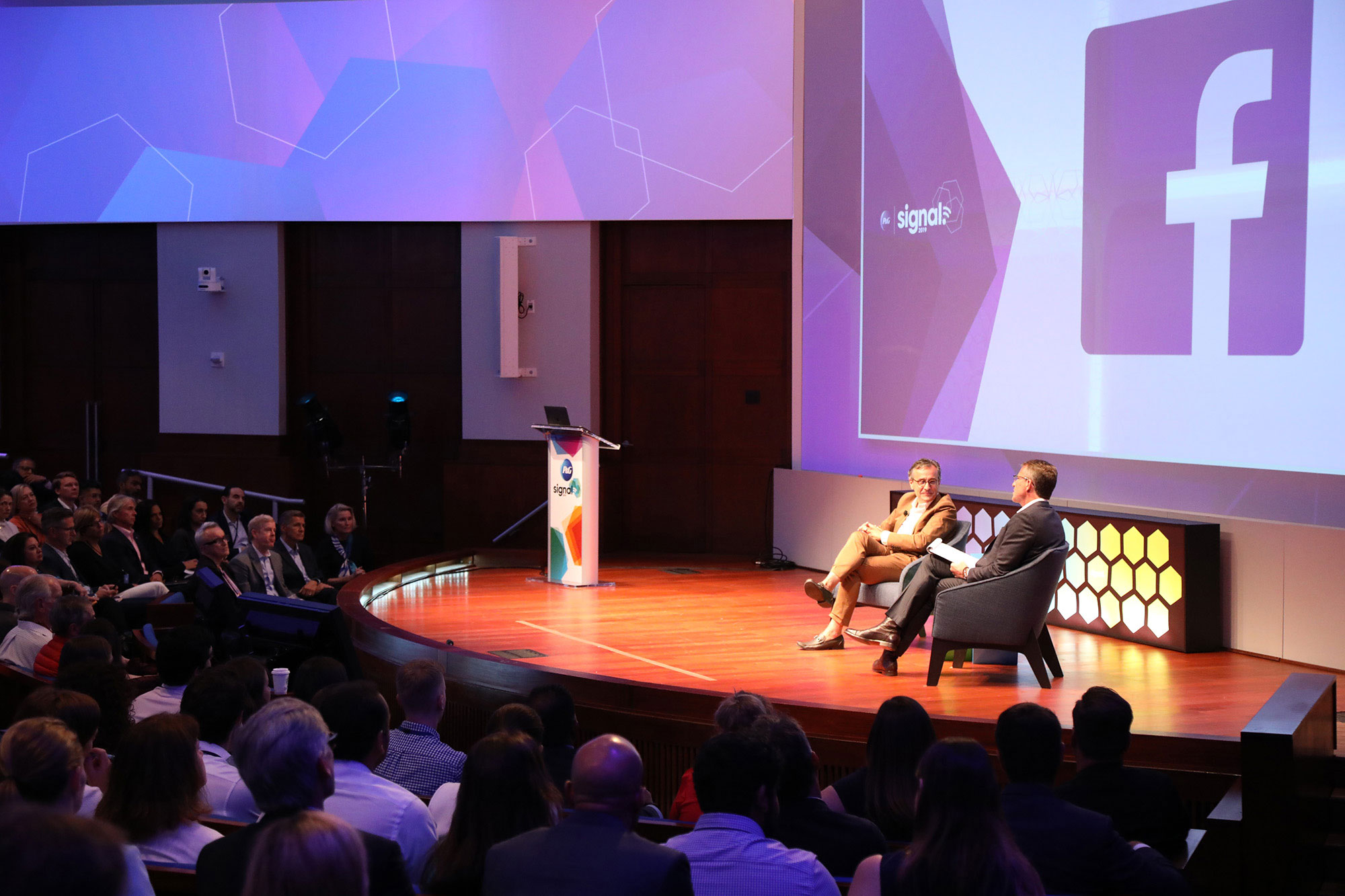 Facebook may need government help to fix problems that led to its brand crisis. But Chief Marketing Officer Antonio Lucio says that breaking the behemoth up is a bad idea because Facebook's size makes it a counterweight to governments that want to repress free speech.

Lucio also sees Facebook’s recent proposal to create a global cryptocurrency—seen by critics as a ripe-for-abuse bid for global dominance—as an example of how the company is reforming by floating an idea publicly first rather than just putting it into the market.

Lucio made the remarks at Procter & Gamble Co.’s Signal conference in Cincinnati on Wednesday, questioned by Recount Media Founder and CEO John Battelle.

The former HP chief marketer acknowledged he didn’t initially want the Facebook job when Chief Operating Officer Sheryl Sandberg approached him last year, in part because he didn’t understand what a Facebook CMO would do. He’s learning it begins with learning the workings of the platforms and winning credibility among senior leaders.

Of course, he also inherited a brand crisis of unprecedented proportions created by those leaders. Facebook’s ratings for “trust and respect” plunged 43 percentage points in the past year, the biggest fall for a brand in 20 years of data from the Harris Poll.

“If you see Antonio, give him a hug,” said Endeavor Chief Marketing Officer and former Uber Chief Brand Officer Bozoma Saint John in a later presentation at Signal. “I would have appreciated a hug when I was at Uber,” which during her year there was “taking the brunt of all of the ills of Silicon Valley.”

“We’ve allowed the world to interpret everything we’ve done, even the inventions of some of our leaders, and we need to be proactive in telling our own story,” Lucio said. His remit, beyond getting more people to use more Facebook products for more time, is to help deliver a cohesive corporate narrative about “responsibility, social impact and innovation.

“You cannot deal with social impact,” he said, “until you deal with the social responsibility part.”

To that end, Lucio walked a squiggly line between why Facebook needs government and why government should leave it alone.

The platform needs government definitions and regulations to help tackle brand safety, fake news, election interference, data management and privacy issues it faces. But he said Facebook shouldn’t be broken up, in part because its scale gives it more power to fix these problems and resist governments that want to censor free speech online. Besides, he said even with Instagram, Messenger and WhatsApp, Facebook still only accounts for about 6 percent of U.S. ad revenue.

Facebook rejected the idea of creating a new holding-company name to encompass all its platforms and perhaps insulate less-stressed parts of the company from scandals facing the flagship brand, Lucio said. “We have to own it. That was a strategic decision.”

But he said, “Facebook, the corporate entity, needs to be bolder in terms of defending the mission—that giving people a voice, connecting people around the world, is actually good for the world.”

Battelle pointedly asked why, amid all the scandals, Facebook chose now to propose its global cryptocurrency, Libra. Lucio responded that he actually sees Libra as a sign of reform. “In the past, we would have just put it out there. It’s done,” he said, following the company's old the "move fast and break things" approach.

“This is a fundamentally different approach,” Lucio said. “The only thing the company has done is to write a white paper and put ourselves in front of regulators in Europe as well as the United States. This thing is going to take time, so we might as well have these conversations now. The company has made clear we are not going to go forward without agreement.”