On July 20, 1969, Neil Armstrong and Buzz Aldrin became the first people to set foot on the Moon—now, 50 years later, companies from around the world are taking note of the Moon’s perennial power as a marketing tool, from releasing limited-edition lunar products to reviving creative campaigns reminiscent of the Space Age.

As the world celebrates Apollo 11’s historic voyage, here are 11 of the brands doing their best to capitalize on the 50th anniversary of man’s first trip to the Moon:

Hotels.com
Hotels.com launched a very symbolic, out-of-this-world flash sale. Initiated at 9:32 a.m. EST on July 16—50 years to the minute since man’s inaugural trip to the Moon blasted off from Cape Canaveral—the booking site opened an 11-minute window where 11 hotels in seven different countries, all with “moon” in their names, could be booked for 50 percent off. 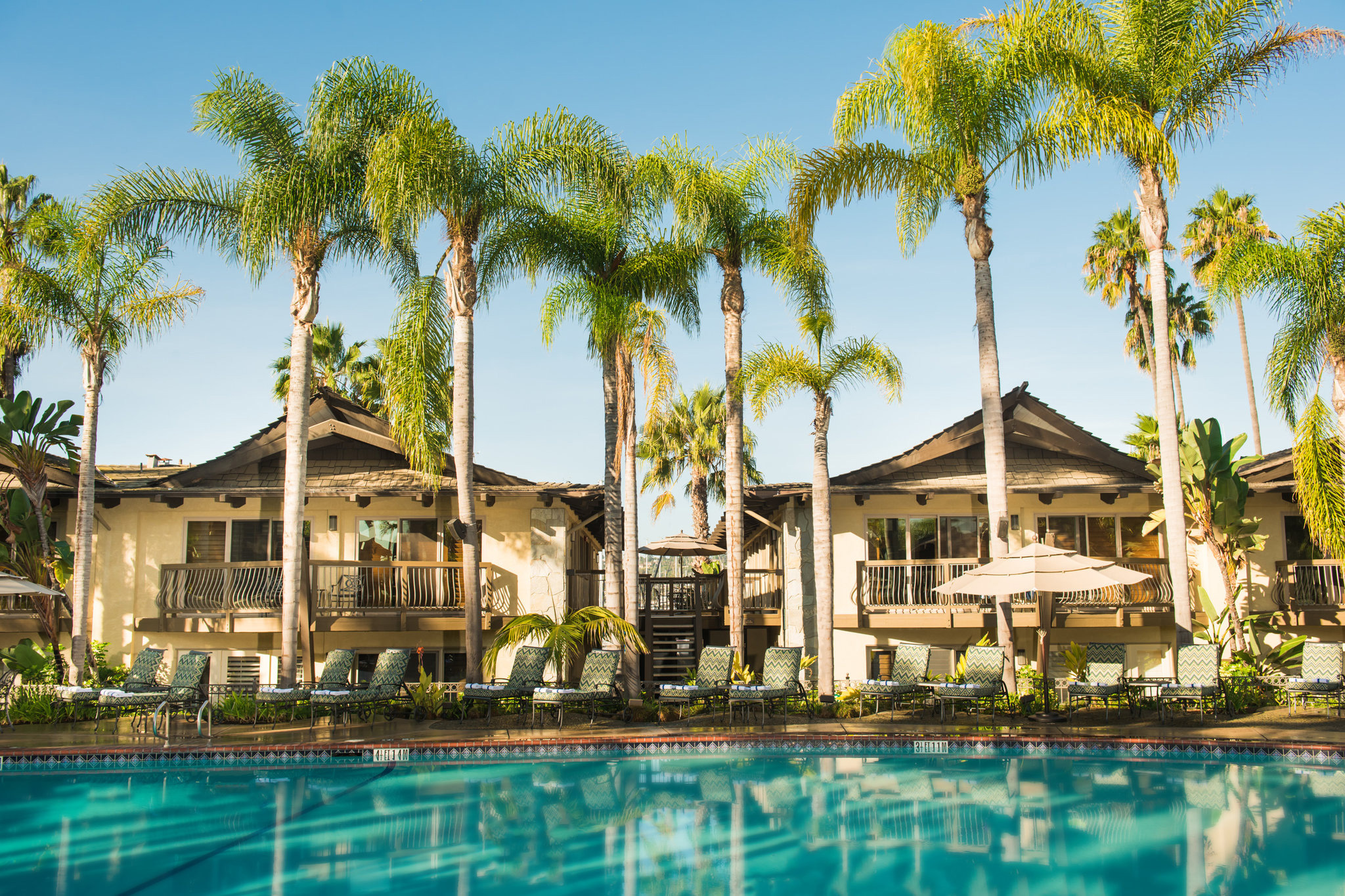 Humphrey's Half Moon Inn in San Diego, one of the 11 participating hotels.

Blue Moon
After Jeff Bezos’ announcement in May that his space exploration firm Blue Origin’s first lunar lander would be named “Blue Moon,” Blue Moon Brewing Company saw its opening and stepped in to create a special keg modeled after the spacecraft. While the space-bound Blue Moon lander won’t be ready until 2024, Earth-bound Blue Moon’s new keg will be available for sale from July 20 to coincide with the Apollo 11 landing’s anniversary. 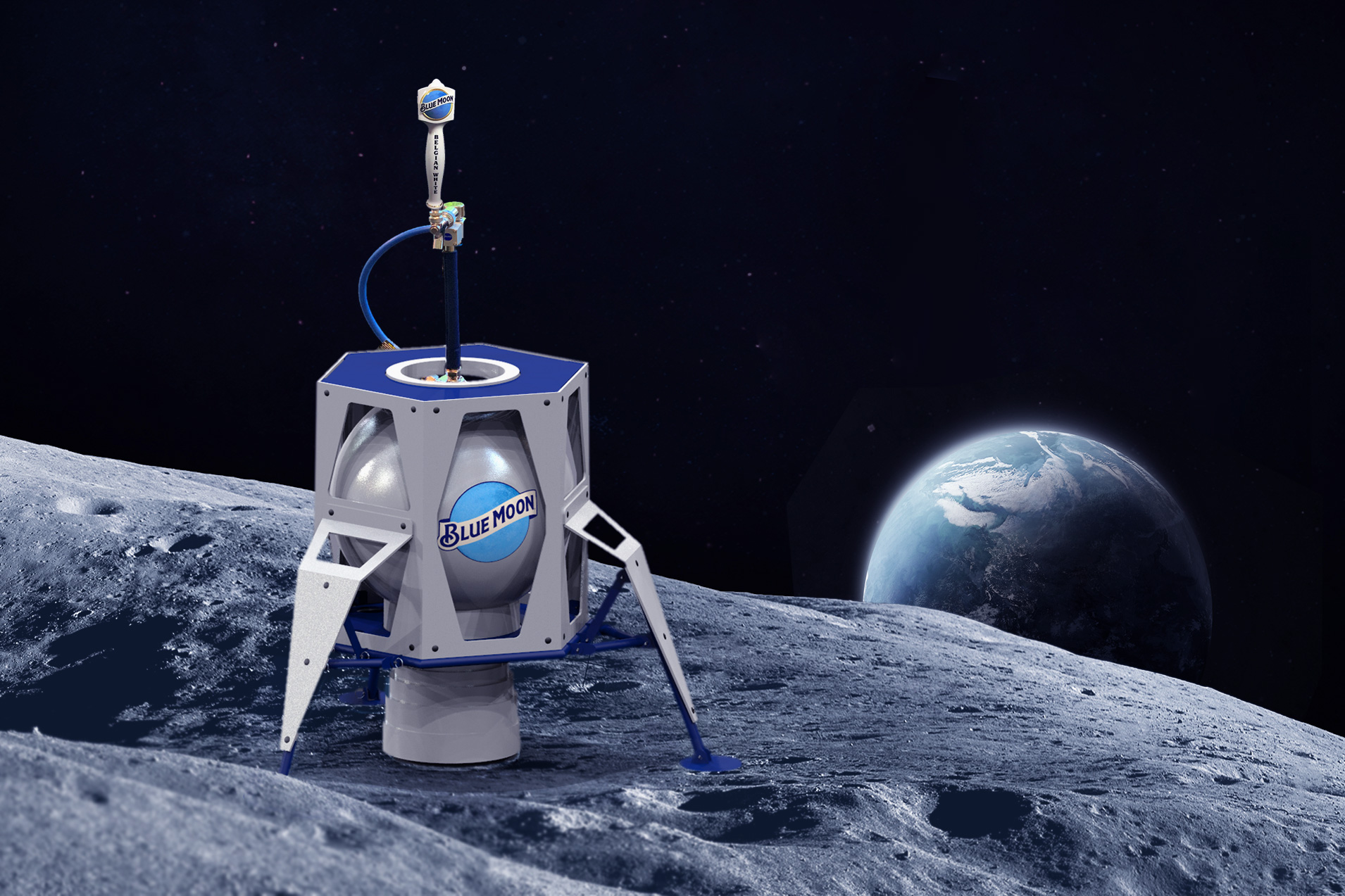 Channel 4
British television network Channel 4 partnered with Little Dot Studios to create a six-day livestream that mirrors the timeline and progress of the original 1969 voyage. Designed to complement two Moon landing documentaries airing on Channel 4 this week, the round-the-clock YouTube feed has been reconstructed using a mix of archival footage and digitally rendered clips, all narrated by the unedited audio of the astronauts’ communications with NASA’s Mission Control. To watch live, click here. 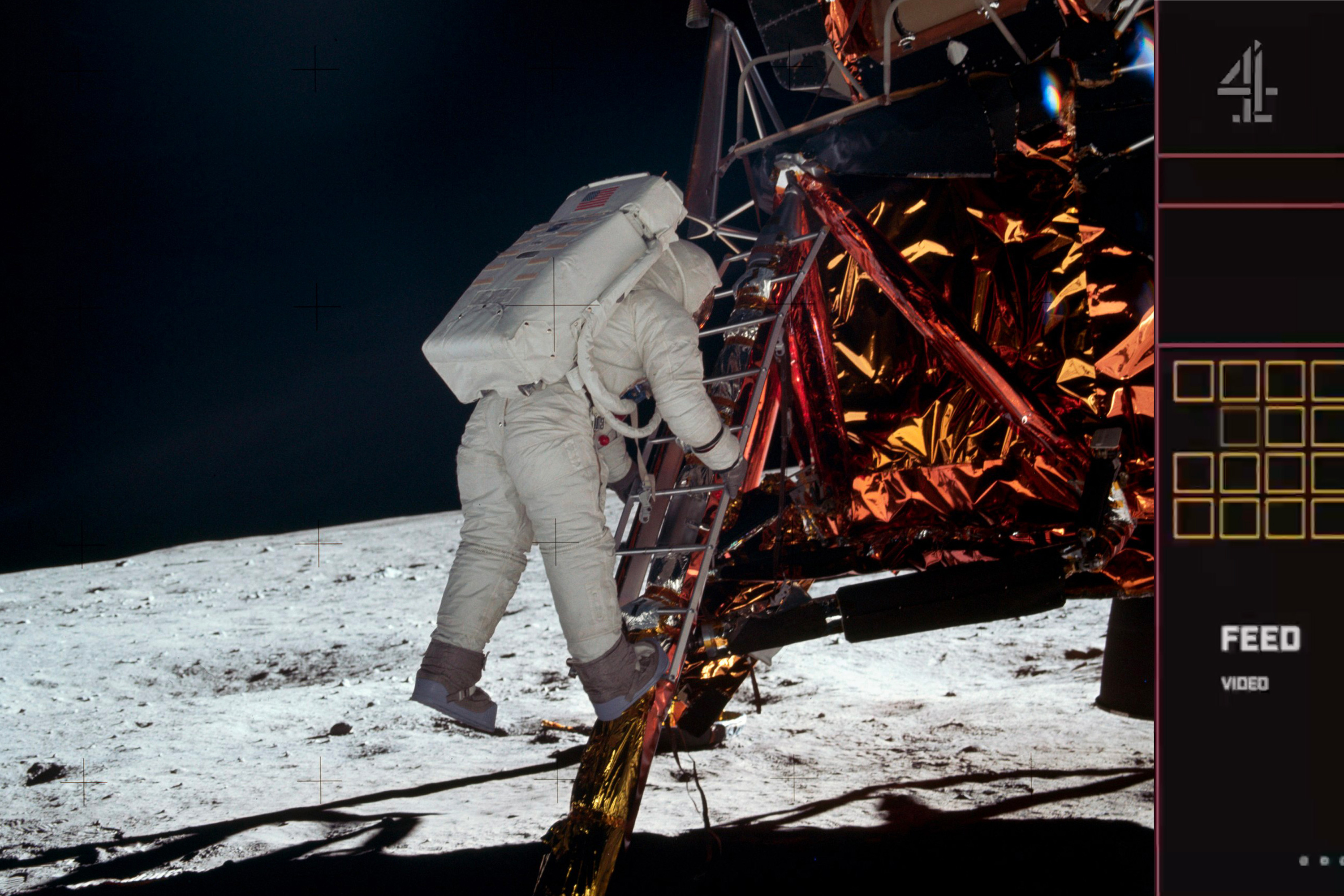 Oreo
Last month, Oreo launched its newest flavor: Marshmallow Moon, a special edition cookie that features three unique designs of an astronaut, a spaceship and a crescent moon. Filled with purple marshmallow creme, the new space-themed cookies will be sold in glow-in-the-dark packages that come with three collectible sticker packs. 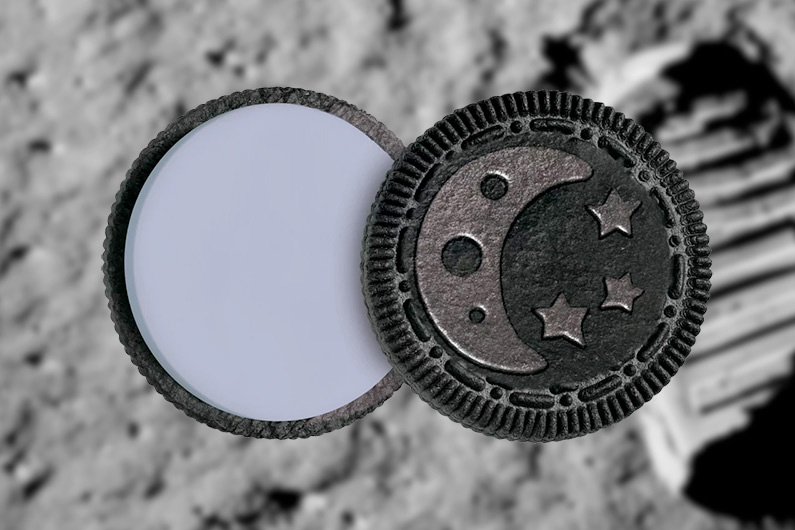 Nissan
Nissan is releasing a new European ad campaign to promote the Qashqai, its crossover SUV. Set to “The Blue Danube” as an homage to Stanley Kubrick’s “2001: A Space Odyssey,” the 60-second video shows a skateboarding astronaut gliding over a dusty moonscape, relating the car and its semi-autonomous ProPilot driving mode to the 1969 Moon landing, with the tagline: “Technology is beautiful when it moves us.”

Krispy Kreme
After archival footage from 1969 emerged of Krispy Kreme serving onlookers at a Cape Canaveral viewing area prior to Apollo 11’s launch, the company last month released two new crème-filled donuts in vanilla and chocolate to honor its 50-year history as a galactic treat vendor. Unveiled with a 60-second ad stylized as a back-and-forth between a donut-loving astronaut and Mission Control in Houston, the “Original Filled” donuts have since found themselves a home on Krispy Kreme’s permanent menu.

Budweiser
Budweiser designed a special beer, Discovery Reserve American Red Lager, based on shelved recipes that date from the time of the Apollo missions in the 1960s and 1970s. Launched with a 30-second ad showing the beer served by the light of the Moon, Bud’s Discovery Reserve isn’t the brewer’s first foray into orbit—it follows the 2017 “Bud on Mars” initiative, based in part around studying barley growth and carbonation in space.

Lego
Lego teamed up with NASA to design a detailed 1,087-piece “Creator” Lego set replicating the Eagle lander that brought Neil Armstrong and Buzz Aldrin to the surface of the Moon. Released on store shelves last month, the new set isn’t the Danish toy maker’s first lunar lander—Lego released one in 2003 in cooperation with the Discovery—though the 50th anniversary version is both larger and more intricate. 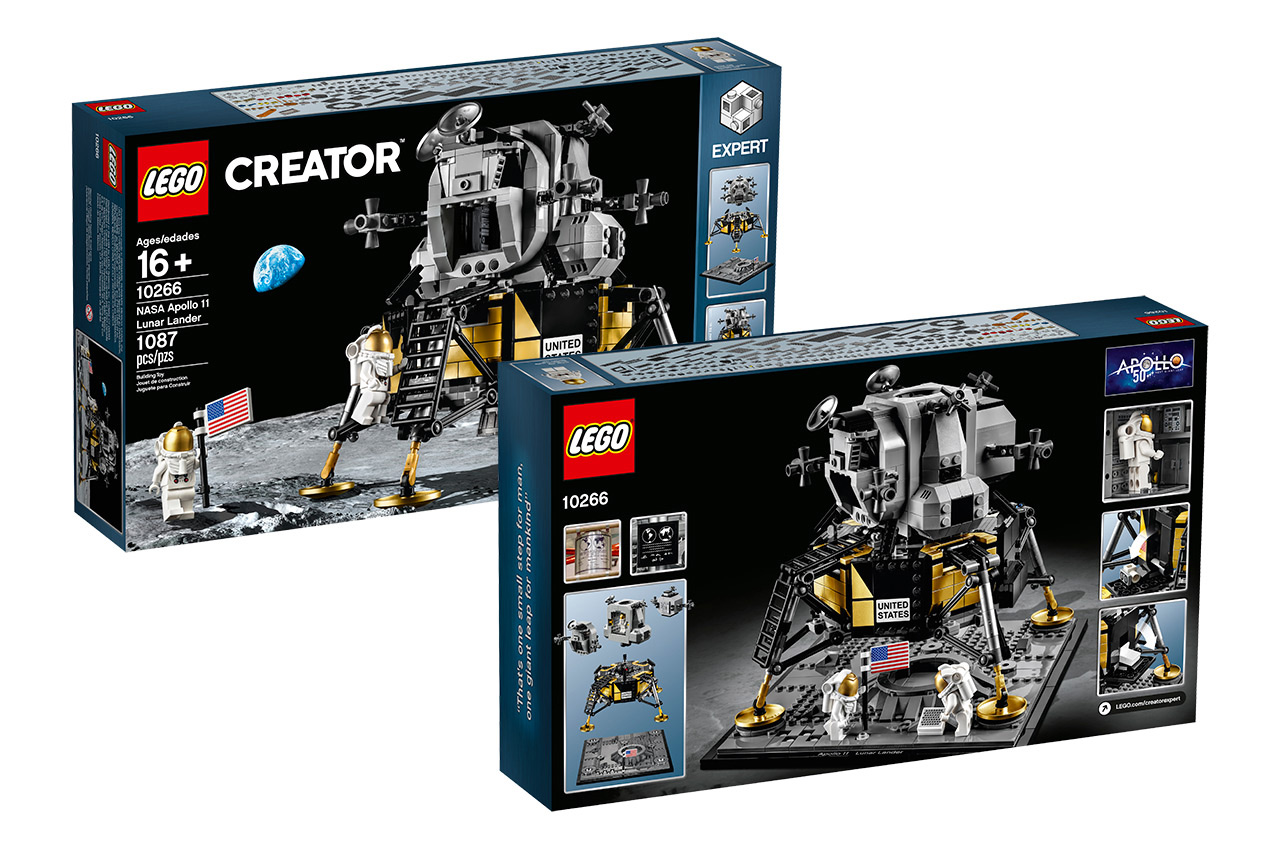 Dairy Queen
For the month of July, Dairy Queen is nodding to the 1969 Apollo 11 voyage with a unique frozen treat: the Zero Gravity Blizzard. Made with Oreo cookie pieces, cotton-candy topping, “sparkly swirls” and colorful star-shaped sprinkles, the gravity-defying Blizzard is guaranteed to be served upside down or the next one’s free, and its release earlier this month was accompanied by an out-of-this-world Spotify playlist of 29 space-themed songs. 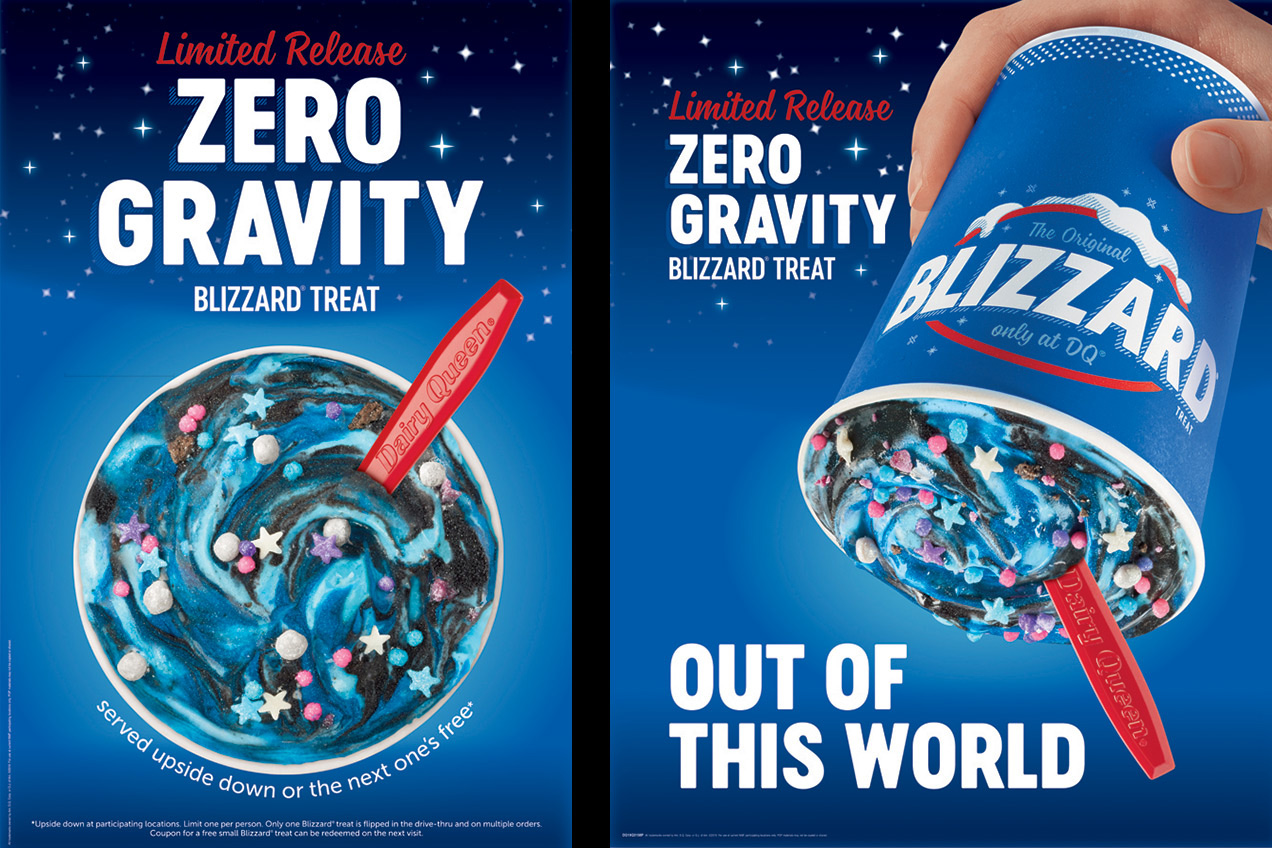 Dairy Queen's Zero Gravity Blizzard, "served upside down or the next one's free."

Shutterstock
As part of the ongoing “It’s Not Stock, It’s Shutterstock” campaign, Shutterstock released a humorous video to “expose” the truth behind the 1969 Moon landing. Playing off the conspiracy theory that the Apollo 11 mission was faked on a Hollywood soundstage, Shutterstock insists in the video that the Moon landing was real—but if it wasn’t, they say, then all the tools you’d need to recreate it could be found on their site.

Elysian Brewing
Craft beer maker Elysian Brewing is throwing it back to 1969 in recognition of the Moon landing’s anniversary, creating the limited-edition Space Dust IPA that comes in special bottles labeled with three unique retro designs, each nodding to a different phase of the mission: “Lift-Off,” “Landing” and “Return.” The Seattle-based brewer is also partnering with the city’s Museum of Flight to kick off the Lunar Block Party, a three-day event celebrating the Apollo 11 voyage.