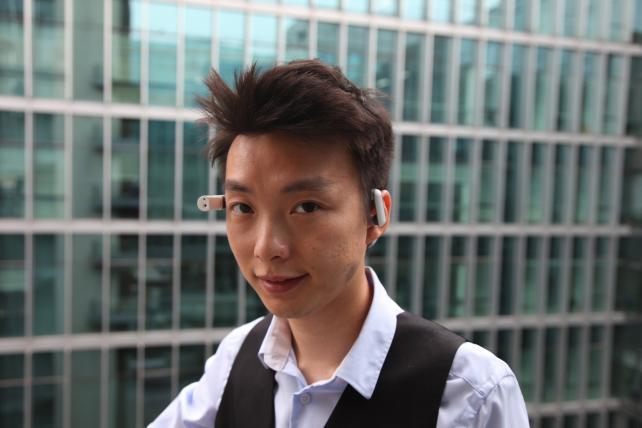 Unlike Google Glass, the BaiduEye is screenless.
Credit: Baidu

Most headlines about the new wearable prototype from Chinese internet search giant Baidu have likened it to Google Glass. But it isn't exactly eyewear; it has no screen and it's not envisioned as something to wear all around town.

The BaiduEye is a headband equipped with a camera, an earphone, a microphone and a connection to a smartphone app. It will get its first big tryout later this year at Chinese luxury retailer Intime, where consumers will be encouraged to slip the devices on to track what they're browsing, get extra product information and connect the online and offline worlds. Baidu sees its Eye as a b-to-b product for now; besides shops, museums are another possible venue for use.

Researchers are still tinkering with the BaiduEye in the company's Institute of Deep Learning in Beijing, which looks like a typical office maze of cubicles, though with more creative clutter. (Baidu also has an R&D lab in Silicon Valley, and its chief scientist is Andrew Ng, a former top researcher at Stanford and Google.)

"We wanted to create a new category of wearable, totally different than smart glasses," said Jiawei Gu, research lead at the Institute of Deep Learning. "Instead of looking at a screen, which can be awkward, you're looking at the object you're targeting," and information comes through the earphone and your smartphone. Other selling points: It doesn't guzzle battery, and people can wear it with glasses.

"Identify this bag"
Mr. Gu slipped the band around the back of his head, picked up a quilted red patent leather Dior purse and asked the wearable to identify it. On his smartphone, information popped up about the handbag and similar purses. 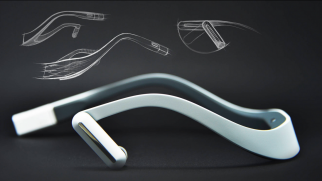 The BaiduEye wraps around the back of the head, so you can wear ordinary glasses with it.

Baidu has focused heavily on visual search. Today, someone using Baidu on a smartphone can scan objects in the real world and watch them appear for sale on their smartphone. Baidu Director of International Communications Kaiser Kuo demonstrated by scanning a colleague's striped shirt, prompting a cascade of similar T-shirts for sale on his phone screen.

The BaiduEye builds on that technology to link what consumers are looking at in brick-and-mortar stores with data in their smartphones, such as what they've searched for before, to get fuller information about them. (The smartphone app would ask shoppers for permission to do that.) Once they've left the store, they could be targeted with mobile ads for products they saw on shop shelves.

The Eye also has uses for sales staff – they could use it to discreetly identify VIP shoppers, for example. Retailers could use its data to improve store layout and the shopping experience.

Offline-to-online and vice versa
Alibaba has dominated news about Chinese e-commerce for months in the buildup to its initial public offering. Baidu is in the camp squaring off against Alibaba for a piece of the prize, and it's betting heavily on offline-to-online technologies, and vice-versa.

Baidu has just partnered with internet giant Tencent and Dalian Wanda Group, a property developer that owns malls, hotels and cinemas, in a $813 million shopping venture. Baidu also invested $10 million in a Finnish company, IndoorAtlas, that makes software to help retailers see how shoppers are navigating their stores.

Online-to-offline commerce is particularly hot in China, since smartphones are such a big part of the culture (the city of Chongqing just set up a special sidewalk lane for all the smartphone addicts, to prevent accidents.)

According to a study this year by Publicis' DigitasLBi, 76% of Chinese smartphone users had bought something on mobile in the last three months; for the U.S., U.K., Germany and Singapore the figure was 35%.

Along with the BaiduEye, the tech giant also unveiled a prototype for a pair of smart chopsticks at a conference this month. In a country roiled by scandals over food safety, the chopsticks (which started out as a joke) could help diners gauge how safe their food is.

The chopsticks "show the growing sophistication of Chinese brand-building," said JWT Shanghai Chief Digital Officer Eugene Chew. "For the PR alone, it was worth it."

Baidu's products, along with upstart smartphone maker Xiaomi's $13 fitness band, are exciting from a Chinese R&D perspective, he said. The BaiduEye could replace audio guides at a museum and be useful at trade shows, helping people catalogue what they're interested in and contact suppliers, Mr. Chew said.

Beyond that, since there's already a trend toward visual and voice-based search, he wonders if hands-free convenience is a big selling point: "I think a lot of people would rather not wear the dorky headphones but just use their phone camera instead."