'Slumdog Millionaire' Director Danny Boyle Says Brands Opt Out of Mumbai Slum Scenes
READ THIS NEXT
How restaurant chains are duking it out to be the best in their categories
Coca-Cola and Mercedes-Benz were put into 'Slumdog Millionaire' by the movie's producers and when asked for permission later, they asked to be cut out.
Credit:

LOS ANGELES (AdAge.com) -- Filmmakers often try to incorporate brands into their projects to lend plotlines a sense of authenticity. But in the case of director Danny Boyle's upcoming release, "Slumdog Millionaire," the footage might be too real: In an interview with Advertising Age, Mr. Boyle said Coca-Cola and Mercedes-Benz demanded that they be excised from key scenes.

Coca-Cola and Mercedes-Benz were put into 'Slumdog Millionaire' by the movie's producers and when asked for permission later, they asked to be cut out.
Mr. Boyle ("Trainspotting," "28 Days Later") went to great lengths to make "Slumdog Millionaire" authentic: He spent a year in India shooting deep in the vast slums of Mumbai, a city where fully half of the 16.6 million denizens live in shantytowns, ghettos or simply on the streets.

In the romantic drama, out in theaters Nov. 12 from Fox Searchlight, a penniless 18-year-old orphan is one question away from winning the jackpot on India's version of "Who Wants to Be a Millionaire?" When he is accused of cheating and interrogated by the police, flashbacks from his harrowing youth in the slums show how he actually learned the answers to the show's seemingly impossible questions.

Strangers with soft drinks
In one flashback, a criminally abusive beggars' syndicate masquerading as an orphanage solicits the protagonist and his brother by offering them a couple of ice-cold Cokes on a hot afternoon.

"We used Coca-Cola bottles on the day of shooting, and we had to paint out the Coca-Cola label [later]. They wouldn't give us permission to let it be seen in the film. You have to apply to these guys for permission. And I'm a bit wild: I tend to use things, then have to go back and ask permission later."

To be clear, neither Coca-Cola nor Mercedes-Benz paid to be integrated into the film. The brands were put in by the movie's producers and when asked for permission later, they asked to be cut out.

A spokeswoman for Coca-Cola, Susan Stribling, said she could find no record of the studio ever requesting permission to use the soda's trademark in the film. She said she could not offer any explanation as to why Mr. Boyle said his creative team at Searchlight had chosen to paint out the logo. A call to a spokeswoman at Fox Searchlight was not returned at deadline.

Goals vary across globe
"Slumdog" presents an entertainment marketing conundrum: Only a handful of companies have the global presence to benefit from the worldwide exposure that a motion picture generates, but they also have widely divergent customer tastes to meet -- and often divergent business priorities. Coca-Cola India recorded an 18% sales spike during the third quarter this year, while in North America, Coke last month announced retail sales declined 1%. Mercedes-Benz India is having its best year since it arrived in on the subcontinent 11 years ago: The automaker saw a 47% jump in sales there for the first 10 months, compared with the year-ago period. But sales in the U.S. have fallen 4.7% year to date, driven by a 25% drop last month, according to the automaker's sales statistics. 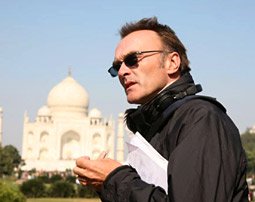 Director Danny Boyle
But Mercedes was not averse to being in the film, just in the scenes of squalor, Mr. Boyle said.

"There is a Mercedes in the other part of the film, in a really nice, posh housing section," he said. "They're quite happy about [the Mercedes] being seen there, but they didn't want it seen driving round the slum!"

A Mercedes-Benz USA spokesman declined to comment, citing unfamiliarity with the request to use the carmaker's trademark and logo in "Slumdog Millionaire."

"In terms of the Western audience, they don't really want to see their products being associated with what they regard as 'slums,' the way that they think of slums, you know?" explained Mr. Boyle. "It's not to do with the Indian perspective of slums, because people in India know that 'slums' is a geographical reference; it's not a pejorative term there at all."

Protecting the brand
In opting out of free promotion in "Slumdog," are Mercedes and Coke being snobbish -- or simply being smart about their global brands?

"That's why they call it 'marketing,'" said Farrah Louviere, director of film at Davie Brown Entertainment, a Hollywood-based entertainment-marketing agency specializing in product integration. "You have to decide what's best for your brands and your market niche -- not all brands are marketed to everyone."

But Ms. Louviere is convinced that in opting out, both companies were simply offering a knee-jerk reaction to the slums of Mumbai, and not thinking about the global implications of doing so.

"I guarantee you that those [Coke and Mercedes] brand managers are not thinking that way. This business is so America-centric that no brand manager is doing their due diligence to see the global impact of these 'simple' decisions. The brand managers I know, they don't get any recognition if they do something to help the global brand's business. The world isn't quite flat yet."