Undaunted and undefeated, Megan Rapinoe and Co. make a statement in the third most-watched women’s soccer match in history
READ THIS NEXT
NBCUniversal will shutter its sports network at end of year 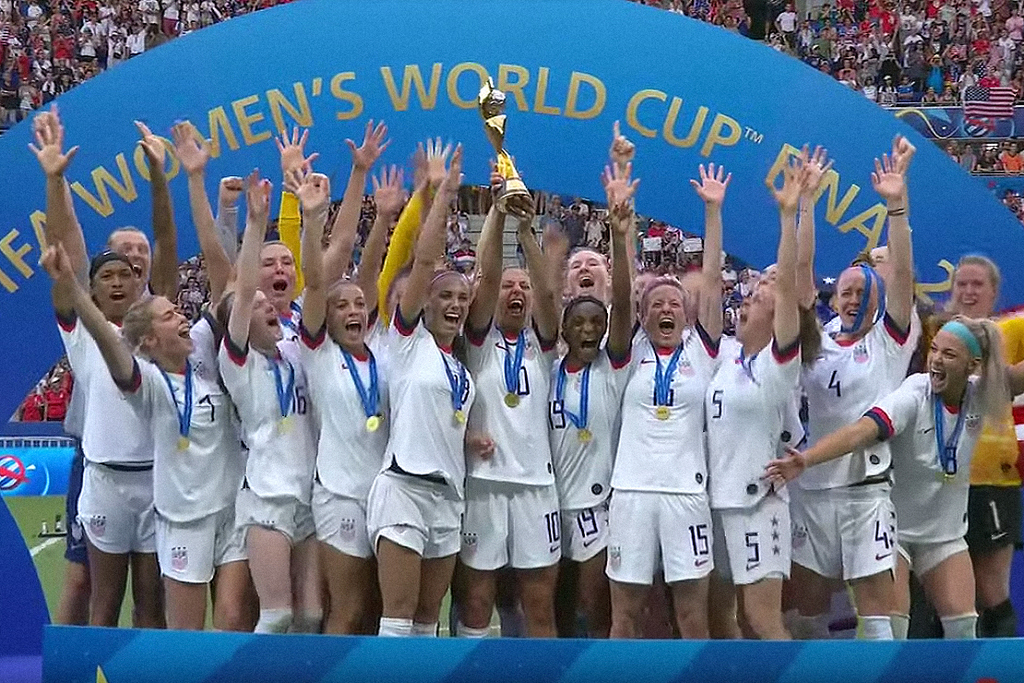 Despite facing a howling squall of criticism from the White House, endlessly tiresome media figures and more than a few sanctimonious former athletes, the U.S. Women’s National Team on Sunday achieved everything it had set out to do and more, winning their second consecutive FIFA World Cup title while making a seemingly irrefutable case for equal pay.

In blanking a formidable Netherlands squad 2-0 in Lyon, the U.S. validated the old “it ain’t bragging if you can back it up” chestnut, silencing the naysayers and pearl-clutchers who found fault with the team’s signature blend of unapologetic swagger. Per Nielsen, the U.S. victory averaged just a hair shy of 14 million linear TV viewers—a number that jumped to 14.3 million upon application of streaming deliveries—making this the third most-watched women’s soccer match in history.

While the Fox broadcast fell well shy of the record 25.4 million viewers scared up by the 2015 U.S.-Japan final, this year’s title tilt aired in a relatively suboptimal time slot. Whereas the previous Women’s World Cup championship was broadcast during the primetime hours, Sunday’s match kicked off at 11 a.m. EDT/8 a.m. PDT.

Given that there was almost no chance that this year’s final would exceed the turnout of four years ago, Fox priced its inventory accordingly. According to buyers, the average unit cost for an in-game spot in the U.S.-Netherlands match came in between $200,000 and $225,000 a pop, well shy of the going rate for the 2015 final—$369,574 per 30-second spot, according to Standard Media Index estimates.

Still, there’s no getting around the fact that the U.S. team’s big win marked another milestone for a sport that’s been long been misunderstood and underestimated by stateside audiences. Sunday’s final now stands as the U.S. Women's National Team's third most-watched match in the organization’s 34-year history, trailing only the mammoth 2015 final and the iconic 1999 title game. Tied 0-0 after extra time, the U.S. sank all five penalty kicks to beat China in front of a crowd of 90,000 fans at the Rose Bowl and 18 million TV viewers.

American youth soccer could use the shot in the arm administered by Sunday’s big win. According to a recent study from the Sports & Fitness Industry Association, the number of 6-to-12-year-olds that regularly play soccer fell 14 percent a year ago to 2.3 million, and fewer than half of those budding strikers are girls. Stretch the parameters to include high school teams and the numbers are a bit higher, with current estimates putting the total number of girls who participate in organized soccer at around 2 million.

If U.S. teammates Megan Rapinoe, Alex Morgan and Rose Lavelle were instrumental in getting more young people out onto the pitch, the women’s team as a unit may have forced their own national federation to finally confront the gender discrimination that treats world champions like second-class citizens. While the compensation structure is complicated by a number of factors, the USWNT demonstrably make far less money for their on-field efforts than do their male counterparts.

Despite having won four World Cup titles and appearing in five of the eight final matches going back to 1991, the USWNT’s compensation is a fraction of the men’s team’s. (In the TV era, the men have never managed to get past the Round of 16.) According to the lawsuit filed by members of the 2015 women’s team in March, the U.S. Soccer Federation paid the men’s team a bonus of $5.4 million after they were bounced from the 2014 World Cup by Belgium. In contrast, the U.S. women’s squad received just $1.7 million after winning the World Cup the very next year.

The base salary of a player on the women’s national team is $30,000 less than a male player’s wages. Including bonus compensation, the USWNT’s take-home pay is nearly 40 percent lower than that of the men’s team. Winning percentages aside, the women also are a bigger draw than the men, as their matches between 2016 and 2018 generated nearly $2 million more in revenue than the men’s games.

However the lawsuit shakes out, the USWNT’s advocacy efforts have not gone unnoticed. As FIFA President Gianni Infantino greeted the triumphant Yanks during the postgame ceremony, fans in the Stade de Lyon could be heard shouting, “Equal pay! Equal pay!” Back at home, Twitter erupted with emoji-laden calls to pay the women what they are worth.

At the center of it all was Rapinoe, the fearless leader who was as comfortable scoring clutch goals as she was using the tournament as a platform for progress. When not getting under the skin of President Trump or demanding equal treatment from U.S. Soccer, Rapinoe scored the winning goal in no fewer than three matches, including the second-half penalty kick that decided Sunday’s outcome. For her efforts, the co-captain was awarded the Golden Boot, making her only the second American player to be recognized as the most prolific scorer in a World Cup. The 34-year-old would go on to further strain the capacities of her carry-on bag with the addition of the Golden Ball trophy, which is presented to the tournament’s top player.

Among the brands that bought time in the run-up to the U.S. team’s date with destiny were Nike, Volkswagen, Walt Disney Pictures (“Mulan,” “The Lion King”), Wells Fargo, SoFi,Verizon, Google Nest, State Farm, Hotwire, Geico, Coca-Cola, Visa and Pizza Hut. As was the case throughout the month-long tourney, Verizon on Sunday served as the presenting sponsor of Fox’s pregame show “World Cup Live,” while USWNT sponsor Volkswagen held down the same role during the postgame broadcast “World Cup Today.” Coca-Cola was the presenting sponsor of Fox’s halftime show.

Also grabbing a nice chunk of airtime was official USWNT sponsor Budweiser, which earned millions of impressions as several of the players chugged the brew during their locker room celebration. (French sensibilities were represented by the dozens of bottles of Veuve Clicquot Brut that made the rounds as the team toasted their success.)

Sunday was a busy day for Budweiser. In a full-page ad that ran on the back page of the sports section in Sunday’s New York Times, the beer brand announced that it had signed on as the official sponsor of the National Women’s Soccer League. Over a back-and-white photo of Rapinoe in action for Spokane’s Reign FC squad, Budweiser encouraged World Cup watchers to keep their attention trained on the U.S. players as they made their way back to their respective club teams.

“Today, Budweiser is proud to announce that we are the official supporter of the National Women’s Soccer League,” the print copy read. “We will support the game and these deserving athletes every single day, [and] not just every four years.”

The USWNT will continue the celebration in Manhattan Wednesday morning, as the squad will be paraded down the island’s Canyon of Heroes. The U.S. women were honored with a similarly confetti-strewn trip from the Battery to City Hall after winning the 2015 World Cup.