Hey, media, here are 9 photos of Melania Trump you don't have to pay her to use | Ad Age
Skip to main content

Hey, media, here are 9 photos of Melania Trump you don't have to pay her to use

By now you've probably seen the NBC News scoop—"News media paid Melania Trump thousands for use of photos in 'positive stories only'"—about the peculiar way the first lady has been profiting from the demand for images of her. As Andrew W. Lehren, Emily R. Siegel and Merritt Enright of NBC News report,

Since her husband took office Melania Trump has earned six figures from an unusual deal with a photo agency in which major media organizations have indirectly paid the Trump family despite a requirement that the photos be used only in positive coverage. President Donald Trump's most recent financial disclosure reveals that in 2017 the first lady earned at least $100,000 from Getty Images for the use of any of a series of 187 photos of the first family shot between 2010 and 2016 by Belgian photographer Regine Mahaux.

As a public service to the unwitting—and generally cash-strapped—media, Ad Age would like to take this moment to remind everyone of the existence of the official White House Flickr account, which contains public domain images (i.e., there is no cost associated with publishing them) of not only President Trump doing presidential things (kinda), but his wife doing first lady things (more or less).

Scrolling through the 1,408 (and counting) images posted since 2016 by the Trump Administration is an interesting exercise in and of itself: These are official White House photos—ergo, this is how Team Trump wants us to see it.

A search suggests that Melania Trump appears in 380 of those images—though, strangely, she's not actually seen in every one of them; for instance, a photo captioned "First Lady Melania Trump visits China | November 10, 2017" shows a panda bear, but not Melania Trump. Fake news!

Ad Age Creative Director Erik Basil Spooner did, though, find an image of Melania with the panda bear—which, again, is in the public domain, so it can be used for any sort of coverage, positive or negative. 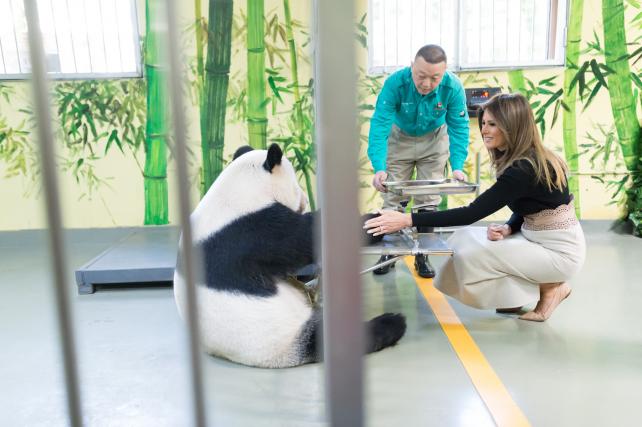 We would hope that no media organization would run this photo with the caption "First Lady Melania Trump visits a panda bear jailed under her husband's 'zero tolerance' immigration policy"—but, again, Melania Trump (and Getty Images, for that matter) has no say in the matter.

Anyway, please proceed with caution as you scroll through this gallery of additional White House Flickr photos selected by Erik: 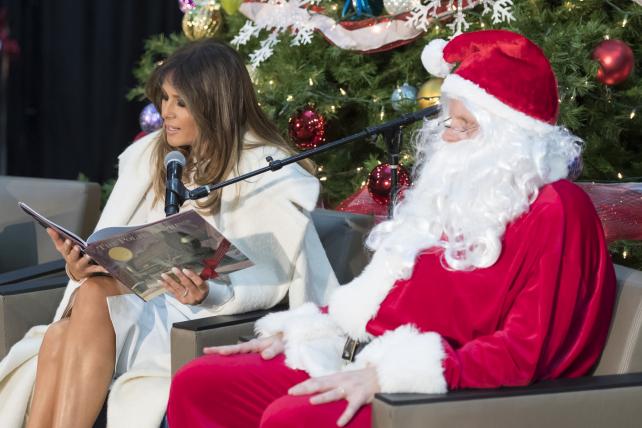 Her husband may be berating traditional American allies across the globe, but apparently Melania still maintains good relations with the North Pole. 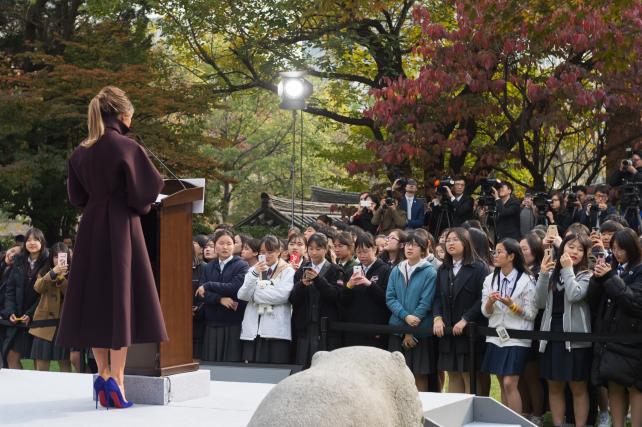 One curious thing about the official White House Flickr feed: It's mildly obsessed with showing the back of the first lady's head. We agree that she has nice hair, but it looks good from the front too. 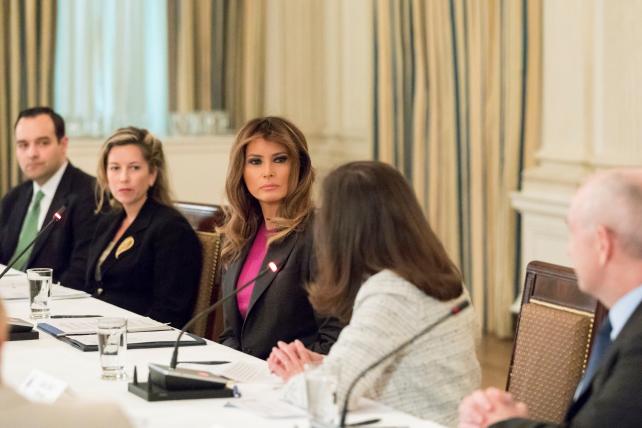 Did you know that the first lady participated in something called the Cyber Security and Technology Roundtable, where she took a moment to convey "Who are you and WTF am I doing here?" with the look on her face? Do you feel more cybersecure now? 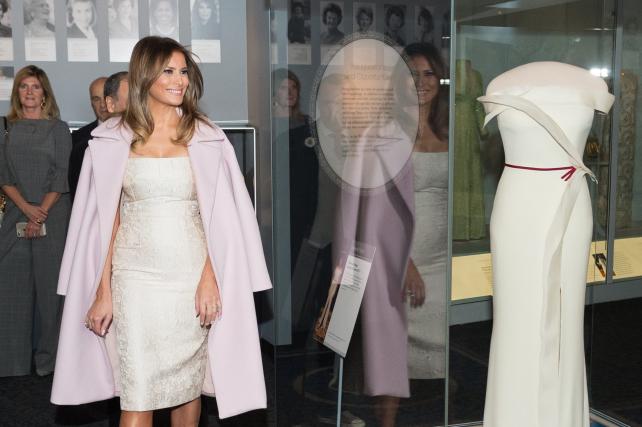 First Lady Melania Trump at the presentation of her inaugural gown at the Smithsonian National Museum of American History.

In addition to caring about cybersecurity and technology, the first lady also famously cares about fashion. Here, she checks out one of her hand-me-downs. 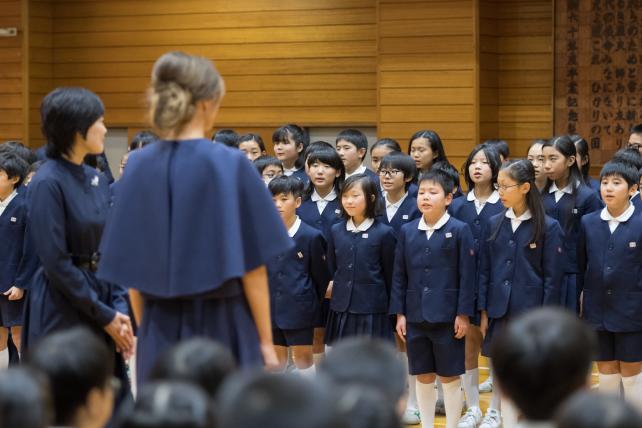 Melania Trump on the presidential trip to Japan, greeting a school group.

Seen here: The back of Melania Trump in Japan. 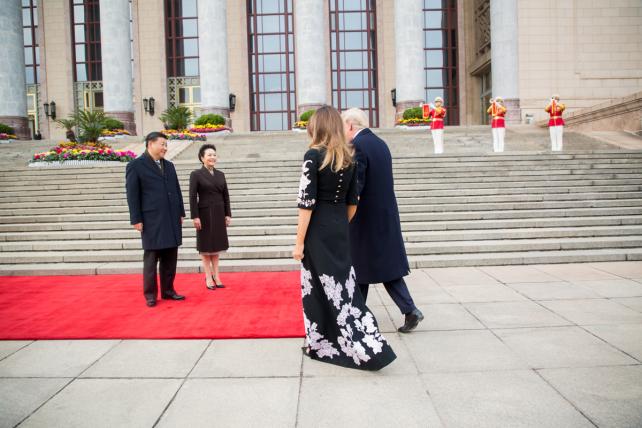 The back of Melania Trump also visited China. 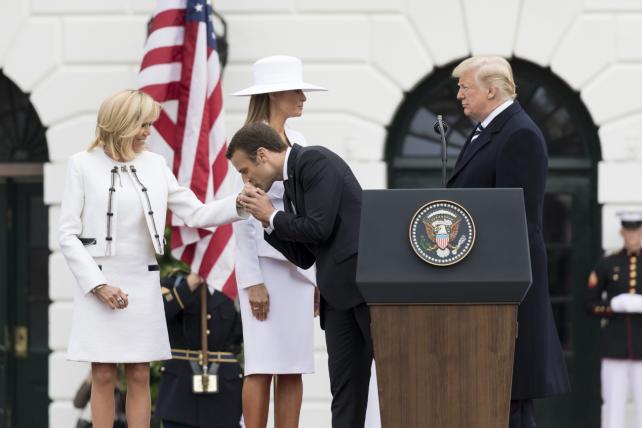 The arrival ceremony of the president of France and Mrs. Macron. 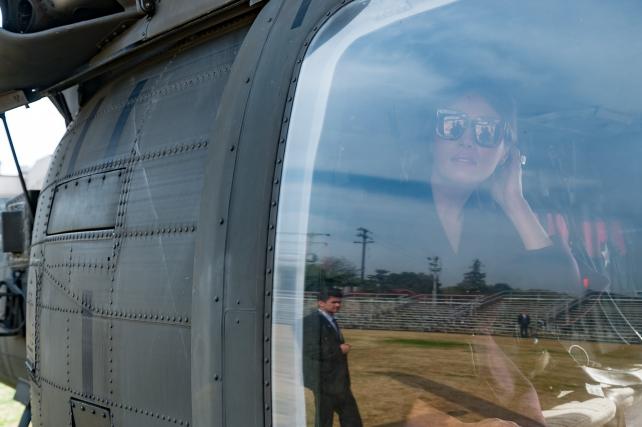 And finally, arguably the most moody shot of the first lady in the White House Flickr stream. You should read nothing into her expression here. Literally nothing.