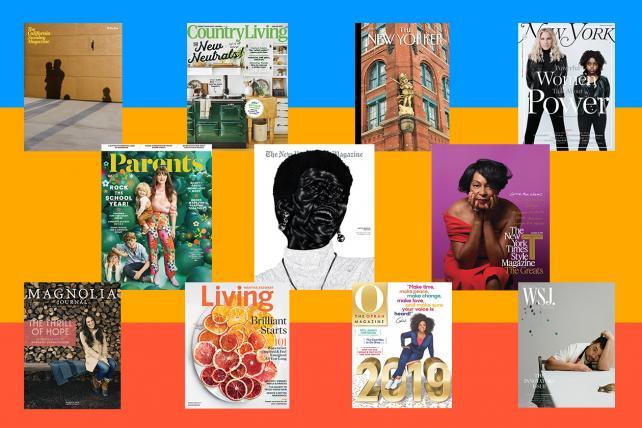 EDITOR'S NOTE: For 2019, we've expanded our annual publishing-industry honors program. It's now known as the Ad Age Publishers A-List and it includes the Magazine A-List, below, plus a new set of Digital Publishers A-List honorees. Read the introduction and find links to the other portions of the package here.

Founded in late 2014 by Douglas McGray and Chas Edwards, The California Sunday Magazine is a six-times-a-year glossy that's distributed to 350,000 subscribers of the Los Angeles Times and San Francisco Chronicle. Under Editor-in-Chief McGray, the title is gloriously, well, magaziney—serving as a forum for longform reporting (e.g., Mark Arax's epic 20,000-word feature "A Kingdom From Dust," about Big Agriculture, water and immigrant labor). It's won scores of honors in its short life, including three National Magazine Awards, and its photojournalism is so stellar that the current photo-essay issue, "At Home: In the American West," became a gallery exhibition at New York's prestigious Aperture Foundation. Publisher Edwards has lured in big brands such as Coach and Google Pixel (which sponsored "At Home"), and together with McGray helped secure the most impressive validation yet: their magazine's late-November acquisition, along with sibling events division Pop-Up Magazine (see our Event Publisher A-List), by Laurene Powell Jobs' Emerson Collective.

Print ad pages are up again (5 percent year-over-year) at Hearst's 1.4-million-circ Country Living. Editor-in-Chief Rachel Hardage Barrett continues to nail a breezy, folksy tone, particularly in cover packages (e.g., The Small Wonders Issue, The Thrill of the Hunt Issue), and Associate Publisher Michelle Balaz and her team keep coming up with innovative executions for brands. See, for instance, a special ad unit for Go RVing that folded out of the July/August glow-in-the-dark cover, which, in daylight, showed a family roasting marshmallows around a campfire—and in the dark (in glow-in-the-dark ink) the headline "Away We Glow!" over an illustration of a mason jar filled with fireflies. That issue not only delivered the highest ad-page count since 2013 but was a newsstand best-seller.

Under Editor-in-Chief Adam Moss and Print Editor Jared Hohlt, New York Magazine's 400,000-circ fortnightly continues to triumph. The news-driven features dive deep behind the headlines—see the March 3 "How to Raise a Boy" package (about growing up "in the era of Parkland, President Trump, and #MeToo") and the prescient April 2 "It's the Corruption, Stupid" cover (Jonathan Chait's take on why the president's "self-dealing is his biggest political liability"). The culture coverage is brilliant (see Rebecca Traister's columns on #MeToo, which won a National Magazine Award in 2018, and Jerry Saltz's art criticism, which took home a Pulitzer). And Chief Revenue Officer/Publisher Avi Zimak and his team keep luring in big brand advertisers with smart executions, such as the Design Beyond Fellowship for emerging interior designers sponsored by Delta Faucet, which crossed over from the print edition to online lifestyle vertical The Cut (see our Digital A-List).

Among the many uniquely unique things about Condé Nast's The New Yorker is the extent to which its readers are willing to open their pocketbooks to support it. In 2018, circulation hit an all-time high (1.27 million), and consumer revenue now accounts for two thirds of total revenue. Editor-in-Chief David Remnick keeps building out his dream team (e.g., hiring former Politico editor Susan Glasser and Slate staff writer Osita Nwanevu to bolster D.C. coverage) and doubling down on investigative journalism (the magazine won the 2018 Pulitzer Prize for Public Service for Ronan Farrow's reporting on Harvey Weinstein—and Farrow's August report about CBS chief Les Moonves ultimately led to his shocking downfall). Chief Business Officer Chris Mitchell and his team oversaw another year of overall revenue growth (up 4 percent) by creating winning executions for marketers including Qualcomm and Charles Schwab that leveraged print and The New Yorker's white-hot digital division (see our Digital A-List).

Under the direction of Editor-in-Chief Liz Vaccariello, Meredith's Parents goes beyond traditional parenting-mag service to address what the magazine calls "the serious work of raising future citizens" in feature stories such as "What Science Really Says About Boys and Girls" and "50-50 Parenting. For Real." Circ has held steady at 2.2 million—no small achievement for a title that regularly sheds readers as they age out of the target market—thanks to a major redesign meant to attract a new generation of millennial moms. Under SVP/Group Publisher Mark Josephson, the September issue, the one-year anniversary of the redesign, was the most ad-stuffed (105 pages) in three years, and full-year ad-paging grew 2 percent.

One of the world's greatest newspapers publishes one of the world's greatest magazines. Under Editor-in-Chief Jake Silverstein, The New York Times Magazine deftly mixes thoughtful culture features (e.g., Sam Anderson's examination of "The Good Place" as "a sitcom that's also a profound work of philosophy") and fearless, searing foreign reporting (Robert F. Worth's "Can Yemen Survive Saudi Arabia's War?"). The thematic specials have been insanely ambitious—for instance, the May 19 New York Issue, which featured a split run of 24 different covers of New York couples-in-love kissing, all shot in one day around the city by celebrated artist Ryan McGinley in an ad hoc studio set up in the back of a rented tour bus. Or the Aug. 5 Climate Issue, which contained just one long story about the unfolding of the climate crisis, a bravura act of historical reporting by Nathaniel Rich (Apple acquired the dramatic rights for a TV series). Publisher Maggie Kiselick has been smartly leveraging the magazine's editorial heat to lure major marketers into the weekly—including GE, the sole sponsor of the Sept. 23 Voyages Issue, which had lavish photography, hardly any text and a remarkable audio component: a companion streamable soundtrack available online (see our Publisher Audio/Podcast A-List). And the Times Mag has been a magnet for industry honors, including a 2018 National Magazine Award ("Ellie") for Reporting.

Under Editor-in-Chief Hanya Yanagihara, T: The New York Times Style Magazine also took home an Ellie—for General Excellence in the Service and Lifestyle category. Acclaimed novelist Yanagihara ("A Little Life") has brought an artist's sensibility to reimagining T since taking the helm in the spring of 2017. A front-to-back redesign engineered by Creative Director Patrick Li debuted with the Feb. 18 Women's Fashion Issue. And the thematic specials—such as the April 22 Culture Issue, which focused on New York from 1981–83 (a turning point in art, music, theater and more for the city and the nation)—are so beautifully rendered they feel like works of art themselves. Like her colleague at the Times Mag, T Publisher Elizabeth Webbe Lunny leverages her glossy's editorial heat to attract major brands, including Dom Pérignon, which sponsored T's annual Greats Issue across print and digital.

This time last year, there were reasons to worry about The Magnolia Journal, Meredith's quarterly magazine led by Editor-in-Chief Joanna Gaines—one half of HGTV's "Fixer Upper" team along with husband Chip. That's because the couple had announced they were walking away from the home-reno hit after five seasons (the last fresh episode aired on April 3). But interest in the Gaines' lifestyle empire—which includes furniture, home decor and fashion—hasn't waned, and Meredith increased the magazine's rate base to 1.2 million (up from 800,000). Ad inventory is limited by design to 25 pages per issue. Given the bump in circ (and thus ad rates) and a full slate of four issues (vs. just three during 2017's launch mode), SVP/Group Publisher Mark Josephson has overseen a 135 percent year-over-year increase in print ad revenue. The magazine is lovely—a pitch-perfect expression of the Gaines/Magnolia lifestyle aesthetic. And in November Discovery announced that it's in negotiations with the Gaineses to take over one of its cable channels, à la Oprah and OWN.

Former independent magazine Martha Stewart Living has been under the Meredith umbrella since 2015, when the Des Moines, Iowa-based publisher took over operational and editorial control in a licensing deal. Over the years, various Martha wannabes have come and gone, and while we salute Meredith for teaming up with Joanna Gaines, one of the only truly convincing Martha-esque rising lifestyle gurus, we're pleased that four years later, Meredith's partnership with the Martha continues to pay off. Under Editor-in-Chief Elizabeth Graves, MSL continues to be the gold standard of lifestyle glossies, and under SVP/Group Publisher Christine Guilfoyle, ad revenue has held steady (even as the food and shelter-mag categories declined overall in 2018), thanks to new or increased business from brands including Kimberly-Clark, Subaru, Starbucks and Tito's Vodka.

Under Editor-in-Chief Lucy Kaylin, O, The Oprah Magazine continues to fire on all cylinders. Circulation is up to nearly 2.4 million, and the Hearst title remains one of the top 10 monthlies at the newsstand; the December "Oprah's Favorite Things" issue, for instance, moved more than 200,000 copies. In 2018, O increasingly took its core message of empowerment into the political realm; see, for instance, November's "Your Vote Can Save a Life," a powerful piece by Robyn Thomas, executive director of the Giffords Law Center to Prevent Gun Violence, about the "public-health crisis" of gun violence. Under Publisher Jayne Jamison, ad pages held steady—a huge win amid an exceptionally difficult year for women's glossies.

Turning 10 in 2018, The Wall Street Journal's WSJ Magazine (or WSJ. Magazine, as it's officially styled) had a very good year to mark that milestone. Editor-in-Chief Kristina O'Neill helms a luxury lifestyle title with culture coverage that surprises (see the March Keith Richards cover) and dazzles (e.g., the annual Innovator Awards issue, which was celebrated with a fête at the Museum of Modern Art, complete with a performance by honoree John Legend). Under Publisher Anthony Cenname, WSJ's September Women's Fall Fashion Issue was the biggest revenue producer in the history of the magazine—a remarkable achievement in a year when fashion brands slashed their glossy budgets. Of note: Though the website of WSJ's newspaper mothership lands on our Digital A-List, the magazine is itself revving up its own online presence, having created and filled three new positions—digital director, digital editor and senior platform editor—in 2018, funded by rising digital revenue. Stay tuned.

Meredith was already home to glossy brands, including Better Homes and Gardens, Family Circle, Martha Stewart Living and Traditional Home, that resonate in the heartland. But in taking on Time Inc. titles including People, InStyle and Real Simple, it dramatically deepened its reach, offering marketers a cross-brand, multimedia platform that connects with 175 million American consumers each month, including 80 percent of millennial women.

Meredith also went on a hunt for new homes for a number of Time Inc. titles that didn't fit into its portfolio. The company admirably did not rush the process, taking the better part of a year to do surprisingly robust deals with Salesforce chief Marc Benioff and his wife, Lynne, to buy Time for $190 million and Thai businessman Chatchaval Jiaravanon to acquire Fortune for $150 milion. (Buyers for Sports Illustrated and Money are expected to be announced soon.)

The team that made all of this happen: Steve Lacy, executive chairman of the board; Tom Harty, president and CEO; and Jon Werther, president of the Meredith National Media Group. Two other executive players—Joe Ceryanec, CFO, and John Zieser, chief development officer and general counsel—have also been central to making the numbers work across the deals, and helping to manage both the integrations and divestments. For making 115-year-old, Des Moines, Iowa-based Meredith the new No. 1 U.S. publisher, they're our Magazine Publishing Executive Team of the Year. 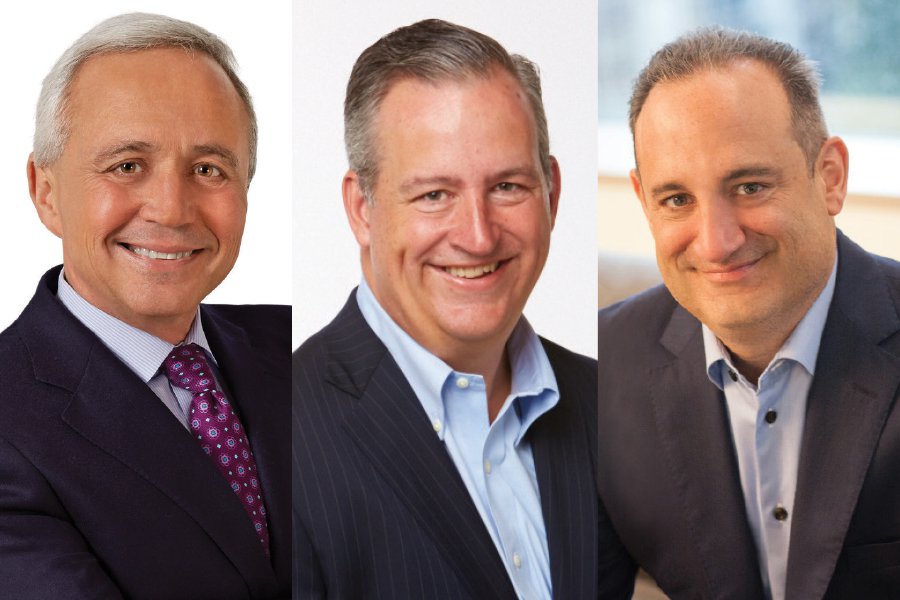