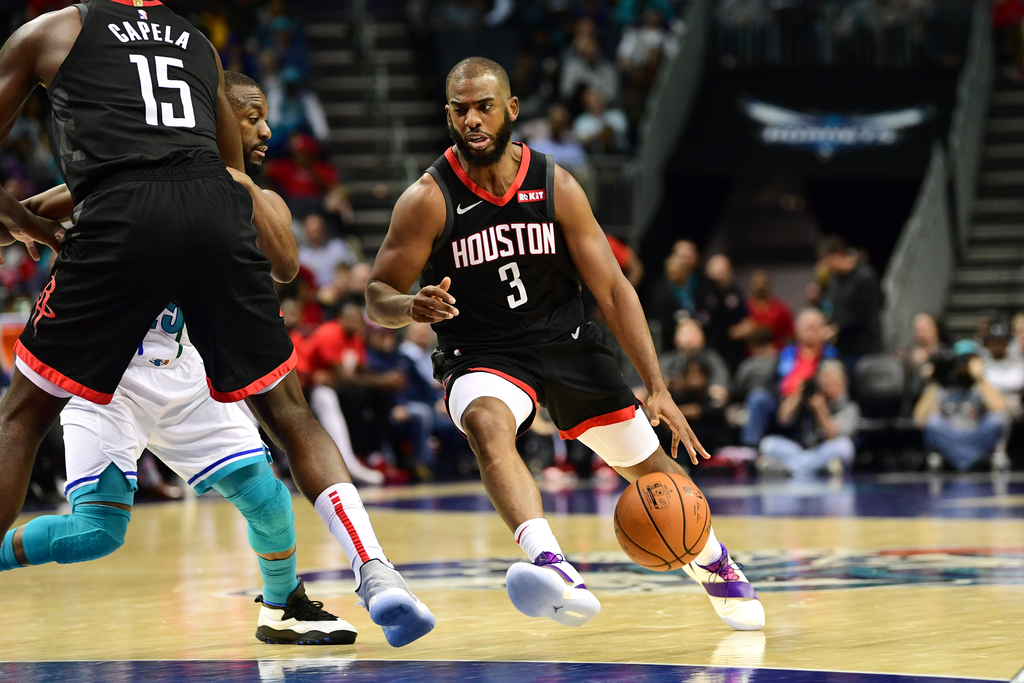 Chris Paul (3) of the Houston Rockets during a regular season game on February 27, 2019 at Spectrum Center in Charlotte, NC.

AT&T Inc. is weighing a sale of its regional sports networks as part of a plan to cut as much as $8 billion in debt by the end of the year, according to people familiar with the matter.

The four regional networks, which includes rights to teams such as the hockey’s Pittsburgh Penguins, basketball’s Houston Rockets and baseball’s Seattle Mariners, could fetch close to $1 billion, according to the people, who asked not to be identified as the deliberations are private.

Sinclair Broadcast Group Inc., which agreed in May to buy 21 Fox regional sports networks from Walt Disney Co. for $9.6 billion, could be among the potential buyers, the people said. John Malone’s Liberty Media Corp. and Ice Cube’s Big3 U.S. basketball league were among the other bidders for the Fox assets.

A sale of the regional sports networks—known as must-see content for avid fans—highlights AT&T’s ongoing struggle to fix a debt-heavy balance sheet. The company, which has to spend money on a number of priorities, including an expansion of its 5G wireless network, has been financially handcuffed after amassing more than $180 billion in debt with the acquisitions of DirecTV and Time Warner Inc.
AT&T Priority

Despite a steady decline in TV subscribers, AT&T Chief Executive Officer Randall Stephenson has said the company’s top priority this year is to reduce debt. As part of that plan, he has been raising cash by selling holdings, including its stake in Hulu and its New York offices. The two deals fetched $3.6 billion in proceeds.

The sale would make sense for AT&T because the teams and the conferences in the regional networks have been seeking richer terms, knowing live sports attracts viewers. AT&T might see the sale as a way to “get rid of the high costs and use the cash to buy down more debt,” said Roger Entner an analyst with Recon Analytics LLC.

Sinclair’s purchase of the Fox networks from Disney is still subject to approval from the Justice Department and the Federal Communications Commission. Last week three senators and presidential hopefuls—Cory Booker, Bernie Sanders and Elizabeth Warren—wrote a letter to the FCC and Justice Department expressing their concern over the increased costs to cable and satellite consumers.