A Q&A With Media Vanguard Award and Digital Ellie Winner David Granger
READ THIS NEXT
ViacomCBS tests national addressable ads with Dish Media
At the moment this photo of David Granger was taken, Javier Bardem was saying 'Welcome to Esquire' from the app's cover.
Credit:

Earlier this month, Esquire won a National Magazine Award for Digital Media -- the first Mobile Edition prize -- from the American Society of Magazine Editors. (See my colleague Thomas Pardee's report on all the so-called Digital Ellies here.) The fact that the Hearst men's monthly has an excellent iPad app is no surprise if you've ever downloaded it -- or if you're an Ad Age reader, because Esquire's app won an inaugural Media Vanguard Award last November (see the complete list of winners over here).

Ad Age launched the MVAs (as we explained last summer) to recognize the efforts of publishers and broadcasters -- both traditional/mainstream and web-native -- that are finding innovative, tech-driven means to extend their franchises and connect with audiences in new ways. (By the way, the entry window for the 2011 Media Vanguard Awards will be announced soon; stay tuned.) We also thought of the MVAs as a way to move the conversation about the new new media forward. To continue that conversation, we're kicking off a weekly interview series that follows up with selected MVA recipients to find out more about the making of their digital products and what's been happening since their win.

The star of the first installment: Esquire Editor in Chief David Granger.

Simon Dumenco: Let me start with a personal question: What's your single favorite thing about doing the Esquire iPad app so far? Like, an animation or other capability that you personally think is just really cool?

David Granger: My favorite thing is the increased opportunities for humor; the technical term is "humor opps." Making a magazine 10% funnier makes it at least 35% more appealing to a reader. Most of the things we do specifically for the pad are funny, whether that's getting Matthew McConaughey to undress on our April cover or animating the incidental illustrations in the magazine. The app is just funnier. And the 14,000-word Turgenev novella we offered with one issue was a laugh riot.

Mr. Dumenco: [laughter] Yeah, and I was surprised at how good Turgenev looks shirtless… OK, so, what's the single most annoying thing about doing an Esquire app so far?

Mr. Granger: Is that a trick question? What could be annoying about doing something really great that is impossible to market, that may or may not be published on schedule and causes people to write you nasty letters asking why they can't subscribe?

Mr. Dumenco: [laughter] Apple really does need to invent some sort of digital blow-in card that falls on your lap as you're reading a magazine app. Speaking of Apple, what's been your experience dealing with them and their app approval process? I remember you telling me at the Media Vanguard Awards reception that there was a mysterious wait for your second iPad issue to get OK'd and released by Apple.

Mr. Granger: Apple is getting more responsive with every issue, but we had some delays early on. Our November issue, for instance, came out the same day as our December issue. Lately it's been taking about 10 working days to get approved -- sometimes more, sometimes less, depending on whether there are any technological glitches.

Mr. Dumenco: Actually, talk to me a bit about the technology before you send the app to Apple. It's obvious that you've rejiggered how you produce edit so the print production process also yields material you can use for your app. Did your design and art-production teams work from a master plan of some sort developed at the time of the release of iPad 1.0?

Mr. Granger: If you'd read my guest column in Publishing Executive magazine this month, you would know that each part of Esquire -- print, web and e-reader efforts -- works in perfect harmony to create editorial offerings that benefit the magazine, the reader and make the world a better place. 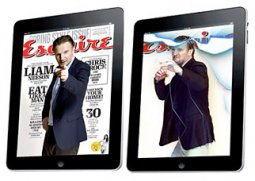 Mr. Granger: It's practically nirvana. [laughter] But, specifically, we added planning meetings for the pad to our weekly schedule, in which we try to come up with ideas for the app that are specific to each issue. Some stories can't really be improved on. And then there are others for which we decide to do fairly elaborate productions -- like the music festival we're creating for the May app that will raise money for a charity.

Mr. Dumenco: What charity? And how's that going to work?

Mr. Granger: For our May fashion portfolio, we got five musicians to participate in a songwriting competition. We did it in Detroit, to encourage the budding revival of the city. We gave them all a single phrase, "Last night in Detroit," and asked them to create a song. The artists and their labels are allowing us to sell each of the songs via iTunes and the proceeds will go to Big Brothers/Big Sisters of Detroit, which was the charity Mayor [Dave] Bing's office suggested. This year, the five artists are the soul superstar Raphael Saadiq, Brendan Benson [The Raconteurs and other bands], Dierks Bentley [multiplatinum country-music star], Dhani Harrison [EMI recording artist and son of George Harrison ] and a Detroit legend named Ben Blackwell who happens to be Jack White's nephew. We'll promote the whole thing with mini music videos on our site and we'll present the videos on the app, with in-app purchase opportunities.

Mr. Dumenco: Wow, that sounds cool. You know, that has me wondering: Do you generally get to put budget against what you're doing specifically for the iPad? Like, is there a budget for videography that you didn't have pre-iPad? Or were incremental costs just sort of folded into the multimedia efforts you were already doing for Esquire.com?

Mr. Granger: Over the last three years -- really beginning when we shot Megan Fox with the Red One camera so that we could do the charming video "Good Morning, Megan," we've been asking photographers to work with us on enhancements of what we do in print. That probably peaked with our Augmented Reality issue, and now we ratchet that kind of thing up to benefit both the pad and the site. And, yes, there are additional costs that go along with creating original stuff for the pad. As proficient as we've needed to become at doing stuff for free, good film editing, for example, costs money.

Mr. Dumenco: Speaking of money, I know Hearst isn't releasing sales figures for its various mobile apps yet -- and, in fact, the magazine industry as a whole has yet to settle on a standardized app-sales reporting system -- but as a guy who is used to having to pay close attention to newsstand numbers, how much are you worrying about iPad edition sales?

Mr. Granger: I'm not going to stress too much about sales until we get a sub agreement done with Apple. Then we'll begin to see the potential of the application. The interesting thing, though, is that, unlike conventional newsstand, issues keep selling forever. We still sell copies of our October application.

Mr. Dumenco: Huh -- I hadn't thought of that. Actually, I sort of like the idea of a digital version of the Collyer Brothers -- hoarders who, instead of having homes crammed with magazines and newspapers, have maxed-out flash memory drives on their tablets. Hey, there's a marketing opportunity right there: You'll never get crushed to death by a falling tower of back issues of Esquire if they're all on your iPad. Also, no scratch-and-sniff scent strips!

Mr. Granger: I know that we can and will do scratch on our pad app. So far, though, sniff is a problem.

Edited and condensed from a longer interview.