People who want to subscribe to Popular Science's iPad edition can now do so by tapping a button within the app itself. 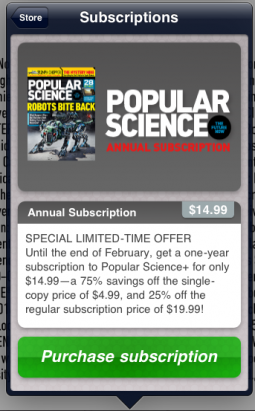 Popular Science had originally planned to introduce iPad edition subscriptions last summer, but Apple and magazine publishers wound up spending the rest of the year wrangling over terms for a subscription mechanism. Magazine publishers wanted the same subscriber information that they've always used to pitch related products and describe subscribers to magazine advertisers, but Apple didn't want to share that information.

Under the plan Apple announced today, publishers who sell an iPad edition subscription on their own websites or through direct mail can have all the consumer information they gather. But when subscribers sign up within iTunes, Apple will keep their information to itself -- unless they specifically opt in. Apple will also keep 30% of the revenue in that case, but that's not publishers' sticking point. They want to know who their subscribers are and how to reach them. 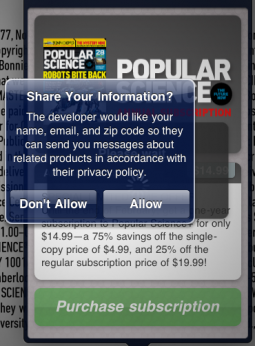 People who subscribe to Popular Science's iPad app from within the app are greeted with a prompt headed "Share your information?"

"The publisher would like your name, email and ZIP code so they can send you messages about related products in accordance with their privacy policy," the dialogue box says. Subscribers then must choose between "Allow" and "Don't Allow."

Some publishers are afraid that very few consumers will press "Allow," but Popular Science called this a good start.

"What we are excited about is the fact that people will be able to opt in and share their email addresses and allow us to communicate with them," said Gregg Hano, VP-group publisher of the Bonnier Technology Group, whch includes Popular Science. "In this evolving space, we think this is a great move in the right direction."

The magazine can also go back to subscribers and ask them again later whether they'd like to share their information, Mr. Hano said. "We look forward to having a closer relationship with both our readers and our partners in Apple to continue to grow this ecosystem and this business," he said.

Time Inc., the publisher of giant titles such as People and Sports Illustrated, suggested Tuesday that it is not ready to accept the subscription plan that Apple has described. "It seems like Apple is taking a step towards our position on subscription offerings, but the announcement also raises many questions around consumer data we would need to work through and agree on," a spokesman said.

Another publisher suggested that it, too, wasn't satisfied yet. "We're waiting to see how Apple's sub model will evolve before jumping in," an executive there said.

The subscription will renew automatically every year unless the subscriber cancels it. A single issue of Popular Science still costs 4.99 on the iPad.