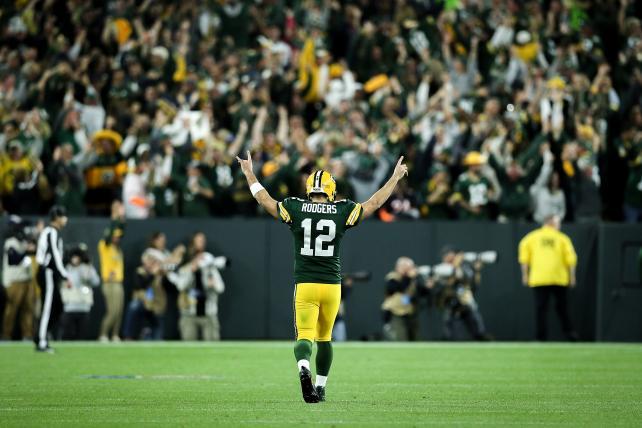 Ratings for the first Sunday of the new National Football League season rebounded from last year's iffy deliveries, as three of the four TV windows put up bigger numbers than the analogous broadcasts in Week 1 of the 2017 campaign.

According to Nielsen live-plus-same-day data, both the early afternoon regional window and the "America's Game of the Week" showcase on Fox scared up higher ratings than did their year-ago counterparts, while CBS's 1 p.m. EDT regional slate earned bragging rights as Sunday's biggest gainer. Only NBC's "Sunday Night Football" debut failed to top its Sept. 10, 2017 deliveries, and even so the declines were not particularly overwhelming.

This is welcome news for the roster of advertisers that have stood by the NFL despite two years of steady ratings declines and a seemingly unending cycle of on- and off-field controversies that are often exacerbated by President Trump.

(As it happens, our Aug. 29 ratings forecast for Fox's Cowboys-Panthers game was off by a mere tenth of a point in total viewers and households. Behold.)

Runner-up NBC averaged 22.1 million viewers and a 12.5 household rating with its first "Sunday Night Football" broadcast (Chicago at Green Bay), which worked out to a decline of 9 percent and 7 percent, respectively, compared to last year's Giants-Cowboys blowout. Featuring the NFL's biggest TV draw in Dallas and the representatives of the nation's largest media market (New York), that NFC East grudge match averaged 24.4 million viewers and a 13.4 rating, which would prove to be a high-water mark for NBC's 2017 NFL season.

That the Bears-Packers' instant classic of a game didn't beat out last year's comparable broadcast likely had to do with the scenario fans were presented with during the second quarter, when Green Bay quarterback Aaron Rodgers went down with what appeared to be a destabilizing knee injury. At halftime, and with no indication that Rodgers would return from the locker room, the Packers were down 17-0. TV viewers, which at the time Rodgers went down numbered around 23.4 million strong, headed for the exits.

In what has already become the stuff of legend, Rodgers hobbled back onto the turf in the third quarter to lead the Packers to a miraculous 24-23 win. By the time he threw the game-winning touchdown pass to Randall Cobb with just two minutes and 13 seconds left on the clock, NBC's audience had jumped back up to 23.4 million viewers.

As NBC's Al Michaels exclaimed at the end of the game, nobody would've blamed you for bailing out on Sunday night's contest long before Rodgers pulled his Willis Reed act. "Look, if you went to bed at halftime, it's 17-nothing," Michaels said. "You're thinking Green Bay looks terrible, Chicago looks great. Rodgers is done for the night, maybe longer. Then you wake up in the morning and go, 'What the hell?'"

If NBC's primetime broadcast couldn't top its year-ago deliveries, the Sunday afternoon windows suggest that many football fans may have filled up on CBS and Fox's regional coverage. CBS put up its highest numbers for an opening single-header window in 20 years, averaging 17.1 million viewers and a 9.7 rating with its 1 p.m. slate. All told, CBS's five-game 1 p.m. EDT roster improved on its year-ago deliveries by 29 percent. Fox's regional window was up 12 percent year-over-year (12.5 million viewers, 7.4 household rating).

As much as Sunday's stronger ratings performance was a boon to NFL advertisers like Geico, Pizza Hut, Chevrolet, DirecTV, Buffalo Wild Wings and State Farm, it's worth noting that a single day of gains doesn't tell us much (if anything) about how the season as a whole will shake out. Nor do Sunday's numbers represent a return to the NFL's prelapsarian years, when the ratings were all but impervious to the forces that have made mincemeat of broadcast's entertainment programming.

For example, this year's deliveries were down 9 percent compared to the four-window average (20.6 million viewers/11.8 rating) for Week 1 of the 2016 season, and were off another 13 percent versus the analogous 2015 numbers (21.3 million/12.5). But after a week that saw the president reenergize his longstanding feud with the NFL because Nike featured a former player—and active political lightning rod—in its new advertising campaign, any return to normalcy for TV's last great source of GRPs is a welcome development.