It's not business as normal anymore at Mini Cooper.

The tiny car has been showing outsize growth for the last few years, but now competition has started to ding the brand as rivals like Chevy introduce a widening array of small, fuel-efficient cars. 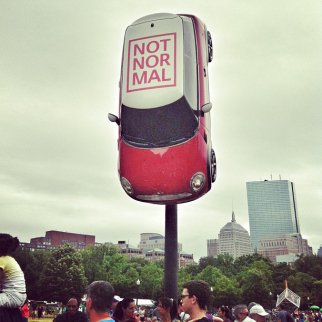 Mini is fighting back with new executions in its "Not normal" campaign from Butler Shine, Stern & Partners, Sausalito, Calif. -- the creative strategy that allowed the agency to hold onto the account after the automaker's review in 2012. The idea is to push its peculiarity and stand out from brands like Chevrolet's Spark, which outsold Mini in July of this year according to Automotive News' DataCenter.

Tom Salkowsky, Mini's marketing chief, said it's a continuation of the brand's long-time strategy of turning left while the rest of the auto companies turn right. "We're a feisty, small brand. We're a featherweight in the ring with heavyweights. We have to stick and move," he said.

"We're still telling a story. But we're using everything in our toolbox to do that. It keeps it interesting," said John Butler, principal at Butler Shine.

The Mini way
The younger, offbeat car buyers Mini targets don't like traditional advertising. So Mini has always relied on clever stunts and event marketing, inviting fans to experience its brands at events where they feel comfortable and via social media.

"You won't find us a lot on TV," said Mr. Salkowsky, because experiential and non-traditional marketing is "really the Mini way."

It's also a lot less expensive. The small, independent brand under the BMW Group umbrella spent less than $20 million on traditional media in 2012, according to Kantar Media. That's a pittance compared to the budget of competitors, such as Fiat, which spent nearly $80 million in 2012.

The "Not normal" push started this year includes a series of lampposts with replica Mini's hung upside down from the top. The signs on the roofs read: "Not Normal." The automaker put up one Mini lamppost (with the headlights serving as working streetlights) at the annual South by Southwest music, tech and interactive conference in Austin, Texas. Mini has put up a similar lamppost in Boston and plans to build another in Hollywood. "People were taking pictures; sharing it. That was the whole plan. To seed 'Not Normal' in a very non-traditional way," said Mr. Salkowsky.

Mini owners
It's also running road rallies. In August, Mini invited customers (in Mini-speak, "motorists") to try to break the Guinness World Record for the biggest-ever parade of Mini vehicles with a mass-crossing of Michigan's 500-foot high, 26,372-foot long Mackinac Bridge. The "Mini on the Mack" event didn't break the record. But it still spurred 1,700 people driving 848 Mini's from as far away as California, Texas and Florida to participate. 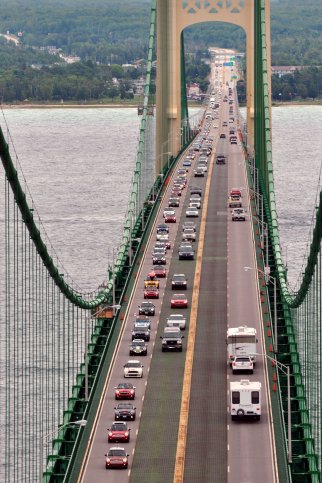 There was an owner from San Francisco who drove 2,300 miles, one way, to get there. So what would make somebody drive 4,600 miles to drive across a bridge?" asks Mr. Salkowsky. "Is that normal? No. They love being around one another. They love the community of Mini, meeting other owners, seeing their Mini's and hearing their stories about how they personalize their Minis."

Storytellers
A few years ago, Butler, Shine came up with the idea of Mini publicly challenging Porsche to a race. The "Mini vs. Porsche" marketing challenge took on a life of its own, with Mini running front-page ads and even hiring an airplane to fly a banner over the company's headquarters inviting them to race. Porsche eventually accepted and unsurprisingly crushed Mini in the race. But the stunt got plenty of media attention and helped carve out Mini's underdog persona.

Mini came to the U.S. in 2002 with only one model: the Mini Cooper Hardtop. Since then, it's grown to seven different models (including the bigger 4-door Countryman with all-wheel drive) and 119 dealers in 38 U.S. states. U.S. sales are larger now that in the U.K.

But lately its share has been slipping in the sub-compact segment. Over the first seven months of 2013, the Mini hardtop accounted for 32.4% of the segment, according to Automotive News DataCenter. Right behind it was Fiat, which held a 30.3% share for its Fiat 500. Coming up fast is the Chevy Spark, which holds a 27.2% slice of the segment. The Spark outsold both Mini and Fiat in July, with 3,847 cars sold vs. 3,739 for Mini and 2,821 for Fiat.

The majority of BMW's corporate office is sleek, white and modern with a Euro-chic design feel. Then there's the cluttered, messier section upstairs housing Mini's 30- to 40- person team.

A traditional red British telephone booth offers a color pop as you enter the section where Mini's black brand color dominates. Executives like to have meetings and screen commercials in the darkly-colored "Mini Bar."

What's even less normal for Mini: The compact car maker's total ad budget should rise about 25% in 2013, said Mr. Salkowsky, and some of it may go to TV. "If you come back in a year, you may find us very surgically going into a big channel like TV."

~ ~ ~
CORRECTION: An earlier version of this story said the Mini Cooper S accounted for 32.4% of sub-compact sales in the first seven months of this year. That is actually the figure for Mini hardtops.