Friday Wake-Up Call: Facebook Tests a 'Downvote' Button, and Google Gets Slapped With a Fine 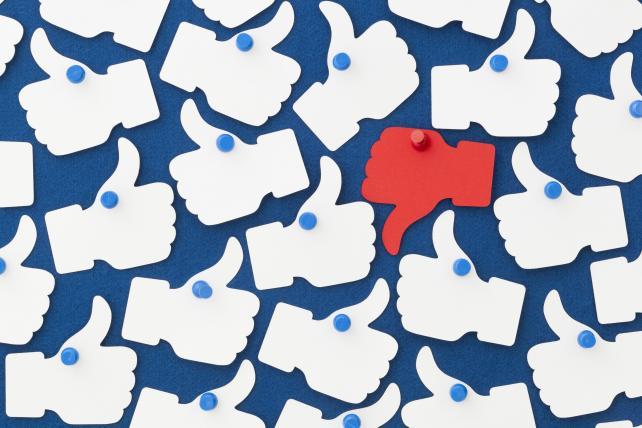 What people are talking about today: A few weeks ago, Coca-Cola debuted its millennial-friendly redesign of Diet Coke along with new fruit flavors, and some people said the branding reminded them of LaCroix. Now PepsiCo's having its own LaCroix envy. The company has a new brand of flavored sparkling waters called Bubly, which are getting two 30-second slots at the Academy Awards on ABC next month, as Ad Age's E.J. Schultz writes.

While LaCroix gets an ironic jolt of cool from its kitschy branding (its packaging art was once described as "the love child of Monet and Grandma Moses"), Bubly seems to be trying really hard to please millennials. Schultz writes,

"Bubly is packaged in bright colors with cans featuring whimsical messages etched on the pull-tab, such as 'Hey u,' 'hiii,' and 'yo.' Other text on the cans include sayings such as 'I feel like I can be open around u,' 'hold cans with me,' and 'love at first phssst.'"

Um, we're have so many feels.

Pushing buttons
Facebook doesn't want to be a place for negative vibes; there's a "like" button but no "dislike" button, despite popular demand. But now Facebook is testing a new button – a "downvote" button -- that "appears to give users the ability to downrank certain comments," as The Daily Beast reports. The Daily Beast likened it to the "dislike" button of users' fantasies, but Facebook apparently wasn't cool with that comparison and insisted that "we are not testing a dislike button." The downvote button appears on comments on public page posts and "is running for a small set of people in the U.S. only," Facebook told The Daily Beast. OK, we get the message: This is only a test. But still, it's interesting. Facebook is famous for copying Snapchat features, and this new move is very Reddit-esque.

Slap
India's antitrust watchdog ordered Google to pay a $21 million fine in India for having "abused its dominant position in online general web search and web search advertising services in India." That's 5 percent of Google's revenue in India, as Quartz writes. The Competition Commission of India narrowed in on Google's flight search box, where advertisers can pay to appear. Quartz says:

The CCI found that the "disproportionate real-estate" given to the flight unit unfairly pushed down or pushed out other travel sites in India that rely on search engines to reach travellers.

A lot of attention has been given to European anti-trust efforts against U.S. tech giants, with reason; last year the European Commission ordered Google to pay a whopping $2.7 billion fine. This is a little slap on the wrist by comparison, but it's a reminder that regulators in other markets are looking at Google too.

Just briefly:
Opening ceremony: The 2018 Winter Olympics opening ceremony happens today at 6 a.m. EST. In the U.S., you can livestream it on the NBC app or on NBCOlympics.com. Or if that's too early for you, you can watch it on TV at 8 p.m. EST. NBC says the event is generating upwards of $900 million in national ad sales.

Time to make the coffee: Dunkin' Donuts says it needs stronger marketing of its coffee. As Ad Age's Jessica Wohl writes, the CMO says "we took our coffee message for granted."

Not exactly failing: The New York Times says it made over $1 billion from subscriptions in 2017. As Ad Age's Simon Dumenco writes, "President Trump is spectacularly wrong about the 'failing New York Times,' as he likes to call it—but the paper remains too polite to say so."

Doh: CNN reports that "Twitter left hundreds of Russian propaganda videos, with millions of views, on its video platform Vine for months after it should have known they were posted by a Kremlin-linked troll group."

Streaming: Viacom Inc. says it will launch an ad-supported video streaming service by September, The Wall Street Journal reports. Content will come from MTV, Comedy Central and its other cable channels.

Super bowl followup: Which Super Bowl ad had the biggest impact on a brand's social media following after the game? The winner is Lexus, according to data from ListenFirst Media. Read more on Ad Age.

Kevin Hart: Kevin Hart talks to Ad Age's Garett Sloane about his digital video network, Laugh Out Loud -- and about his antics at the Super Bowl, when he tried to get onstage at the trophy presentation. Basically, he's a huge Eagles fan. "The city of Philadelphia is what I bleed," he says.

Creativity pick of the day: People love to hate pre-roll ads, but Geico and the Martin Agency continue keep having fun with them. In the latest campaign, Geico mocks interruptive advertising by interrupting its own ads in random ways – at one point, a Geico logo crashes into a couple's bedroom. Read more by Alexandra Jardine, and watch here.