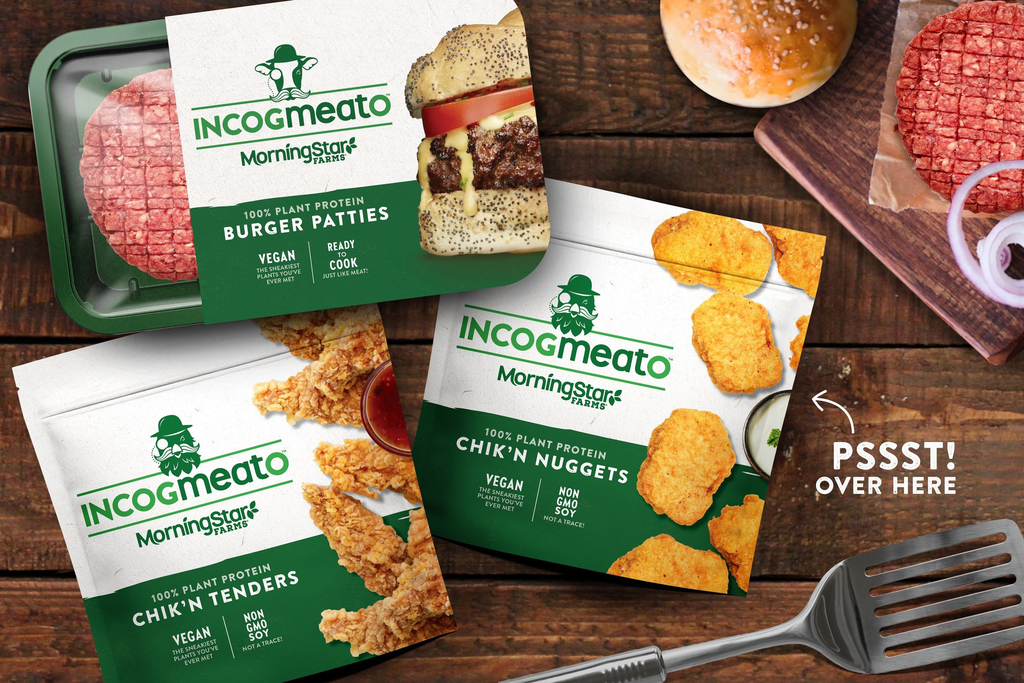 Kellogg goes ‘Incogmeato’
Is it possible for a brand name to be so cheesy, so absolutely absurd, that it’s actually brilliant? Kellogg Co.’s MorningStar Farms revealed that its new plant-based faux meat line is named “Incogmeato,” and corners of Twitter erupted in giggles. “Confirm that this is not The Onion?" someone tweeted. In Ad Age’s internal Slack messaging channels, staffer and pun enthusiast Max Sternlicht riffed on similar spycraft-themed names for vegan burgers disguised as meat. He suggested “Incowgnito,” “Steakout,” “Grassified” and a few others we won't subject you to.

However you feel about the name Incogmeato—and some people definitely hate it—you have to admit it’s memorable. It’s a giant dad joke of a product name. Kellogg is late to the trend of plant-based meat imitators, as Bloomberg News writes, but suddenly more established brand names (Beyond Meat, Impossible Foods) seem bland. Thanks for the laugh, Kellogg.

YouTube’s settlement
Google’s YouTube agreed to pay a $170 million fine after facing a probe by the Federal Trade Commission over how it treats children’s privacy online. It also has to make some changes to its vast ad business. As Ad Age’s Garett Sloane writes, YouTube:

“will no longer use data to target ads on any videos directed at children, even if the viewers are adults. Also, YouTube creators are about to get vetted to make sure they comply with federal children’s privacy rules.”

Sloane also has answers to some other questions you might have. Such as, are YouTube’s critics satisfied? Short answer: No, partly because the fine was small compared to how much money Google makes (more than $136 billion in revenue last year.)

Agency buzz
Havas Group just scooped up one of Europe’s strongest indie creative shops. Havas, which is part of French mass-media conglomerate Vivendi, is taking a 51 percent stake in Paris-based Buzzman, which has 140 staffers and clients including Burger King, Ikea, Mondelēz International and Huawei. The shop, founded 13 years ago by George Mohammed-Chérif, has had some memorable campaigns over the years, especially for Burger King. One holiday season, Buzzman made super-ugly Burger King-themed Christmas sweaters. And who could forget the time Buzzman made Whopper-flavored toothpaste?

Just briefly:
Oprah 2020: A lot of people once hoped to see an “Oprah 2020” presidential campaign. Things worked out differently, and now “Oprah’s 2020 Vision: Your Life in Focus” is the name of Oprah Winfrey’s national tour presented by WW, formerly known as Weight Watchers. Read more in the Ad Age Marketer’s Brief.

Headline of the day: “LeBron James, a Fan of Tacos, Seeks to Trademark ‘Taco Tuesday,’” from The New York Times.

Creativity pick of the day: If you’re holding your ketchup bottle upside down and shaking it, you’re pouring it wrong. Ad Age's Alexandra Jardine writes that Heinz Canada came up with “a clever packaging idea: it's positioning the label to be upright only at the exact angle for optimum pouring." The label looks off-kilter, and anybody who walks by the ketchup shelf will probably be tempted to investigate the weirdness.