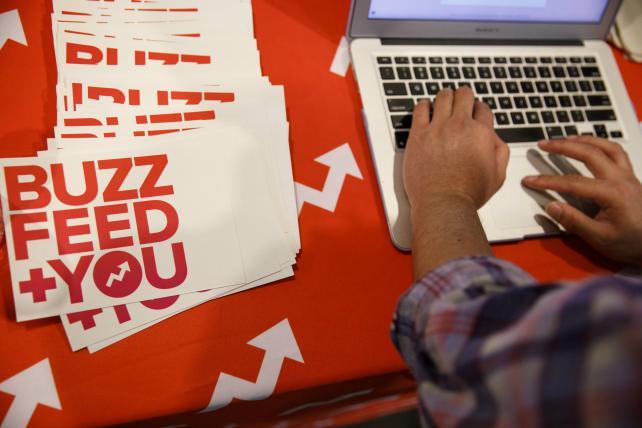 A contact form for jobs with Buzzfeed at a career fair in Los Angeles.
Credit: Patrick T. Fallon/Bloomberg

Welcome to Ad Age's Wake-Up Call, our daily roundup of advertising, marketing, media and digital news. You can get an audio version of this briefing on your Alexa device. Search for "Ad Age" under "Skills" in the Alexa app. What people are talking about today: BuzzFeed, the for-profit, venture capital-backed digital media company, will ask readers for donations to fund its news reporting. "Can you spare a dime for BuzzFeed?" Fast Company asks. The Wall Street Journal, which reported the story first, says BuzzFeed News will "unveil a feature at the bottom of its news pages that allows readers to donate between $5 and $100. The donation feature asks readers to 'help us report to you' and calls upon them to join a community that will shape the future of BuzzFeed News." Content will remain free. These are tough times for publishers, with Google and Facebook vacuuming up most of the digital ad revenue. BuzzFeed reportedly missed its revenue target last year and has been trying new money-making tactics; a year ago, it embraced programmatic ads, including banner ads, which was a change of heart from a company the VP of which reportedly once said people are "more likely to summit Mount Everest than click on a banner ad."
The precedent: The Guardian asks for reader donations and raised $130 million from reader revenues from April 2016 to March 2017, The Journal notes. The UK's Guardian "is owned by a trust that returns all profits to the news organization," Columbia Journalism Review has noted. BuzzFeed, meanwhile, is for-profit.
The tweet: "I think BuzzFeed News is a wonderful thing and I want it to succeed. But I suspect a donation pitch will be hard for a for-profit company valued at $1.7 billion to pull off," tweeted Joshua Benton, director of the Nieman Journalism Lab at Harvard University. Maybe. But playing devil's advocate, do average readers give much thought to the corporate structures underpinning their news outlets? Maybe believing in the mission will inspire people to open their wallets? (Imagine that.)

From video games to football games
The National Football League is getting a new chief marketing officer, a tough role that requires tackling the problem of falling ratings, and fielding President Trump's attacks on the league and players who protest social injustice during the national anthem. Tim Ellis is taking the job, writes Ad Age's E.J. Schultz, after serving for seven years as chief marketing officer at video-game maker Activision, which is behind "Call of Duty." He replaces Dawn Hudson, who resigned.
Worth noting: The NFL accounted for 37 of the year's top 50 broadcasts last season, says Schultz. But with ratings suffering across the board on traditional TV, "it lost 9 percent of its TV audience last season from the year prior."

A Blockbuster brew
As of last month, just one Blockbuster Video remains in the U.S., in Bend, Oregon, a fact that received a bit of press, including here at Ad Age. Capitalizing on its new fame, according to multiple reports, it has collaborated with a craft brewer called 10 Barrel Brewing to make a beer, which Business Insider says will be "at all six 10 Barrel pub locations, including the two in Bend, for a limited time." Called The Last Blockbuster, the branding evokes the video chain's blue-and-yellow logo. Beer Street Journal reports that the beer has nuances of red licorice. Overall it's a cute idea for these nostalgia-soaked times. But something's a little off: Back in Blockbuster's heyday, craft beer wasn't a big thing yet. Booze brands that were big in the '90s are missing out on a co-branding opportunity here. Hello Zima, are you there?

Facebook's Myanmar problem
Facebook banned several Myanmar military officials from the platform, and it's the first time the company has barred a country's military or political leaders, Reuters reports. The social network says it took action after a U.N. probe found evidence that individuals and groups had "committed or enabled serious human rights abuses in the country. And we want to prevent them from using our service to further inflame ethnic and religious tensions."
'Blackout': "Facebook's action means an essential blackout of the military's main channel of public communication, with pages followed by millions of people no longer available to a population that sees the social media app as virtually synonymous with the internet," Reuters writes.
The quote: "Facebook has been a useful instrument for those seeking to spread hate," says a United Nations report on Myanmar. "Although improved in recent months, Facebook's response has been slow and ineffective." (Facebook's post also says it was too slow to act, but that it's making progress now.) It also urges that "the extent to which Facebook posts and messages have led to real-world discrimination and violence must be independently and thoroughly examined. The Mission regrets that Facebook is unable to provide country-specific data about the spread of hate speech on its platform, which is imperative to assess the adequacy of its response."

Juuling: The New York Times delves into the campaigns of popular e-cigarette brand Juul, which "are at the heart of a federal investigation into whether the company intentionally marketed its devices to youth."

'Digital well-being': YouTube will let us know exactly how much time we spend on the service. "When users open their account menu, they'll now see an updated profile that shows the amount of time they've viewed videos that day, the previous day, and over the last week," The Verge writes. The Google-owned platform calls these more "tools to take charge of your digital well-being."

Moving on: Another top Facebook exec is departing the company. "Rachel Whetstone is leaving the top corporate communications job at Facebook and will take one running public relations for Netflix," Recode reports.

Creativity pick of the day: Before she was a great athlete, Serena Williams was a talented girl on a tennis court, training with her dad and dreaming of a big win. As Ad Age's I-Hsien Sherwood writes, a new Nike spot from Wieden & Kennedy blends archival footage of Williams as a child with scenes of her on the court today. And there's a touching voiceover from her dad: "Be tough, just like you want to win. Just like you're at the U.S. Open." Watch it here.