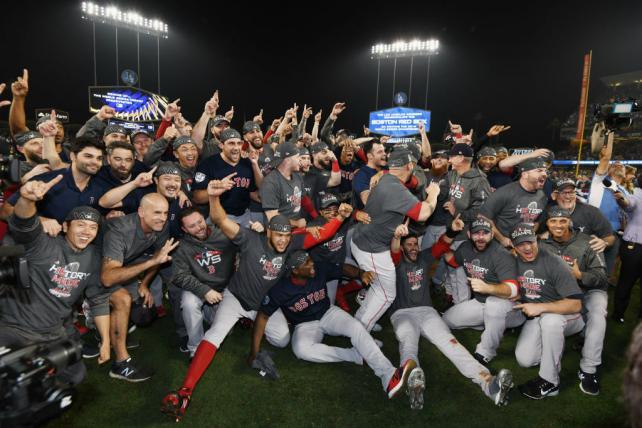 What people are talking about today: The Boston Red Sox are World Series champs – again. Boston beat the Los Angeles Dodgers 5-1 Sunday in Game 5, scoring a fourth World Series victory in 15 years. For what it's worth, there was a lot of social media griping about Fox Sports running brief ads on part of the screen while the game continued. The tactic isn't new anymore, but many viewers still find it jarring. Kristin Lemkau, CMO of JPMorgan Chase (and Red Sox fan), weighed in last week on Twitter: "Dear @FOXSports - As both a fan and an advertiser, I very much dislike these in-game ads." Another complaint Sunday: "These mid-inning ads during an at bat violate the essential drama of baseball." And here's an all-caps POV: "BOOO IN GAME ADS IN THE 9TH INNING OF A WORLD SERIES GAME. BOOOOOOO."

The abridged version
If you missed the Association of National Advertisers' big annual conference in Orlando, check out Ad Age's five takeaways from the "Masters of Marketing" conference, which ended Saturday. There was talk about the FBI's probe into agencies' media-buying practices -- "a very serious investigation," as ANA's general counsel told attendees, warning that agencies could risk fraud charges. Meanwhile, marketers spent a lot of time promoting their in-house shops, as E.J. Schultz, Adrianne Pasquarelli and Jack Neff write. For example, they write, Hershey CMO Jill Baskin

"touted the candy marketer's in-house content studio that launched five months ago. By shooting some ads in-house, Hershey pumps out content more quickly, she said. 'I am here to tell you anyone can do this,' she said." For agencies, the buzz about in-house shops is an uncomfortable development.

Also: Investment banker Terry Kawaja of Luma Partners talked to Ad Age Editor Brian Braiker about "one of the the biggest changes going on in marketing" -- the trend of direct-to-consumer brands, famous examples of which include Airbnb and Dollar Shave Club. Watch their conversation here.

Good tidings
It's a bit early for holiday ads – it's not even Halloween yet. But if you're in need of some goodwill and holiday spirit, check out Ikea's new U.S. ad from Ogilvy New York and Sweetshop. As Ad Age's Adrianne Pasquarelli writes, the brand's warm, cozy spot celebrates families that are diverse in terms of religion, ethnicity and age. "Our holidays don't all look the same—maybe that's what makes us great," the voiceover says. In 2018, in America, that doesn't seem like a throwaway line.

Gab
What is the Gab social media platform? Robert Bowers, suspected of killing 11 people and wounding six in a shooting at a Pittsburgh synagogue this weekend, had reportedly posted anti-Semitic messages there. The Washington Post says Gab has become a "haven for white supremacists, neo-Nazis and other adherents to extreme ideologies that have found themselves increasingly unwelcome on Twitter and Facebook." Gab, which describes itself as "an ad-free social network for creators who believe in free speech," has condemned the shooting. Late Sunday, the platform was inaccessible; a message from Gab says it is transitioning to a new hosting provider. "We have been systematically no-platformed by App Stores, multiple hosting providers, and several payment processors," the message says.
Something to know: Gab founder Andrew Torba also co-founded digital advertising startup Kuhcoon, later known as Automate Ads. It was bought last year by competitor AdHawk. According to a TechCrunch story at the time, AdHawk was interested in Automate Ads' technology but didn't bring anybody from the company on board.
In other social media news: Cesar Altieri Sayoc, suspected of mailing bombs to prominent Democrats, also has a social media history that's under scrutiny now. The Wall Street Journal says he allegedly "sent threatening messages on Twitter to a political analyst. She reported the tweet to the company, which left the message up—a decision it apologized for this weekend."

Question mark: It's unclear at this point who will step in for Megyn Kelly on NBC this morning after her slot on "Today" was cancelled. "NBC News won't say who will be filling in on Monday," CNN's Reliable Sources newsletter says.

Hitting pause: California's strict new net neutrality law is temporarily on hold. CNN.com reports: "The state's attorney general has agreed not to enforce its new law — aimed at preventing internet providers from favoring certain websites and apps — while a lawsuit plays out in Washington."

Ad of the day: Shoe startup Allbirds has a quirky new campaign from Anomaly Los Angeles. As Ad Age's Adrianne Pasquarelli writes, one ad is about a man with a strange, overpowering compulsion to "meet the sheep whose wool went into his shoes." Yes, it's quite unusual -- watch it here.