The inauguration sparks powerful ideas, dads get shamed, and more
READ THIS NEXT
The top 5 creative campaigns you need to know about right now

Ad Age's Creativity Editor Ann-Christine Diaz and Associate Editors Alexandra Jardine and I-Hsien Sherwood and Reporter Jessica Wohl count down the week's best ideas, including a campaign that turns to dad shaming, a new take on corporate giving, plus reactions to the change in the White House.

Mailchimp’s platform has long been about helping small businesses and has now officially extended that thinking into its philanthropic efforts, with a broad initiative designed to empower small nonprofits to make the most of corporate support. While big companies often go down the familiar path of contributing to established organizations, smaller nonprofits have very specific needs in order to grow. Through non-restricted funds, real-time advocacy and innovative social programs, Mailchimp’s “Big Change Starts Small,” conceived alongside agency Kin, aims to empower those who know their communities best to be as effective as they can be. The platform is actually a crystallization of Mailchimp’s corporate responsibility efforts over the last seven years, during which it has helped a number of local organizations flourish in its hometown of Atlanta. It's also a call to action to larger companies to rethink their own approach to CSR.

Kids and parents switch roles in a new campaign from oat milk brand Oatly. The effort hinges on fascinating insight that middle-aged men are the group most resistant to adopting a plant-based lifestyle. So, the new spots depict dads as clueless ones who prefer the stuff from cows, while their plant-preferring kids look on, shaking their heads. One ad, for example, shows a teen catching his father in the act of sneaking cow’s milk into the fridge, while another sees a daughter seriously reprimanding her dad when he requests milk from the store—it's almost as if he asked her to pick up a pack of cigarettes. Tom Speers directed the ads, via Smuggler.

3. The Lincoln Project: Morning in America

On Inauguration Day, The Lincoln Project debuted a new ad, “Morning in America,” just as Joe Biden stepped up to podium to become the 46th president of the United States. The spot is a nod to the famous political ad from 1984 by Hal Riney, which highlighted the success of the country under the Reagan administration. The new film, however, acknowledges the realities of U.S.A. in 2021, with an economy in crisis, reeling from the insurrection and still battling coronavirus. Yet under the Biden administration, the country now has hope. The spot comes full circle from the conservative PAC’s ad from May, “Mourning in America,” which contrasted the dismal state of the U.S. under Trump with the halcyon days of the Reagan era.

Over the last four years, Time Magazine turned to illustrator Tim O’Brien to capture Donald Trump in the Oval Office—and the chaos that defined his presidency. One image saw him sitting calmly at his desk, tie and hair flying, wind and rain swirling about, with the line “Nothing to See Here,” teasing a Feb. 2017 story about the disorder in the White House. As the turmoil continued, Time ran two more increasingly disastrous versions of the scene—Trump sitting in rising flood waters, Trump treading above his desk in those waters. And now, with a new POTUS, O’Brien revisits the grand room. This time, President Joe Biden is there, looking out the window as if to survey the country around him, while the detritus of his predecessor remains. The cover line reads, “Day One.” 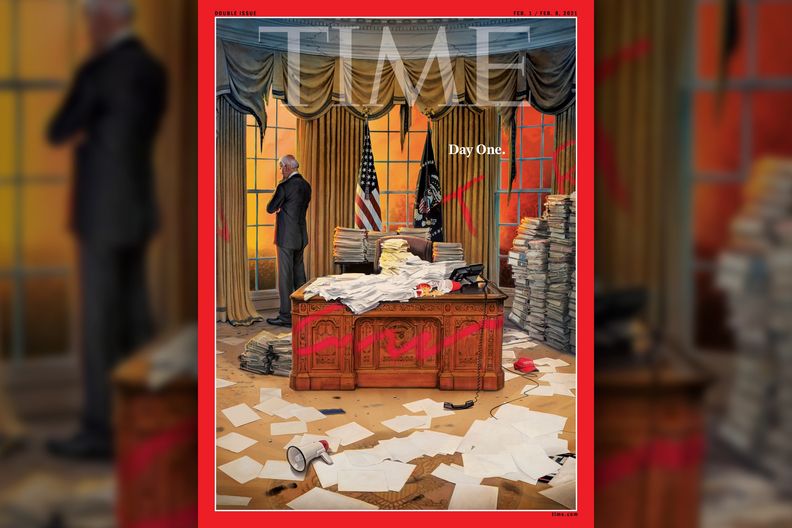 Kamala Harris made history on Wednesday when she became the first female, Black and Asian-American vice president. The moment was not lost on women and girls around the country, and their real-time reactions were captured in this film from the United Nations’ Girl Up, Refinery29 and Ogilvy. A volunteer network of directors and cinematographers traveled to more than 30 households around the U.S. to film the spot's real-world stars watching as Harris took her oath of office. Director Giovanni Messner then edited footage together within hours of the inauguration to create the final piece, which ends with the line, “When one girl rises, all girls rise."