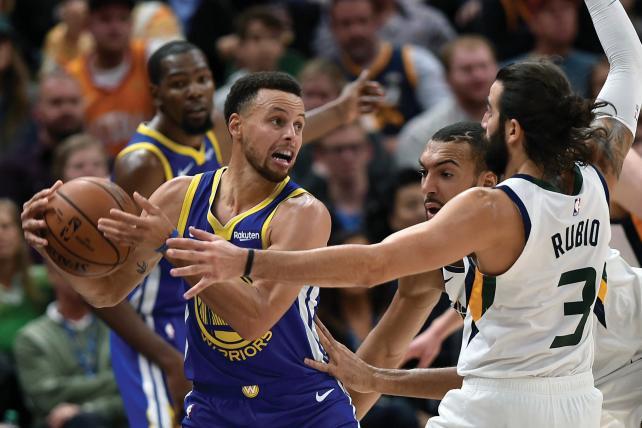 The Golden State Warriors' Stephen Curry fights off Ricky Rubio and Rudy Gobert of the Utah Jazz in an NBA game in October.
Credit: Getty Images

While there's no such thing as a perfect NBA game—perhaps as close as any player has ever come was when Wilt Chamberlain scored 100 points against the Knicks way back in 1962, and even then the Philadelphia Warriors' center still managed to miss 27 shots and four free throws—the league as a whole is now on conversational terms with flawlessness.

According to Nielsen, the 2017-18 NBA regular season averaged 1.89 million viewers across ESPN, ABC and TNT, which marked an 8 percent increase versus the previous season. And while other major American sports leagues (and pretty much everything else that depends on TV as its primary distribution) continue to struggle to retain the increasingly elusive younger demos, NBA ratings last season actually improved 14 percent among the 18-to-34 set and jumped 15 percent with adults 18-to-49.

The ratings momentum is a function of the NBA's virtual monopoly on the imagination of young America. With a relatively apple-cheeked median age of 42, the league's fan base has only aged two years since 2000. By comparison, the median age of MLB viewers is now 57, while the NFL audience is an even 50. And the NBA's winning streak isn't limited to the fans watching at home or in the bar. Attendance for regular-season games last season increased for the fourth straight year to 22.1 million, and NBA venues combined for a record 741 sellouts.

Its social media strategy leaves rival sports leagues in the digital dust; with 32.3 million Instagram followers, the NBA's reach on the platform nearly doubles that of the NFL and MLB combined, and its Reddit page boasts a similar advantage. The Twitter race is much closer: With 27.4 million followers, the NBA enjoys a 3.2 million lead over the NFL.

For all the eye-popping stats in the box score, the NBA's outsized influence over young consumers transcends the machinations of marketing­­—and that isn't likely to change despite the announcement last week that the league's chief marketing officer, Pam El, is retiring. "It's not so much that the NBA influences pop culture—the NBA is pop culture," says The Atlantic's Jemele Hill.

NBA superstars like LeBron James and Stephen Curry not only use social media to galvanize their personal brands but also as a soapbox from which to discuss greater political and societal issues. The NBA actively encourages its players and coaches to speak out on everything from the Black Lives Matter movement to the current inhabitant of the White House. In the midst of the 2018 NBA Finals, James told reporters, "No matter who wins this series, no one wants an invite [to 1600 Pennsylvania Ave.] anyway." That statement speaks volumes about how fans and front-office executives encourage players to buck the prevailing "stick to sports" ethos. (Meanwhile, the NFL's seeming capitulation to President Trump's outrage over players kneeling during the national anthem only widened the divide between fans on either side of the issue.)

Of course, "progressive" carries several shades of meaning. The NBA has been the most forward-thinking league in terms of capitalizing on the inevitable shifts in sports culture and the dictates of the law. After rolling out a sponsored-uniforms initiative that sidesteps the intrusive vulgarity that typifies international soccer kits and race car design, the NBA earlier this year became the first major U.S. sports league to ink a deal linking it with an official betting partner (MGM Resorts International).

Perhaps only the thudding monotony of yet another Golden State title run might upend the NBA's apple cart, and the unstable chemistry between stars Draymond Green and Kevin Durant may very well put an end to the Warriors' hegemony. And while hoops fans in the Bay Area may bemoan the end of Golden State's remorseless reign over the country's fastest-growing league, for the rest of us who are eager to see another team hoist the Larry O'Brien Championship trophy in June, the accession of a new NBA power will only be sweetened by the schadenfreude that will come when—or, let's be clear, if—the Warriors are finally knocked off their perch.