Today in New York City's Bryant Park, 9-to-5ers, tourists and other passersby might notice that the magazines at the newsstand on the corner of 42nd Street and 6th Avenue look a bit different. Instead of Time, The Economist, The New York Times, The Wall Street Journal and People, they'll see titles like The Informationalist, The Manhattan Daily, Hussle and The Weekly Journal. 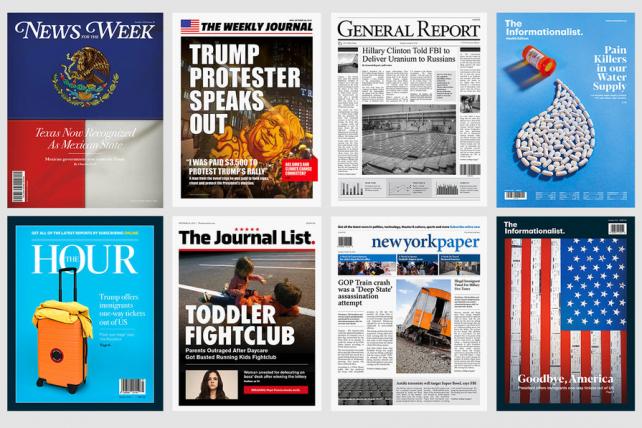 All the headlines are pulled straight from the annals of the internet-- unsubstantiated, false stories that saw plenty of traction in the real world. They're all part of "The Fake News Stand," an activation created by TBWA/Chiat/Day New York for the Columbia Journalism Review that, ahead of the mid-term elections, seeks to call attention to the dangers of the misinformation we encounter in the media. 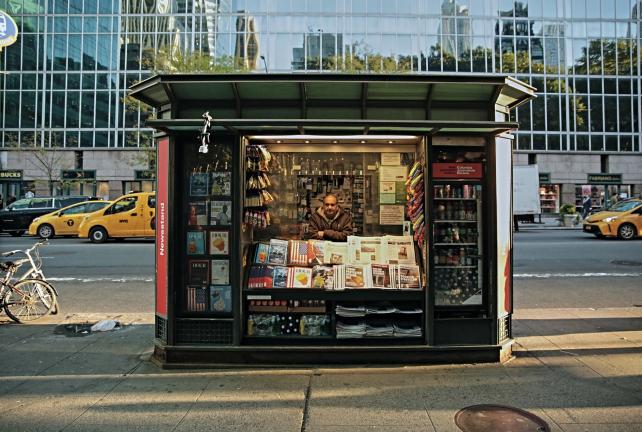 Open until 2 p.m. ET Tuesday, it's a real-world sequel to CJR and TBWA's "Real Journalism Matters" print campaign that featured black-and-white photographs of people reading what appeared to be traditional daily newspapers, but which instead had nameplates that represented a host of unreliable sources, like "Dad's Facebook Posts," "Retweets from Strangers," and "Some Guy's Blog." 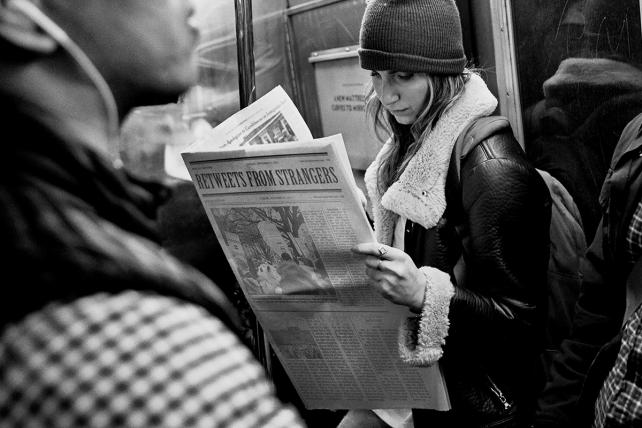 According to TBWA/Chiat/Day New York Chief Creative Officer Chris Beresford-Hill, the newsstand idea "took two minutes to come up with, but the execution took weeks to months. It felt like a natural extension--taking what people widely consider fake news offline was powerful--but how do we scale that and make it a bigger deal, with the midterms approaching?"

The magazines on "The Fake News Stand" won't offer a deeper dive into the teasers on the covers. Rather, readers will find a guide from CJR that helps them identify "misinformation" in their media diet:

"Every headline and story you see … appeared somewhere on the Internet, was heavily promoted on social media, was among the most-read stories when it appear, and is not true … There's a difference between misinformation and information we don't like. It's important not to dismiss legitimate facts as 'fake' simply because we want them to be false." 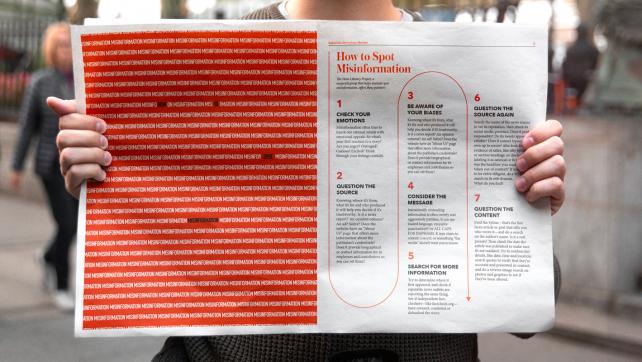 Columbia Journalism Review is a non-profit outlet published by the Columbia University Journalism School that offers press criticism, analysis and news on industry trends, targeting primarily professional journalists. Until this year, the magazine had done little in the way of creative advertising, but as the press itself has become the focus of media attention, the time felt right for CJR to step out.

"I don't think Columbia Journalism Review would have considered doing something like this a few years ago, but with the election of Trump and the intense focus on the media--how the media covers him, and how he responds to the media--that's thrown all these issues we've long covered into the spotlight," says Kyle Pope, editor in chief and publisher of CJR.

Under the current administration, Pope says that CJR's reach has expanded vastly, and beyond its target audience of journalism professionals. "Our audience has grown about 50 percent a year since the arrival of Trump," he says. "There's a lot of people who wouldn't be traditional CJR readers who now care about where news comes from, how it flows through Facebook feeds, and how Trump responds." And while the CJR doesn't have hard data, "we can tell anecdotally that there's more of a general consumer readership."

As a non-profit, CJR receives funding from donors and likens its model to NPR --"You don't have to pay, but if you believe in what we do," Pope says. "if you want to feel you're part of this tribe, then you pay."

As for the campaign's goal, Pope says, "The thing that drives us, is the question of relevance--are we relevant in the conversation and do people talk about CJR? Are we seen as smart, thoughtful and relevant?"

"Because it's an election year, there's no time to hold back," says Beresford-Hill. "We're looking at this as an activation designed for amplification through coverage." The hope is that the news stand, via that coverage, will "travel around the world a few times and make an important point when every American has an important decision to make in less than a couple weeks."