A Brief History of Political Candidates and Video Games

Hillary Clinton's campaign has invited Pokémon Go-crazed swing-staters in Ohio to register as voters while grabbing PokéBalls at an official event on Saturday.

"Join us as we go to the Pokestop in Madison Park and put up a lure module, get free pokemon, & battle each other while you register voters and learn more about Sec. Hillary Clinton!!!" declared the campaign in a promo for the event in Lakewood.

Yes, the former Secretary of State appears to be the first political candidate to jump on the Pokémon bandwagon.

It took little time for the Donald Trump campaign to play up the Pokémon phenomenon. On Thursday the campaign posted a short video-clip parody of the game featuring Ms. Clinton as a character named "Crooked Hillary" being captured. There's no word yet on a Trump PokéStop.

If you thought the embrace of Pokémon Go by Hillary Clinton is gimmicky, you're probably right, but it's not exactly original. In fact, political candidates have experimented with digital games and virtual reality for at least a decade. 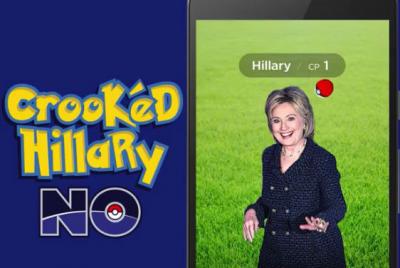 A Pokemon parody posted by Donald Trump's campaign on Facebook this week.

Back in 2006, when much of the handwringing over digital games destroying society was focused on Second Life, former Virginia Governor Mark Warner went virtual. Eyeing a presidential run at the time, Mr. Warner's exploratory PAC Forward Together plunged into the unreal world. The PAC hosted a sparsely-attended Second Life event during which a stately Mark Warner avatar was interviewed by a long-haired character in a white suit named Hamlet Au about issues including education and jobs.

Games seemed to be all the rage in '06. Even 2016 presidential hopeful Bernie Sanders had a digital game back then when running for U.S. Senate in Vermont. Then, as now, big money special interests were the enemy. The game warned players to "Watch out for the Extreme Right Wing, Big Money, Special Interests, Fat Cats, and Mudslingers!!!" And, players relied on an alternative energy source -- hydrogen fuel -- to power up.

And remember 2008? The Obama camp's digital team generated lots of headlines late in the election for running digital billboard ads inside video games including EA racing game Burnout Paradise. The goal was to remind people in early-voting states to, well, vote early.

The Obama campaign must have generated positive results from that effort because it went back to in-game ads to get out the vote in 2012. Republican rival Mitt Romney also ran ads in games that election season, a campaign representative told NPR then, without providing any details.

Whenever political campaigns throw resources or money towards non-traditional platforms, be they games or Snapchat, observers wonder whether there is substance behind the novelty. The fact is when campaigns use new technologies they're bound to generate media coverage based solely on their use of a new technology. That alone could be enough to convince any campaign it's worth the risk.