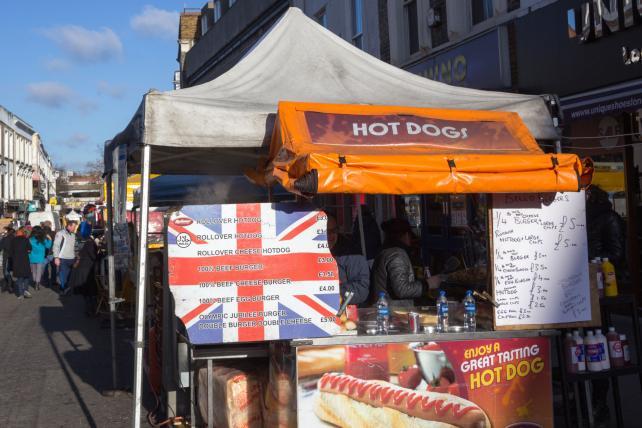 That wonderfully simple snack of a sausage and bun is finally emerging from the shadow of its more-popular culinary cousin in the U.K., where burgers are ubiquitous and hot dogs an occasional treat you might enjoy at a soccer game but rarely crave.

It's been a long time coming in a country famed for pork sausages that never embraced the hot dog in the same way as America, even though Europeans likely created it. The term "wiener" originated in Vienna while "frankfurter" comes from Frankfurt. Immigrants then took their concoctions across the Atlantic, according to the U.S. National Hot Dog and Sausage Council in Washington.

Just as burgers are getting an upmarket makeover, some of the U.K.'s best chefs next week will compete for the title of Britain's best hot dog, hosted by the Bubbledogs restaurant that serves only Champagne and hot dogs (I'll be one of the judges.) But the recent embrace isn't a top-down culinary trend. Demand is growing significantly nationwide, according to Kerry Foods, whose Rollover business is the biggest seller of hot-dogs-to-go in the U.K.

"Our hot-dog business has had double-digit growth this year, and we are predicting the same for next," says Bruce Alexander, Kerry's out-of-home commercial director. "It's a very significant trend." He declined to be specific, but Rollover sells more than 20 million hot dogs a year at more than 2,000 outlets in stadiums, concert venues and stores, according to the Telegraph newspaper.

That double-digit growth contrasts with a 1.4 percent annual increase in British consumption of sausages and 1 percent rise in sausage rolls, according to the Agriculture and Horticulture Development Board.

That frankfurters have struggled in the U.K. has puzzled Mark Rosati, culinary director of Shake Shack, which started as a food cart selling hot dogs in New York's Madison Square Park in 2004. These days, the Shack's burgers are bestsellers, but their ascendancy is more extreme in the U.K., where there is limited demand for the Chicago-style Shack-cago Dog.

"As a New Yorker, I see hot dogs as a big part of our culture, our culinary fabric," he says. "There are guys on every corner selling them. I just don't see hot-dog carts in London and demand for ours depends a lot on the time of year. But Bubbledogs are being really creative with hot dogs and even (British chef) Jamie Oliver has done one. I wouldn't be surprised if their popularity grows."

Much of the growth in London has been from street-food vendors such as Big Apple Hot Dogs, but the biggest single event was probably the opening in 2012 of Bubbledogs. It's garnered a lot of attention, including from Shake Shack founder Danny Meyer. Rosati will be competing on Monday at the Hot Dog Challenge.

Sandia Chang, who co-owns Bubbledogs with her husband James Knappett, sounds a note of caution. She went to high school in Los Angeles and says hot dogs are just not part of British culture.

"Burgers are always the winner," she says. "The hot dog is quite foreign, while Americans eat them all the time. A hot dog is a very hard sell to an English crowd."

He has one on the bar menu at Hawksmoor Spitalfields in East London and says he is looking at introducing the hot dog next year at his Meatopia festival, which brings together chefs from around the world.

"I like hot dogs but a lot of them are rubbish," Turner says. "I put them on the menu after trips to New York. They don't sell as well as burgers, but people who like them really like them. We've never done them at Meatopia before but we like to keep it fresh and different, and hot dogs seem to be in the ascendant."

Jonny Lake, the Canadian head chef at Heston Blumenthal's three-Michelin-Star restaurant the Fat Duck, is another fan. He's put hot dogs on the menu at two other Blumenthal venues: The Crown pub, in Bray, and the Perfectionists' Cafe, at Heathrow Airport. (He's competing at the Bubbledogs event alongside the Crown's chef Matt Larcombe. They won the title last year.)