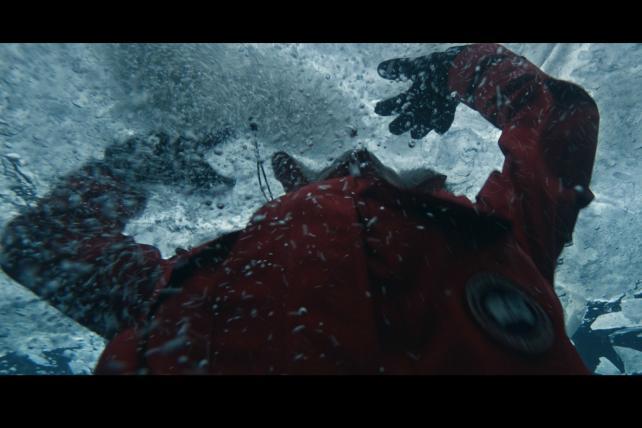 Winter is coming and Canada Goose is ready. The high-end outerwear brand, which has become ubiquitous on the streets of New York and in cities around the world, launched its first global marketing campaign on Tuesday. In an intimate setting at The Explorers Club in Manhattan, the Toronto-based brand showed "Out There," a four-minute film depicting the outdoor explorations of five prominent adventurers who wear Canada Goose coats.

Filmed in New Zealand and directed by Paul Haggis of "Crash" and "Million Dollar Baby" fame, the piece shows a dogsled chased by a polar bear, a plane nearly crashing in the Canadian Arctic, and a woman falling through the frozen tundra in the Arctic Circle -- all are actors portraying events inspired by history. Viewers can watch the film on Canada Goose's website and pause it at any point to hear the actual adventurers tell their story with voiceovers and archival footage.

"We're not a traditional magazine ad campaign-type brand," said Kevin Spreekmeester, CMO for the 58-year-old retailer. "We try to find smarter, more tactful ways to deliver our message." He noted that the campaign is primarily digital with a few out-of-home billboards. In Europe, the film will be shown in unauthorized "guerrilla-type screenings" on the walls of prominent buildings such as a well-known castle through the end of November. Part of the campaign's budget, which was in the single-digit millions, was set aside for fines associated with such broadcasts.

The film marks only the second time that Mr. Haggis, a Canadian, has ventured into the world of commercials. When Canada Goose approached him with the script, he agreed to direct because of his national pride and personal affiliation with the brand. "It's the unofficial coat of film crews," he said. "I've been wearing it myself for 25 years."

Canada Goose worked with Creative Artists Agency, its agency of record, and Huge on the campaign.

Ever since Kate Upton donned a Canada Goose parka, and little else, on the cover of Sports Illustrated two years ago, the brand has exploded in popularity. Bain Capital bought a majority stake in the company in late 2013 for a valuation of around $250 million, according to reports. In the last decade, sales have grown by 4,000% and are reportedly expected to exceed $300 million this year. The last year alone saw sales increases in the 30% range, according to a spokeswoman. The company launched its U.S. ecommerce site in September.

Yet such blockbuster growth is hard to maintain.

"Our concern is that today, as a luxury brand, we believe people want to know what's behind the brand," said Mr. Spreekmeester. "They don't just want to buy an expensive jacket. They want to know the stories and we have to find a way to get to more people in more places faster than ever before."

The label's current popularity simply reinforces what Laurie Skreslet, the first Canadian to summit Mount Everest in 1982 and a 45-year veteran of mountaineering, has known for decades. "It's ironic to see something so pragmatic and practical turn into a fashion statement," he said. "It makes me smile."