How Harley-Davidson plans to halt its slide using millennial marketing 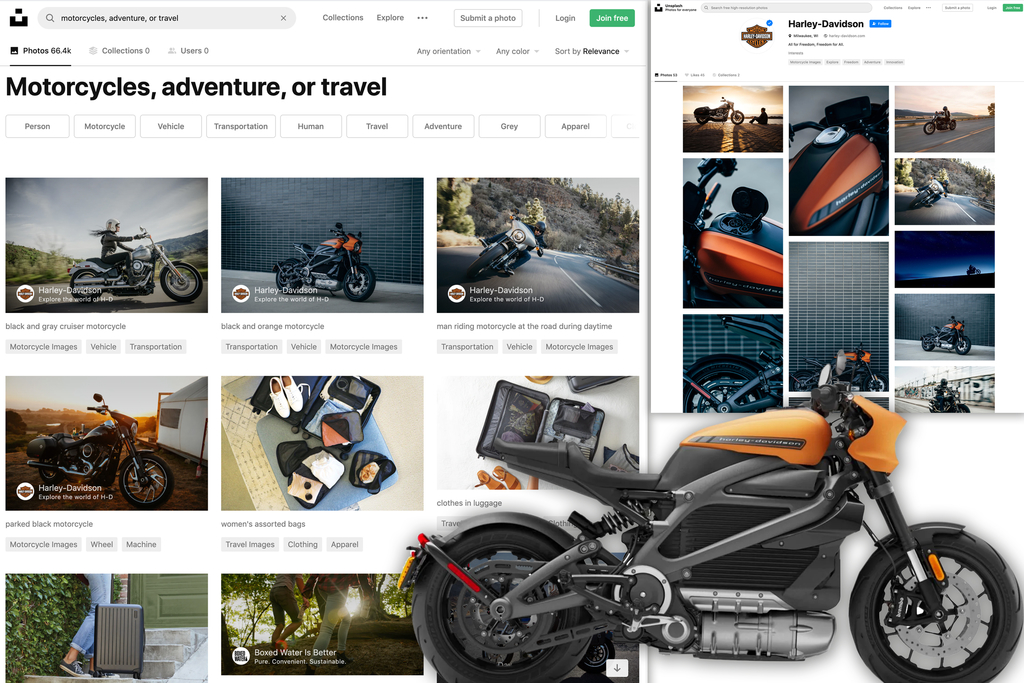 Harley-Davidson hopes its latest marketing strategies to create a new generation of riders, including the Unsplash for Brands campaign and the LiveWire electric motorcycle, will reverse declining sales.

Harley-Davidson reported yesterday that U.S. retail sales were down for the 12th consecutive quarter and 5 percent for the year—the lowest total in at least 16 years, according to Reuters. Donald Trump's exploitation of the company as a political football the past few years has had a significant impact on profits, but Harley's struggles to cultivate a new generation of riders over the past decade has been a longer-term cause of concern.

The company's focus on international sales and new products like the LiveWire electric motorcycle have not stemmed the tide. So it was not a surprise that after three years with IPG's Team Ignite, Harley-Davidson announced last February that it had chosen Droga5 as its creative agency of record to revivify the brand's image. But almost a year after the announcement, there have been no signs of what the innovative agency is planning.

David Droga, creative chairman and founder, tells Ad Age the agency’s first work for the client will debut in the coming weeks.

“We’ve been working with Harley-Davidson to get back to a lot of the fundamentals. We’re tweaking the brand identity and setting up new systems so when we do go out to market it will all be very comprehensive and consistent,” Droga says. “It’s one of the world’s most iconic brands, so it deserves proper understanding, robust thinking and all the respect that goes with that."

“We’ve been working with Harley-Davidson to get back to the fundamentals. It’s one of the world’s most iconic brands, so it deserves proper understanding, robust thinking and all the respect that goes with that." —David Droga, creative chairman and founder, Droga5

Harley-Davidson will turn 117 this year. Since its humble beginnings in a small shed in Milwaukee at the dawn of the 20th century, the company’s innovation and imagination have created a uniquely American motorcycle culture, making it one of the most recognized and revered brands in the world. To many, Harley-Davidson is the embodiment of the American rebel spirit. But its core demographic has aged, and motorcycles have been added to the growing pile of things millennials have “killed.”

Although CMO Heather Malenshek once told Digiday that Harley doesn’t “buy into the concept of millennials,” the impact of the company’s struggles to grow its business with the demographic is an open secret—and one that the company has been working to address with myriad marketing initiatives for years, including partnering with the Marketing Arm on an Instagram influencer party to celebrate Harley’s 115th anniversary.

When Harley-Davidson started thinking of another initiative that could leverage the viral marketing potential of online images, "we wanted a campaign that would establish a personal and emotional connection to the brand," says Alexandra Lorbiecki, Harley’s global brand innovation lead. "Harley-Davidson exists to enable the lifelong search for personal freedom, and whether it is for personal growth, exhilaration or escape, Harley-Davidson can offer these feelings and opportunities to a new generation of riders.”

Founded in 2013 as a Tumblr blog, Unsplash offers access to one million free, high-quality images. In 2019, after reaching more than one billion downloads—more than Adobe, Getty and Shutterstock combined—Unsplash launched Unsplash for Brands, which would allow brands to curate, amplify and syndicate their content to the platform’s broad audiences via a massive photo archive seen 12 billion times and by 300 million people each month.

For a brand like Harley-Davidson, the reach potential, the access to a new marketing channel and the opportunity to build a personal connection through visuals were a perfect fit. The motorcycle company was also drawn to Unsplash’s core demographic. “The typical Unsplash users are individuals ages 18 to 34 in the fields of marketing, design and PR, who earn more than $100k a year,” says CEO Mikael Cho. “These users tend to be creative influencers, writers and blog posters, and they are coming to our site specifically to find high-quality, unique images to share with their audience.”

Read the complete case study for the campaign results.