Beverage Giant Uses the Big Game and a Big Idea as Springboard for a Year's Worth of Content and Campaign Ideas
READ THIS NEXT
Trending: Reebok’s plant-based shoe and Sizzler’s flame-out 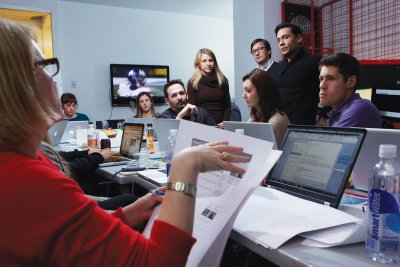 In the conference rooms, located at agency 360i in downtown Manhattan, social-media strategists, information-technology execs and interactive-marketing specialists from Coca-Cola, Wieden & Kennedy, Starcom MediaVest Group and PR shop Allidura plotted how they would respond in real-time to big plays and planned for any and every contingency they could imagine.

Coca-Cola's "Mirage" ad, which was released earlier in the week, featured showgirls, cowboys and badlanders racing through the desert for a bottle of Coke. People were encouraged to vote for their favorite team and sabotage competitors, all of which determined which ad Coke would run post-game.

In the social-media room, a giant poster showed each commercial pod and was littered with notes detailing what Coca-Cola would be doing at each point in the game -- from the content it would be promoting to when it would make the call as to which "Mirage" team snagged the Coke. In the production room, a jumble of cords connected the eight people responsible for monitoring site traffic and managing the more than 30 servers dedicated to "Mirage."

And in command central, execs were reviewing detailed content plans for each portion of the game, but they were also looking ahead to how they would engage consumers post-game and beyond. As of Friday afternoon, more than a million consumers had voted, and 1.5 million had watched "Mirage" on YouTube.

A year ago the brand was doing much the same thing as it prepped for the Polar Bowl -- a second-screen play that featured the Coke polar bears reacting to the game in real time. But while the campaign was, by all accounts, a massive success -- some 9 million consumers engaged with the bears -- Coca-Cola's execs believe the brand missed a huge opportunity, and required a course correction in 2013. 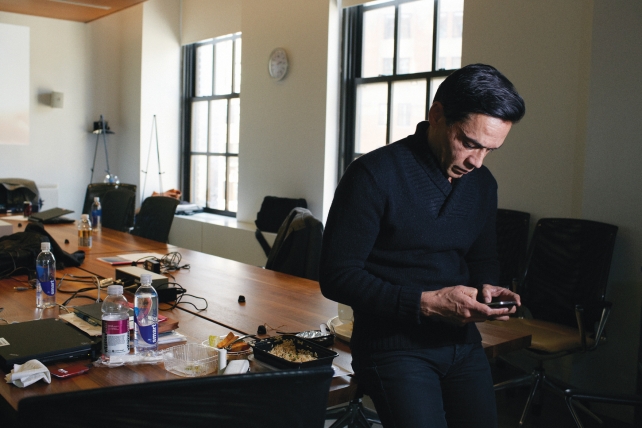 The Polar Bowl was too thematic and too closely tied to football, meaning it had limited use following the game, they said. And though consumers could interact via Facebook and Twitter, it was too passive, with fans simply watching the bears watching the game. But the biggest problem was the lack of continuity. The brand simply never came back to the millions of consumers who expressed interest in the Polar Bowl with similarly engaging content.

"There was no follow-through," said Pio Schunker, senior VP-integrated marketing communications for the Coca-Cola North America Group. "You had people coming in and saying, "This is actually amazing' and deciding they wanted to follow us. But then we never did anything [else] worthy of being followed. ... We missed a huge opportunity, and we wanted to course correct."

"We fell short last year," echoed Jennifer Healan, group director-integrated marketing content for Coca-Cola. "We had 9 million streams and grew our Twitter following by 22%, but then the conversation just fell from there. We didn't continue the conversation or capitalize on all those people talking about our brand."

During a series of conversations during the past two months, Coca-Cola execs took Ad Age through the process of making the Super Bowl -- an enormous stage with an enormous price tag -- work harder for the brand. No longer will the Big Game be a one-off event; instead execs are viewing it as the kickoff to a year's worth of marketing activities. And more importantly, the brand aims to create more repeatable content, as well as experiment with how to use the Super Bowl to affect sales.

To illustrate that, execs shared with Ad Age internal presentations detailing the brand's strategy, as well as the bulk of its campaign plans for the next six months. The goal is to have one brand idea that can spawn many pieces of communication, which are unique to specific audiences or seasons.

"Mirage," an interactive, "choose your own adventure"-style effort introduced what execs refer to as "Love of the Liquid," an internal rallying cry around which Coke execs will structure creative campaigns for the balance of the year. In a nod to that idea, the sound "Ahh" is woven throughout 2013 programs.

There's also a conscious effort to pull aspects of "Mirage" into campaigns throughout the year. The brand will closely tie the creative to retail partners. And interactivity and the use of custom content for various social-media platforms, as well as the creative's irreverence, wit and comedy, will all be hallmarks of coming campaigns.

Jeff Gillett, creative director at Wieden & Kennedy, said there will be strong second-screen components in all of the brand's work this year. A big lesson from Polar Bowl was that there's "a huge audience out there that isn't as engaged in the game as we think they are," he said. "It was eye-opening to us that so many would want to engage with a second screen when there's a big game going on."

The Super Bowl spot stars a deliciously cool-looking bottle of Coke. Likewise, a campaign targeting teens and launching in April focuses on the liquid, kicking off with a quirky video set in a science lab and discussing Coke's attributes. A series of games will focus on mobile and digital with the brand owning the URL "Ahh" on the web. Depending on how many "h's" the user enters, a different piece of content will be served up. In one game, consumers toss ice cubes into a Coke until it reaches 37 degrees, the ideal temperature for serving. In another, a container of fries turns into a chorus -- when they're all hit together they perform the "perfect" Ahh.

Like with "Mirage," "the goal is to amass a library of fluid, malleable content that responds to what's happening live," Mr. Schunker said, cautioning that while the creative all connects to common themes, he wanted to avoid "matching luggage," lest consumers get bored with the brand.

This summer, TV spots will tie aspects of the beverage to iconic summer images. When a Coke bottle is opened, a tent pops up; when the liquid fizzes, fireworks explode. And like the Super Bowl campaign, there are tie-ins to retail. In "Mirage," a Domino's delivery guy appeared in several online videos and 50,000 coupons for 20 oz. bottles of Coke were given away. In the summer campaign, clicking on a tent in the online video might offer camping tips and information on National Parks as well as a Coke coupon.

"How do we [take] a huge platform [and] translate to purchase in some way?" Mr. Schunker said.

But even before those major campaigns hit, there will be "microcampaigns" organized around offbeat celebrations, like National Random Acts of Kindness Week and National Bubble Week. The monthly events will become a way for Coca-Cola to engage fans that began following the brand during the Super Bowl. Each micro-campaign will last one week and include creative content for the same channels used during "Mirage" -- Twitter, Facebook, Instagram, Tumblr and YouTube.

One of the initial attractions of "Mirage" was that execs felt it was repeatable.

"[Mirage] is the biggest shoot we've ever done, in terms of content," said Mr. Schunker, noting that they're amortizing the cost of it over weeks, not days.

Coca-Cola even made a last-minute call to buy an additional post-game ad for the "Mirage" finale. The plan as of early January had been to air the finale during the second quarter -- that slot was filled by the "Security Camera" spot -- but execs felt that would be cutting the campaign short, given the massive amounts of content shot over two weeks in South Africa.

Coca-Cola is also considering a repeat of "Mirage" during other large-scale viewing events, like "American Idol" and Nascar races, though any repeat wouldn't have the same breadth as the Super Bowl effort. The campaign will also live on as stand-alone 30-second and 60-second ads.

"If 9 million engage, maybe you've got 4 million afterwards, and then we keep growing the fan base over the year, so that it's cumulative and additive, rather than growing and regrowing through each specific event," Mr. Schunker said.