No Time to Try a Pepsi Next? Brand Will Give You An 'Extra Hour' So You Can | Ad Age
Skip to main content
Sign In Register

No Time to Try a Pepsi Next? Brand Will Give You An 'Extra Hour' So You Can 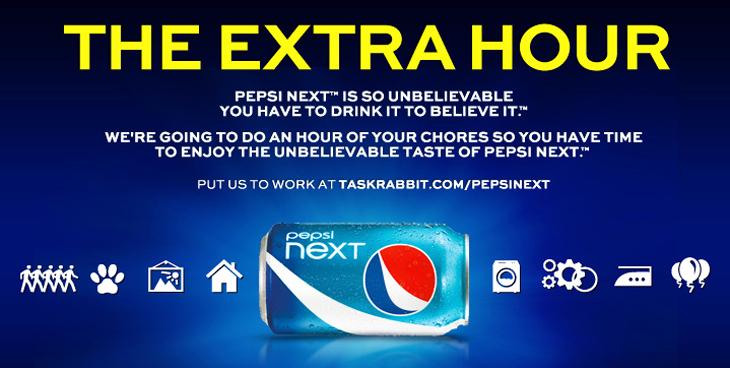 Pepsi is promoting Pepsi Next, in a campaign that promises to give people a "25th hour" in their day to tackle their to-do lists.

The campaign, orchestrated by The Barbarian Group, teams Pepsi with TaskRabbit, a startup website and mobile app that 's designed to boost productivity by enabling people to outsource jobs and tasks to (fully-vetted) people in their neighborhood -- a kind of concierge service by the hour.

To take part, people need to go to the website, and sign up. For the next four weeks until Nov. 12, Pepsi will be giving away 50 tasks a week. The winners will receive a dedicated Task Rabbit for one hour to tackle errands of their choosing, from preparing dinner to cleaning the house. The Task Rabbit will give a Pepsi NEXT for each winner to enjoy with their new found time.

Previously, the company created an "Internet Taste Test" to promote the beverage. Featuring Rob Riggle, Gary Vaynerchuck and meme Scumbag Steve, an app created by The Barbarian Group let you watch Funny or Die comedians taste Pepsi NEXT while they impersonated you.