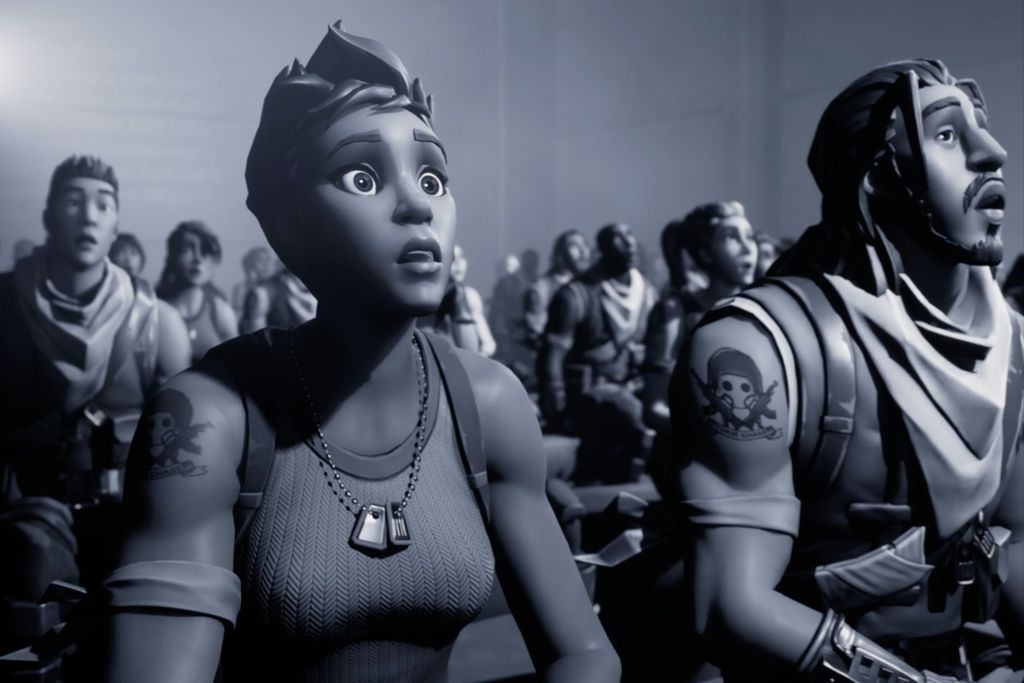 Talk about an epic move.

The "1984" parody spot Fortnite creator Epic Games created has got the ad world buzzing about its craft and its sheer gutsiness. Even so, no agency has stepped up to claim it. Epic so far could not be reached for confirmation, but one person close to the matter says the spot was created in-house.

In the unlikely case you missed it, the ad is a response to an antitrust lawsuit over access to the App Store and Apple’s 30 percent cut of monies made there. On Thursday, Apple dropped Fortnite from the platform, and Epic responded with a shot-for-shot spoof of the tech giant's breakthrough "1984" ad using Fortnite avatars rather than actors.

Epic turns the tables of the original spot, portraying Apple as the Big Brother levying monopolistic control over a brainwashed populace, rather than the insurgent who smashes barriers. It’s a positioning meant to tap into the public’s suspicion of Big Tech, which has been implicated in issues ranging from data privacy to election interference.

“This piece is really brave. I think it’s completely in line with the game’s feisty nature, and frankly I think their fan base is going to love it, as they’re probably hoping and praying,” says Jason Sperling, senior VP and chief, creative development at RPA, who was a creative director on another iconic Apple campaign, “Get a Mac,” at TBWA\Chiat\Day.

“You’ve got to love challenger brands that don’t mind being in the crosshairs of big corporations, and who are either so naive or so impossibly fearless that they’re willing to go to whatever lengths to create impact. Even if it means fighting the ultimate challenger brand from the '80s with the weapons that they themselves fashioned to perfection.”

High praise has come from others in the industry, too. "Honestly, this is one of the great advertising/marketing/strategy moments of the last 20 years, tweeted Ian Schafer, founder of Deep Focus, now co-Founder and CEO of Kindred.

Honestly, this is one of the great advertising/marketing/strategy moments of the last 20 years. https://t.co/Uy4XSNX77n

The response from gamers has been mixed, though. There is wide support for the hashtag #FreeFortnite, which directs fans to call for the game’s reinstatement and to request a refund directly from Apple, but Apple fans are also out in force, and a sizable contingent are just upset that they can no longer play Fortnite on their iOS devices, no matter the reason. There is also widespread confusion from gamers who don’t get the reference, too youthful to recall the original Apple spot or unfamiliar with George Orwell’s novel.

I literally have no idea what’s going on either

With production values so high, the parody spot has obviously been in the works for a while—though maybe not for that long a while. According to a creative at an agency that has worked with Epic Games who wanted to remain anonymous while speaking about a client, the parody spot was likely made in-house using the Unreal Engine, the 3D game engine made by Epic that is licensed for use video games and filmmaking, due to its ability to render three-dimensional environments on the fly.

“[Using Unreal], I can make scenes in a day that used to take four months,” the creative says. Disney used a wraparound screen with projected images of landscapes creating with the Unreal Engine to film “The Mandalorian,” and agencies can use the platform for quick-turnaround shoots, too, he adds. “In the middle of a pandemic, we can’t travel anywhere, but I can shoot a spot where we can travel around the world, and I can have it done in the next 30 days.”

That means Epic can also quickly create new ads to respond to any changes in the litigation or moves from Apple. “If Apple comes out with something, these guys can come out a week later with a fully rendered CG universe that immediately responds in some clever way to what they’re saying,” the creative says. “Apple doesn’t want to get in a war with these guys, and neither does Google.”

TBWA\Media Arts Lab, which handles much of Apple’s creative work, declined to comment for this story, citing the ongoing lawsuit involving its client. For its part, Apple did not comment about the parody itself but expressed disappointment in the situation in a statement to Ad Age.

“Epic Games took the unfortunate step of violating the App Store guidelines that are applied equally to every developer and designed to keep the store safe for our users. As a result their Fortnite app has been removed from the store. Epic enabled a feature in its app which was not reviewed or approved by Apple, and they did so with the express intent of violating the App Store guidelines regarding in-app payments that apply to every developer who sells digital goods or services.

"Epic has had apps on the App Store for a decade, and have benefited from the App Store ecosystem—including its tools, testing, and distribution that Apple provides to all developers. Epic agreed to the App Store terms and guidelines freely and we’re glad they’ve built such a successful business on the App Store. The fact that their business interests now lead them to push for a special arrangement does not change the fact that these guidelines create a level playing field for all developers and make the store safe for all users. We will make every effort to work with Epic to resolve these violations so they can return Fortnite to the App Store.”

But even if Epic's move is lauded as a thumb in the eye to Apple, will the tactic actually work? "The likelihood is it will have the same effect as a bee sting on a rhino," Sperling says. "Apple is ubiquitous and no one is walking away from the platform over this. But at the very least it has the attention of their audience. Rather than just playing out quietly in news headlines, it’s going to also play out with a lot more energy and anger on social media."