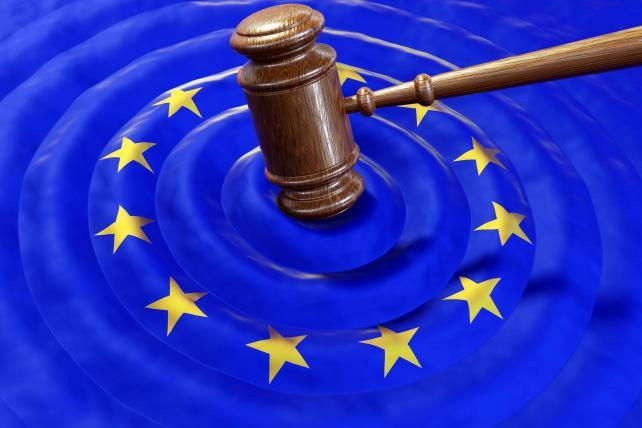 Two years ago, Google changed the color of its little icon that appears next to ads in its search results to green from yellow, a tiny tweak to "improve the look and feel" of its pages. But when you're the world's largest search engine, capturing some 95 percent of all mobile search queries, even tiny tweaks have the potential to cause large effects. An infinitesimal uptick in click-through rates could increase revenue for Google by tens of millions of dollars.

Now consider what happens when Google isn't making minor changes in the name of optimization, but radical changes to how it operates its all-powerful search business. Because the company is plugged into nearly every facet of the internet, those shifts could affect the rest of the digital ad ecosystem.

The early outlines may start to become clear soon, following the European Union's decision to fine Google a whopping $5 billion for what it described as illegal practices to strengthen its dominance in search advertising—and to bar those practices.

Phone manufacturers such as Samsung, HTC and LG are free to use Google's Android mobile operating system, but if they want to include Google's Play Store, where consumers download apps, Google required them to pre-install its search bar and Chrome browser. Google also paid manufacturers and network operators to make sure that only the Google search app was pre-installed on such devices, the EU said. All of that limits competition, according to the EU.

"There is a saying that you don't look a gift horse in the mouth," Commissioner Margrethe Vestager wrote as the EU returned its findings on July 18. "Well, the evidence shows that when it comes to search apps and mobile browsers, the vast majority of users simply take what comes on their device and do not download competing apps."

Vestager pointed out that in 2016, more than 95 percent of search queries on Android were made through Google search, adding that these Android phones had both the company's search bar and Chrome pre-installed. "On Windows mobile devices, on the other hand, Google's search engine is not pre-installed," she said, adding that as a result, "more than 75 percent of search queries happened on Bing, which is the pre installed search engine on Windows Mobile."

Such browser companies have different views on what a modern-era browser should be; Edge, for example, has integrated AdBlock Plus into its mobile app. Microsoft also operates Bing, the second largest search engine, and could afford to pay top dollar to become the default search engine in, say, Samsung's popular Galaxy phone.

"The EU action could result in increased access to consumers for Google competitors in the EU," says Scott Shamberg, CEO of Publicis-owned Performics. "This could slightly shift strategy for advertisers. It's possible that Google could see a decline in mobile search share in the EU, spurring advertisers to invest more in other platforms."

"However, Google search is especially dominant in the EU versus other markets—even the U.S.—and is so ingrained with consumers, that this may not have a significant impact on Google's EU share," Shamberg adds.

Some have indeed suggested that Google has already become so entrenched that it might simply be too late to disrupt its business.

Heather Physioc, director of organic search and performance content at agency VML, agrees that while the EU's decision does open up opportunity for other browsers and search engines to capture market share, Google's long-standing dominance will make it tough for competitors to put a dent in its business.

"Google's vast resources and speed of innovation are unparalleled—it's hard for anyone to break in," she says. "Google has been the dominant player in search for more than a decade. Emerging and established competitors may have a narrow opening to take some market share away, but to most consumers, Google is the superior search product. It has long been the default in consumers' minds."

As Physioc points out, when consumers in Russia started being asked to select a default search engine instead of having Google pre-selected, the gap in market share between Google and Yandex "did start to close significantly," she says, but adds that "in the EU and many other global markets, there aren't all that many viable competitors, so it's a big ask."

The move does, however, set the stage for the next fight for dominance: voice activated search.

"Voice may be the next battleground for search marketing share amongst players like Google, Microsoft, Amazon and Apple," Shamberg says. "Default mobile settings do play a role in helping users form mobile search habits, including voice. But ultimately, the platform that creates the best user experience that provides consumers with answers within intent moments will capture the most share."

What about the rest of the digital ad ecosystem?

Google works with nearly every publisher and marketer to either help them sell or buy ads. It also has an analytics platform and its search practice. The EU's move could rattle an entire industry built on the backbone of Google.

"The ad ecosystem is where Google will take the biggest hit if usage declines," Physioc says. "Use and visibility is critical to the success of ads across Google paid search, product listing ads and video ads on YouTube. Mobile accessibility to those ads has caused revenue from these sources to explode, and lower adoption rates can definitely put a dent in that."

As Physioc explains it, Google will have to figure out a way to offset revenue should they pay manufacturers and telecom companies money to feature their apps by default.

Shamberg, the Performics exec, says brands will have to focus on the bigger picture, adding that the EU outcome and suggestions are just another component of a search and performance marketing ecosystem that has been fragmenting for years.

"Macro consumer trends—such as more people starting their product searches on Amazon, or people spending more time in-app versus on the mobile web—marketplace dynamics and emerging opportunities make it critical for advertisers to diversify well beyond Google," Shamberg says. "Our view is that advertisers who have diversified strategies will avoid negative impact on performance, no matter what happens with the regulatory bodies and no matter what changes Google does or doesn't make on the search results page."

"Advertisers will follow the consumer, whether or not that consumer is on Google," Shamberg adds. "It's how Amazon got so big so fast in search and discoverability."