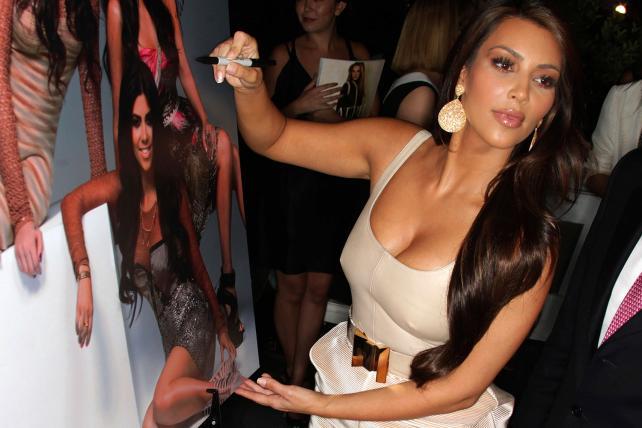 Kim Kardashian at The London in West Hollywood in 2010
Credit: Frederick M. Brown/Edstock/iStock

Kim Kardashian is always waist training, according to her Instagram. In a May 2015 selfie, she wore an undershirt, black leggings and a tight black tube around her waist. The purpose of the shot: promoting the band around her midsection, a so-called waist trainer from Miami-based company Waist Gang Society, to her 62 million followers. Waist trainer makers claim their products reduce waistlines, and one such celebrity social media post can send sales soaring for several days, according Waist Gang Society's owner, who goes by the single name Premadonna.

Forms of waist training have been around for centuries -- the word "corset" dates back to 1300 -- and the goal has remained the same: Make a woman's waist shrink, or at least appear to shrink, using tight fabric around the midsection. Some of these undergarments include boning, for stiffness; others are made of more flexible materials such as latex. Some zip, some tie, and some, like Ms. Kardashian's, fasten through hook-and-eye closings.

In the past two years, waist trainers have surged in popularity. According to Google Trends, searches for the phrase "waist trainer" began growing in August 2013 and maintained an upward trajectory, peaking in March 2015.

Although Google advertisements can help sales, several waist trainer companies said sales are most heavily impacted by Instagram, where the hashtags "waist trainer" and "waist training" have been used more than a million times, collectively. Such posts typically feature a woman wearing the trainer or showing off the results of use.

Brands deem Instagram celebrities with scores of followers to have cultural influence, and companies pay them handsomely to promote their products on the social network. Blac Chyna, a model with 5.2 million followers, reportedly charges $2,000 per post, and promoted a waist trainer from Instacurve during the holiday season. Reality show stars commonly use their Instagram accounts this way, but so do more prominent celebrities: Vogue cover model Gigi Hadid (14.2 million followers) has promoted Maybelline, a company she models for, and pop star Britney Spears (8.5 million followers) has extolled the virtues of Eos lip balm.

"Celebrity influence through social media has been the primary factor" for sales growth, said Ruben Soto, chief executive of Chicago-based waist trainer company Hourglass Angel. The company's sales have nearly tripled in the past two years, Mr. Soto said. "It became acceptable to post selfies on Instagram wearing these products after celebrities wore them. They opened the door." Waist Gang Society, which has more than 333,000 followers on Instagram, said sales have been "increasing steadily over the past two years."

Noticing the success of companies like Hourglass Angel and Waist Gang Society, Atik Motiwala, a former digital marketer based in Florida, started his own waist trainer enterprise, Hourglass Express, about a year ago. "We saw the popularity, and we decided to give it a shot," he said. "I had a family member who was trying to purchase a waist trainer and they were out of stock. I said, 'If they're sold out, that's a good sign.'"

Mr. Motiwala promoted Hourglass Express through Facebook and Google advertisements, but is about to expand into Instagram endorsements. Thus far, Hourglass Express hasn't worked with any "official Instagram celebrities," said Motiwala, but he is negotiating pay-per-post deals with several users, whom he expects to pay $1,000 to $2,000 per endorsement.

Royal Lioness, a Pennsylvania-based waist training company launched last June selling a lower-priced trainer, also woos Instagram celebrities, but CEO Brian Nguah said he provides them products, not cash. "We don't work with them, but we reach out to them," he explained. "We show them what we are doing. We ask them to try it out, show them our [fitness] routines, and if they like it, they can talk about us. If not, that's understandable, and they can still keep [the trainer] and use it how they like. It's not necessarily a business partnership."

No permanent results
There's little scientific evidence, though, that the weight-loss effects of waist trainers are real. "What you see is just temporary while you're wearing it. It's just squeezing in the fat or excess tissue," said Dr. Margarita Rohr, an internist at New York University's Joan H. Tisch Center for Women's Health. "As soon as you remove it, the fat goes back to where it was. You're not going to see any permanent results using the trainer." Dr. Rohr also warned that the products can cause skin irritation and artery constriction.

Little to no research has been done about the side effects of wearing a waist trainer for long periods of time, said Dr. Sandra Adamson Fryhofer, an internal medicine expert in Atlanta, but physicians worry that frequent waist trainer users could be squeezing and displacing organs, putting pressure on the lungs, forcing acid into the esophagus, and causing heartburn.

Most companies emphasize some degree of caution when using the trainers. The Waist Gang web site suggests users "begin by wearing the corset two to four hours per day" and add time "until you are able to wear the corset throughout the entire day."

For the average user, even half the day can be a lofty goal. Krista Grubb, a sales consultant who purchased Premadonna's trainer, said she could wear the trainer for up to five hours, but now reserves it primarily for evenings out. "I tried to wear it all the time, and I felt like it broke my ribs," she explained. "It was super painful, but people do it." Ms. Grubb purchased the trainer after a Google search for "Kim Kardashian waist trainer" and said the garments are a frequent sight on her social media feeds.

For those pursuing a more traditional path to slimming down -- diet and exercise -- there are custom trainers just for working out. It's just as common to see an image of a trainer-clad woman at the gym as in a gown on Instagram. These workout-specific trainers are particularly concerning to physicians, who warn that constricting the torso while exercising could limit oxygen intake.

"It actually hinders your workout," said Dr. Rohr. "You need to be able to expand and take big, deep breathes when you're exercising. It limits your ability to work out."

There is, however, one potential connection between the products and weight loss: binding the stomach can temporarily suppress hunger. "If your stomach is compressed and you swallow some food, and there's no place for it to go, you're not going to want to eat any more," explained Dr. Fryhofer. "But when you take the thing off, you'll still be hungry."

Doctors discouraged long-term and gym use but were less concerned about slipping on the trainer for an occasional evening out, as Waist Gang Society customer Ms. Grubb does. "I'll probably wear it forever," she said. "It makes your body look really nice in a dress. I can't see ever not wanting to look like Jessica Rabbit."