Snapchat's users don't hate ads after all -- at least according to a survey commissioned by Snapchat.

When the ephemeral messaging service announced in October that it would start running ads within its mobile app, Snapchat appeared almost reticent to let brands pay to promote themselves in its app.

"An advertisement will appear in your Recent Updates from time to time, and you can choose if you want to watch it. No biggie," Snapchat wrote in a company blog post announcing the first ad.

But accordng to a Snapchat-commissioned survey conducted by Millward Brown Digital, a division of WPP's Kantar, a lot of the people who chose to watch Snapchat's first handful of ads liked what they saw.

However, not all Snapchat ads were equally liked. Within two months of unveiling its first ad product, Snapchat introduced a second that more respondents preferred. The first "Brand Story" ad unit was placed a click-to-watch, 20-second video ad as a standalone post in people's "Recent Updates" feed. The second ad unit weaved brands into Snapchat's "Our Story" posts that curate pictures or videos people post to Snapchat related to an event like a college football game and stitch them into one longer post. 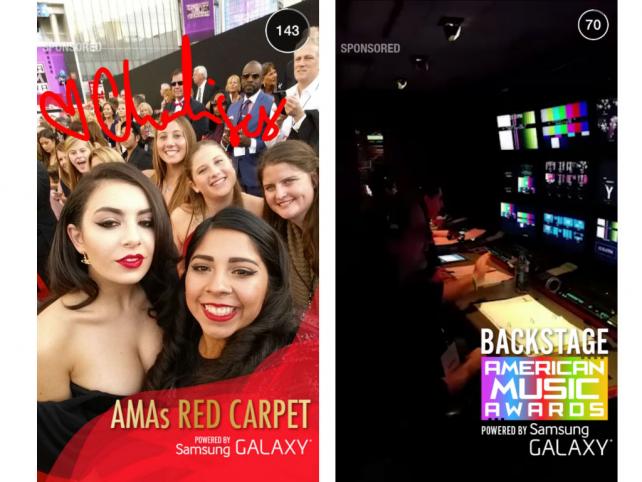 Snapchat debuted its second ad product during the American Music Awards, an

Millward Brown Digital asked people specifically about the ads that appeared in an "Our Story" feed -- as opposed to overall "Brand Story" -- for a better comparison between Snapchat's two ad types. However, it didn't ask a follow-up question to determine why people liked the "Our Story" ads more than the regular "Brand Story" spots.

The percentages of likes for both of Snapchat's ad units best the 17% of people in the U.S. who say they like generic smartphone ads, according to a Millward Brown Digital study released earlier this year.

For the Snapchat study, Millward Brown Digital surveyed 600 people in the U.S. who represented the behavioral and demographic makeup of Snapchat's domestic user base. Of those surveyed, 300 respondents had seen an ad on Snapchat and the remaining 300 had not seen the ads and served as a control group against those who did.

The study compared the two groups to determine how many people actually remembered an ad they saw on Snapchat vs. those who only thought they did.

Millward Brown calculated the number of people in the control group who claimed to have seen an ad on Snapchat but never actually did. It then subtracted that from the number of people in the exposed group who were shown the ads and claimed to remember them. As a result, the study found that at least 16% of those who were shown an ad on Snapchat remembered that specific ad. (The recall number could be higher among those who actually saw the ad assuming they weren't mistakenly saying they saw the ad.)

The study also found that people who checked out a 20-second video ad for video game "Dragon Age: Inquisition" were 7% more likely to buy the game than those who hadn't seen the ad. And people who watched the 20-second spots for Universal Pictures' films "Ouija" and "Dumb and Dumber To" were 13% more likely to buy tickets to see the actual movies in theaters on opening weekend.

For those who missed Snapchat's first ad -- for Universal Pictures' "Ouija" -- here's a look: