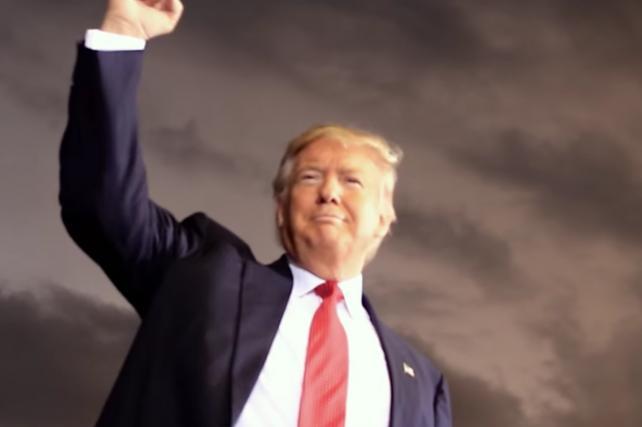 Donald Trump's White House is reeling following a one-two punch of revelations that cast doubt on the fealty of the president's closest advisers and risked further dividing his fractious staff.

The first shot came in excerpts from an upcoming book by journalist Bob Woodward, "Fear: Trump in the White House," describing an administration consumed by brutal infighting, and a president whose anger at the Russia investigation can paralyze the West Wing for days at a time.

The second, and potentially more devastating blow, landed Wednesday with the publication of an op-ed in The New York Times by an unidentified senior administration official who said some of the president's closest advisers are working in secret to thwart the president's "more misguided impulses until he is out of office."

Shock and frustration gripped the White House staff as Trump, who demands loyalty from subordinates, publicly lashed out about the op-ed. It wasn't immediately clear what efforts the administration was making, if any, to unearth the author, though top officials including Vice President Mike Pence and Secretary of State Michael Pompeo issued public denials.

The development was poised to distract the president and his top advisers just as his trade war with China escalates and he gears up to try to keep Congress in his party's control.

"If the GUTLESS anonymous person does indeed exist, the Times must, for National Security purposes, turn him/her over to government at once!" Trump said in a tweet Wednesday evening.

The timing of the op-ed, coming a day after the Washington Post published excerpts from Woodward's book that portrayed the president as mercurial, inept and untruthful, turned an already bad week at the White House into one of Trump's worst. Some White House aides contacted reporters to ask who they thought may have written the Times piece. Two White House officials speculated that the author works for a federal agency, not directly for the president.

The Times said in a note appended to the op-ed that it knew the author's identity but that "publishing this essay anonymously is the only way to deliver an important perspective to our readers." The writer indicated that he or she is a political appointee, not a career civil servant—a class of federal employees that Trump and some of his allies have long derided as a "deep state" set on undermining him.

A Pence spokesman, Jarrod Agen, said on Twitter that "the Vice President puts his name on his Op-Eds." Pompeo told reporters in New Delhi that the op-ed was the work of a "deceptive bad actor" and faulted the Times for publishing it. Director of National Intelligence Dan Coats issued a statement saying that speculation the op-ed was written by him or his principal deputy, Susan Gordon, was "patently false."

Homeland Security Secretary Kirstjen Nielsen's press secretary, Tyler Houlton, said that "these types of political attacks are beneath the secretary and the department's mission" in a statement. Defense Secretary James Mattis's spokeswoman, Dana White, told reporters that he didn't write the op-ed. Treasury Secretary Steven Mnuchin's spokesman, Tony Sayegh, said on Twitter that "it is laughable to think this could come from the secretary."

"The Deep State and the Left, and their vehicle, the Fake News Media, are going Crazy - & they don't know what to do," Trump said in tweet early Thursday. "The Economy is booming like never before, Jobs are at Historic Highs, soon TWO Supreme Court Justices & maybe Declassification to find Additional Corruption. Wow!"

His reference to declassification wasn't explained, but some House Republicans are agitating for the president to order the Department of Justice to release unredacted documents related to the investigation into Russian interference in the 2016 election, including a surveillance warrant for a Trump campaign adviser, Carter Page. Trump has repeatedly hinted in recent tweets that he may involve himself in the investigation, even though it has in part targeted him and his campaign.

The op-ed is also a powerful distraction just as Trump gets ready to campaign on behalf of imperiled Republican congressional candidates across the country. The White House has promised he'll make more than 40 campaign stops before the November midterms, when Democrats are favored to capture the House of Representatives.

Trump leaves today for Montana, where Republicans hope to take a Senate seat from Democrat Jon Tester. He'll hold a campaign rally in Billings this evening. He proceeds to North Dakota on Friday to campaign against Democratic Senator Heidi Heitkamp.