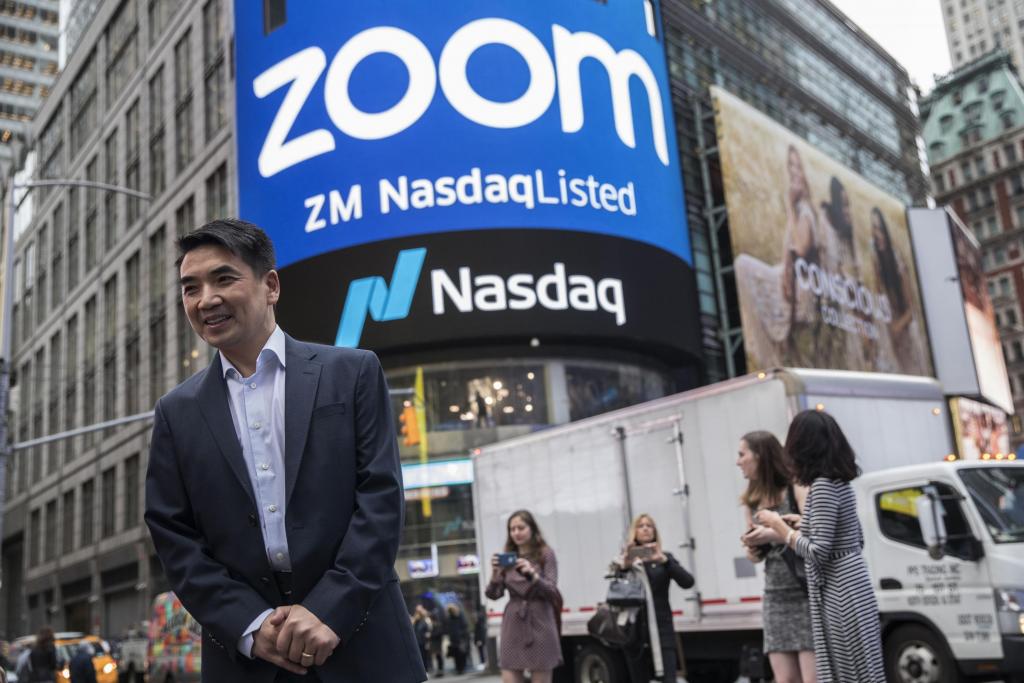 Eric Yuan, founder and chief executive officer of Zoom Video Communications Inc., stands for a photograph following the company's initial public offering (IPO) outside the Nasdaq MarketSite in New York, U.S., on Thursday, April 18, 2019. Zoom reported net income of $7.6 million on revenue of $331 million for the year ended January, and is now worth nine times the $1 billion valuation it secured after a funding round two years ago.

Zoom Video Communications Inc. soared in its trading debut to more than 16 times its last private valuation and making a billionaire of its founder. Shares of the San-Jose based video-conferencing service opened at $65 each, after Zoom sold 20.9 million shares Wednesday to raise $751 million in its U.S. initial public offering—the fourth-biggest of the year.

The jump in the shares puts Zoom’s valuation above that of two companies that raised more money in their recent IPOs. Tradeweb Markets Inc., which raised $1.1 billion in the third biggest U.S. listing this year, has climbed 45 percent since its debut for a total value of about $8.7 billion. Pinterest Inc., which also started trading Thursday, climbed 26.5 percent to a market valuation of $12.7 billion.

At its highest price on Thursday, Zoom even briefly overtook the market valuation of Lyft Inc., the year’s biggest IPO so far. Shares of the ride-hailing company are down 19 percent since it raised $2.3 billion in March for a valuation of $16.7 billion.

Zoom, unlike most of tech unicorns that have gone public or plan to this year, has made a profit. It reported net income of $7.6 million for the year ended January on revenue of $331 million, compared with a loss of $3.8 million a year earlier on revenue of $151 million.

Zoom’s financials are “one of the most impressive’’ ever seen by D.A. Davidson in an IPO filing, analyst Rishi Jaluria wrote in a note to clients in March. He said at the time that he wouldn’t be surprised if it reached a valuation of $10 billion to $15 billion on its first day as a public company.

The company has said its mission is to make video communication “frictionless,” as more employees work remotely and use conferencing services to connect with coworkers. International Data Corp. has estimated that the segments of the market in which Zoom operates could be worth as much as $43.1 billion by 2022, according to a regulatory filing.

Its customers include Uber, which averaged 14 million minutes per month spent in Zoom meetings in 2018, as well as media company Discovery Inc. and software maker VMware Inc.

Still, the business isn’t without risks. Though the standard disclaimer in many IPO documents—that the company may never be profitable -- is missing, Zoom cited increased competition, service outages and cybersecurity threats as concerns that investors should be aware of, acknowledging that its security measures have been compromised in the past and could be again.

Zoom also noted its large research and development operations in China, where it employed more than 500 people as of January. This, it said, could expose the company to “market scrutiny regarding the integrity of our solution or data security features,” especially against the backdrop of the Trump administration’s continued efforts to close a trade deal with China.

The offering was led by Morgan Stanley, JPMorgan Chase & Co., Goldman Sachs Group Inc. and Credit Suisse Group AG. The stock is trading on the Nasdaq Global Select Market under the ticker ZM.