Opinion: We must shift from inclusion rhetoric to accountability and consequences | Ad Age
Skip to main content
Sign In Register

Opinion: We must shift from inclusion rhetoric to accountability and consequences

No longer can ‘We can’t find any’ great Black talent be the answer
READ THIS NEXT
3 keys to multicultural marketing in a privacy-first world
Credit: iStock

As a Black female executive, I am too often the first or only one in the C-suite or the boardroom. Sure, I feel a sense of pride and accomplishment about sitting in the room where it happens, but contentment has been more elusive. Why? Because when I look around the room and see few or no one that looks like me, I am profoundly aware of the inequality and seeming indifference that excludes so many of us from coveted positions.

I entered the C-suite by being a consumer-driven chief marketing officer and chief customer officer and have held marketing leadership positions at multinational brands such as Citigroup, Nokia, Verizon and the National Football League. I’ve served and sit on several corporate boards.

I’m aware of the steep ladder I climbed and the successful track record that propelled me. But I also know the backstory of clawing my way up and battling the double demons of race and gender with one hand, all the while clinging onto the ladder with the other. As I’ve risen through the ranks, people have said, “You’ve made it.” Accomplishing this as an African American woman while graduating from not one but two HBCUs (Spelman College and Clark Atlanta University) puts me in rare company. However, I still feel gripped by an intense obligation and urgent need to assist in changing this census.

The first time I discovered the playing field was not level, I was newly promoted and feeling good about how fast I’d risen and not at all concerned about my compensation. I assumed my pay was commensurate with my “superior” rating. I was friends with a white male colleague who joined the company the same year and at the same level and like me was a newly promoted manager. He also had received a “superior” performance rating. In conversation over drinks one evening, he mentioned his salary. I sat motionless as I comprehended the vast difference in our “good fortune.”

Noticing my change in mood, he asked “What’s wrong?” I put on my best game face and mentioned that I was late for dinner at home. Days later, feeling marginalized, I decided to discuss this with my boss. With 10 minutes left in our meeting, I summoned the courage to ask him for a raise. He looked at me and said, “Well, you already make a nice salary.” But in my mind (and likely in his), the sentence ended with “... for a Black woman.” I asked him for a peer salary review. Two months later, I received an increase that brought me much closer to my colleague’s salary.

I don’t know why it was not fully closed. But I know it taught me to fight for the right level of compensation and to know my worth. Not only for me, but for others.

Over the years, I learned the best way for me to create change was to dispel the pervasive myths that prevail regarding the availability of great Black talent. I decided to make myself accountable rather than waiting for action. No longer would “We can’t find any” be an acceptable answer. I would approach diversity with intentionality and take decisive action wherever I landed.

Creating change is hard. Some company executives pat themselves on the back for requiring diverse slates but too few yield actual hires from diverse backgrounds, due to lack of accountability and consequences.

I required that my agencies and partners hire and retain diverse talent to work on my accounts. After demonstrating that Black talent could indeed be found, I worked with HR to help imbed insights regarding successful recruitment strategies. I also worked to ensure compensation was fair for all by requesting salary reviews for individuals at all levels that reported to me, which included data such as salary, gender, ethnicity, start date, education, rating, bonus, merit and tenure in role. When I encountered issues, I partnered with HR to fix them.

CMOs are hired and retained for their ability to create profitable change that is sustainable...and that’s not easy. Studies consistently show that on average, CMOs have the highest turnover and shortest tenure in the C-suite. We are also more likely to be second-guessed on issues due to the highly visible nature of our work.

Now layer on race. I want more Black marketers in the C-suite of companies that place a premium on marketing as both the voice of the customer and an engine for growth.

I also want to send the elevator back down to pick up more riders that emerge faster, stronger and smarter as a result of help provided by me and others. There aren’t enough Black leaders with marketing backgrounds and too few are featured, interviewed, or appear on main stages and “best of” roundups. I want to change this.

I am creating an alliance for those who want to come together to share, learn, elevate the profession of marketing and pay it forward in order to create opportunity, access and equality for the current and next generation of Black marketing leaders. I’m working now to build a bigger, better talent pipeline that produces more Black marketing talent by creating what does not exist. I will have a major announcement soon.

To create meaningful change, we must shift from the rhetoric of progress and inclusion to the power of personal accountability and consequences. There’s no better time to have this conversation than Black History Month—but this energy must be sustained every month, every day moving forward. 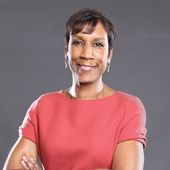 Jerri DeVard has served in the C-suite as the chief marketing officer of several F100 global companies and serves as a director on several corporate boards.