Ad Age Sits Down With the Agency's Freshly-Appointed Global Leader
READ THIS NEXT
Q&A: Rob Reilly explains why he is moving to WPP 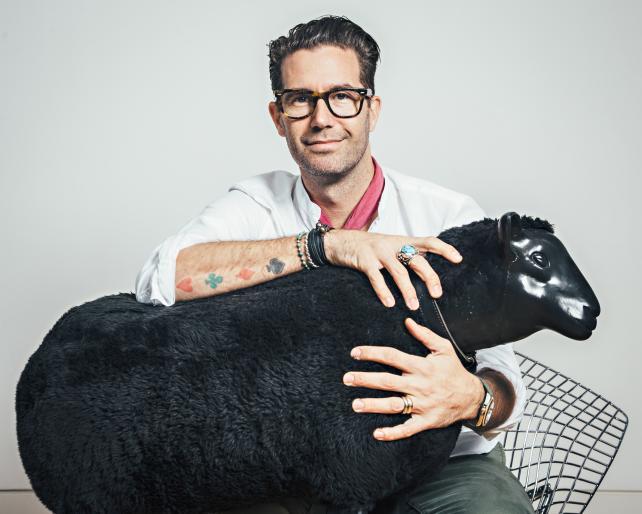 BBH has announced that Pelle Sjoenell, the executive creative director of the agency's Los Angeles office, has stepped up to the post of worldwide chief creative officer. He'll be partnering with Global CEO Neil Munn and moves into the role after former global CCO Alexandre Gama relinquished the post to focus more closely on his own shop, the Publicis Groupe-owned Neogama, among other projects.

Mr. Sjoenell is an unusual, but exciting choice for the agency. He was known for bringing a famously "Swedish," collaborative approach when he joined the New York office from Fallon Minneapolis in 2007 alongside his brother Calle Sjoenell, former Ogilvy New York CCO and now CCO at MullenLowe Brindfors. While at BBH New York, Mr. Sjoenell worked on landmark efforts for Google, including the "Dear Sophie" ad, arguably one of the first efforts to bring a human side to tech marketing; Axe's "Clean Your Balls" and the Titanium Lion-winning campaign for Oasis, "Dig Out Your Soul in the Streets."

In 2010, he headed out west to open the brand's outpost in Los Angeles, where he will continue to lead projects that sit at the intersection of advertising, entertainment and tech. The shop's recent efforts include branded content plays such as the "California Inspires Me" short films for Google Play and California Sunday, comprising inspirational animated stories about creativity from celebrities like James Franco, Jack Black and Kim Gordon. There he's also steered the agency's partnership with Scooter Braun and his SB Projects on The Creative Studio, a next-gen content company that meshes BBH's strategic, creative thinking with Mr. Braun's entertainment and media savvy on brand-related initiatives.

Mr. Sjoenell's appointment comes at a time when BBH is transitioning. In 2014, the agency parted ways with one of its most famous global clients, "Johnnie Walker," and the industry said goodbye to the beloved tagline, "Keep Walking." Meanwhile, BBH has expanded its influence globally. Outside of its London headquarters and New York, it has offices in Mumbai, Singapore, Stockholm, Sao Paulo and Mr. Sjoenell's Los Angeles home base. Where Mr. Sjoenell plays now is quite different from the well-honed advertising machine that is the London "Mothersheep," as he describes it, and it will be interesting to see how the new approaches he's tested will play out more broadly.

Ad Age spoke with Mr. Sjoenell about his plans in the new post.

Advertising Age: How long have you been thinking about this role, and how do you feel about becoming worldwide chief creative officer now?

Pelle Sjoenell: When I was 13 years old I went to a cinema in Sweden, and I sneaked into a James Bond movie and I saw my first Levi's ad, in the '80s. It was "The Laundrette" with Nick Kamen. It literally changed my life. It was the coolest thing I'd ever seen. I imagine it was like when my parents heard The Beatles for the first time. We didn't have advertising on TV in Sweden back then. So I decided there and then that that's what I wanted to do. I haven't done anything else since. That was a BBH spot, so to do this now, you could say I've been thinking about it for my whole life. It's such a huge honor to do this now when every brand and the industry, we too, are in transition. I couldn't be more excited.

The ad that started it all.

Ad Age: Given how the industry and the agency are in transition, how has that affected the shop and your take on your charge?

Mr. Sjoenell: It's very simple for me. It's always been about the same thing, the work. But you have to do your homework. You have to know the audience, the market, and strategy is more important than ever. And then to marry that with creativity. All the greatest agencies are the ones that can balance those two, so for me, that formula is still incredibly strong and that's been built for over 30 years here. The exciting thing now is that there are so many more things to do that with, like with what I've been doing here in L.A. with entertainment, content and technology. It's been a perfect kind of trial to use the BBH medicine on new formats. I've rehearsed on a smaller scale here. Like you said, every industry is in transformation, but that's what makes it exciting to do something [backed by] history. I think it's fantastic to be able to work with my hero, John Hegarty and have him as my mentor. I think that master-disciple thing is something we've forgotten a little bit, when it seems all about someone who's going to change everything. I think it's about optimizing.

Mr. Sjoenell: For me, it's absolutely an opportunity to do something new. It's about supporting the roles from underneath and it's a connector's role. Our network is several offices, we know each other and we like each other and we don't compete. And I know all the leadership, and most people in all our offices already. That's how we work and that's an incredible strength. I see this role as building on that. We all think the same, but we have very different training and different markets to play with. To gather that expertise and have that as an offering to our clients who are going into new territories is very exciting. Obviously, I'm a Swede and collaboration is very important. I didn't choose to be from Sweden, but it's been a blessing because it has turned out that collaboration is the leadership skill that is crucial nowadays, because there's so many stakeholders in everything and you get very little done if you only talk amongst yourselves. This role is something I believe is not an "end of the road;" it's a start.

Ad Age: You work in Los Angeles, which has in the past been seen as the creative stepchild to big ad cities like New York. Do you think having worked here gives you a different perspective?

Mr. Sjoenell: One of the reasons I came here was based on the insight that people pay for entertainment, not advertising, and we need to learn from entertainment. That's what's fantastic about [the creative talent] in L.A. They know how to build an audience. There's also what's happened also in television, the return to writing and creators, and the creative class in L.A. is on top again. At the same time you have technology moving down to Silicon Beach and the tech scene blooming. It's quickly become a hub when before it was just an outpost, especially in advertising. There's an amazing talent pool that you can't really find in other places, when it comes to expertise you can't find at an agency. The interesting thing also is that business here is very fluid, very much about connectivity and trying things. There are no structures you need to break. They're already broken. Also entertainment is looking over the fence to advertising -- which used to be something seen as as dirty -- as something that could help them. And we do the same. There's very much a coming together out of necessity.

Ad Age: What's been your most exciting project out of Los Angeles?

Mr. Sjoenell: The collaboration with Scooter has been fantastic. Our joint venture has allowed us to play on some of the biggest social fanbases in the world, with Justin Bieber, Ariana Grande. There's a lot for brands to learn from actual fans and how they behave, and the power shift to users. It's been really important for us to learn. We're working a lot with Google and in the work we've done the California Sunday series represents what I've really wanted to do since coming to L.A. It's content that's not over-branded, it's when you have all the different players coming together to do their part.

Ad Age: What are the strengths of your various offices?

Mr. Sjoenell: There are some amazing, interesting different markets. Stockholm is at the absolute cutting edge of mobile and is our spearhead in technology. The startup scene is on par with Silicon Valley now. Understanding the China market the way our agency in Shanghai has done for over ten years is fantastic, and it's vastly different. And there's Mumbai and the exciting India market. Singapore has done fantastic creative work with Ikea Bookbook and Nike and New York with Playstation and Netflix. London, the mothership, the "mothersheep," every time I go there I see how it really is a proper machine. It's that British professionalism that is hard to find anywhere else. I think that's one of the things that got me excited about BBH. First through Levi's and then to really see how to have high standards for the parts of the process. I love the juxtaposition of having a highly creative product that you're very serious about. I think that's something in our industry that is important to hold on to, especially now with so many having the same tools as we do. We have to keep our standards.

Ad Age: Did John Hegarty give you any interesting words of advice?

Mr. Sjoenell: There are so many. It's hard to say. He's such an inspiration. To put my job in one sentence, it's to make John proud. But that would be also to take BBH to new places, with him and Nigel. To live up to their standards. No one can ever replace him but I can take the job of trying to keep him happy.