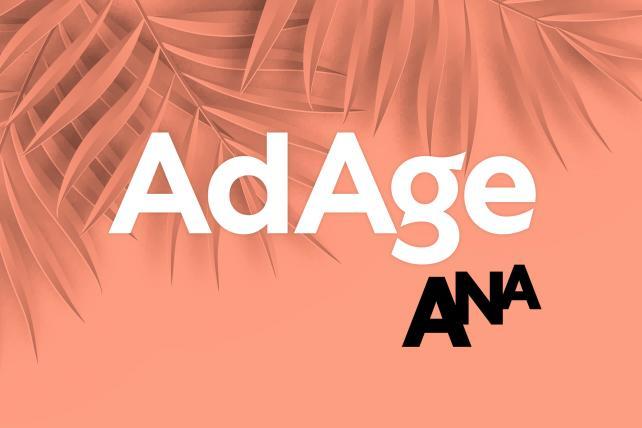 Marketing executives who control the budgets of the nation's largest advertisers are in Orlando this week for the Association of National Advertisers annual "Masters of Marketing" conference. Ad Age will be on the ground to cut through the clutter and deliver you what you need to know about the four-day event, which kicked of last night with a dinner and performance by Train. In addition to Drops of Jupiter, the forecast here calls for rain and thunderstorms, which is perhaps appropriate for an industry facing its own storm clouds, including the growing threat of privacy legislation that could make digital advertising harder. For more on what to expect, check out our primer.

Follow along on this blog for what catches our eye at the event, which is now in full swing with presentations by Progressive, FedEx, Unilever, Bank of America and others.

You know something is popular when even Michael Kassan can't get a good seat. The MediaLink CEO, and notorious mover and shaker, was stuck in the back of the room at ANA's "second stage" Thursday afternoon. In an experiment this year, the ANA added the venue to run programming concurrent with the main-stage fair. While the name of the stage suggests second-class status, that was hardly the case. A security guard had to actually turn people away for the morning session, which drew a standing room-only crowd for presentations by Terry Kawaja, CEO of digital marketing investment bank advisory firm Luma Partners; Rob Master, VP of media and consumer engagement for Unilever; and Nydia Sahagun, senior VP of segment marketing at Wells Fargo. 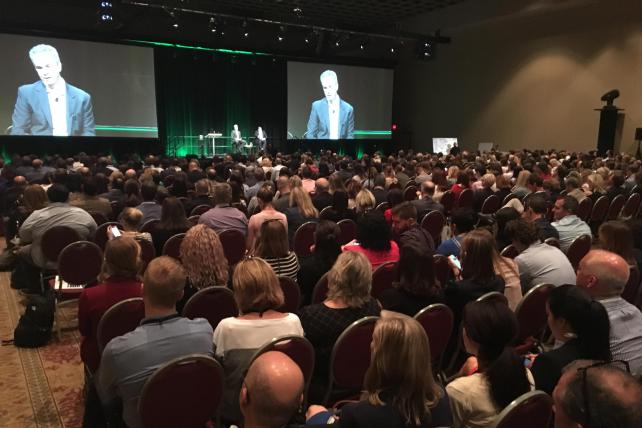 For the afternoon session, ANA rejiggered the seating and took round tables away to accomodate more people for a talk by Geoff Ramsey, chief content officer at eMarketer; and Lou Paskalis, senior VP of customer engagement and media investment at Bank of America. The main stage room still drew plenty of people, of course, but it looked half empty just because it is in a much larger room. 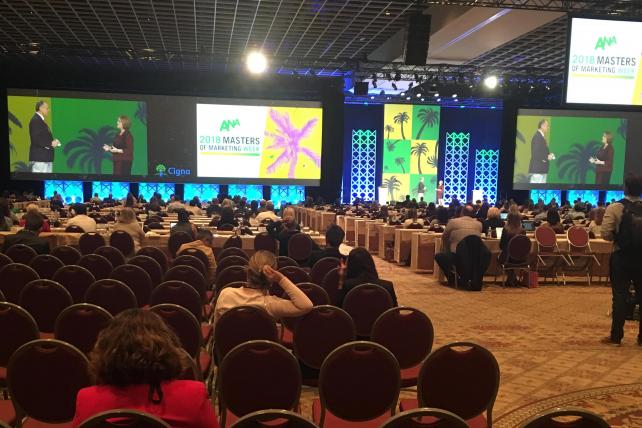 The ANA main stage on Thursday.

What's the lesson? It could be that attendees crave more wide-ranging discussions about timely topics. At the main stage CMOs from Ancestry, eBay and Cigna largely talked about their own campaigns. No one with a CMO title spoke on the second stage, where the line-up included Ramsey simply riffing on eMarketer reports about topics including voice search and advertising trends for over-the-top and connected TVs. Kawaja's talk was actually called "Fire your CMO: Marketing's Future Will Not Resemble its Past," which he used to describe why traditional brands are falling behind direct-to-consumer startups like Airbnb and mattress-seller Casper. Paskalis did not give a formal presentation; he just fielded questions from ANA executive Bill Duggan, including about how the bank hired a "brand safety officer" to help keep the bank's ads away from questionable online content. Paskalis also revealed that he was once a bartender, prompting this audience question from Kassan: "Can I get a Grey Goose, up with a twist, please?" —E.J. Schultz

Credit Terry Kawaja, CEO of digital marketing investment bank advisory firm Luma Partners, with the best self-plug this week. At the end of his presentation on the rise of direct-to-consumer brands like Dollar Shave Club and Airbnb, he put on an FBI jacket, which at first blush could have been interpreted as a reference to the ongoing criminal investigation into media buying practices, which has agencies under the gun. Turns out Kawaja was playing off the FBI acronym to tout his company, known for its Lumascape graphics that bring order to the sprawling scope of several industries. He revealed a slide that stated "Luma: Agents Facilitating Business Investment." The reference was not lost on Bill Duggan, group executive VP at the ANA, which has facilitated communication between the real FBI and ANA members about the probe. "If you walk around with this jacket, there is something else going on with the FBI you guys may have heard about in the trade press, you'll scare the hell out of a lot of people," Duggan quipped to Kawaja during an on-stage Q&A. -- E.J. Schultz

Take a sip every time someone says "brand purpose." Certainly not a new phrase for this crowd, it was hammered home repeatedly at morning sessions from FedEx, Ancestry and eBay. In fact, Suzy Deering, the chief marketing officer for North America at eBay, even joked about the repetition of "trust" and "purpose" being perfect for drinking games. "You just heard from two great companies talking about how incredibly important purpose is," Deering says. Indeed, Ancestry's Executive VP- Global Chief Marketing Officer Vineet Mehra says the brand's purpose, "to enable journeys of personal discovery that collectively inspire a world of greater understanding and belonging," is turning into a movement.

And anyone with purpose fatigue won't get a break anytime soon.

"As marketers, we are just beginning to discover the power of unlocking purpose," says Rajesh Subramaniam, executive VP-chief marketing and communications officer at FedEx. Deering concurs: "Purpose is not going away." Guess we already know a key theme for next year's conference.—Adrianne Pasquarelli

Heaven is a place… in Orlando

At least on Thursday morning it was, when a packed room of ANA attendees stood up for a quick karaoke sesh led by Progressive Insurance Chief Marketing Officer Jeff Charney. Speaking about the importance of taking risks in marketing, Charney encouraged the audience to stand up and sing to Belinda Carlisle's classic hit, "Heaven Is a Place on Earth." Despite the lack of alcohol, and the early morning timeslot, the crowd happily acquiesced. —Adrianne Pasquarelli

When the CMO of @progressive gets the #ANAMasters crowd singing. Plus the Flo costumes! #anamarketers @ Rosen Shingle Creek https://t.co/lnOoM0HMxr

Slow growth: 'An indictment on our industry'

For the third consecutive year, ANA CEO Bob Liodice used his opening remarks to urge marketing execs to "take our industry back." It begs the question: Who's got ahold of the industry now and why is it taking so long for marketers to retrieve it? Liodice did not identify a single bogeyman, instead ticking off a laundry list of issues that CMOs have been struggling with for years, including the opaque digital media supply chain. "Just 25% of CMOs' digital media investment reaches target audiences," he said. "This atrocity represents more than $20 billion of marketing waste annually and the inefficiency and ineffectiveness that comes with it." He also cited ad fraud, saying it was costing the industry $7 billion annually.

As for solutions, the ANA under Liodice has created a seemingly endless stream of initiatives. In his speech, he routinely plugged the "CMO Masters Circle," a group of chief marketers ANA first began convening two years ago to tackle major issues. (More on that below.) The newest program is called the "ANA Center for Brand Purpose," which Liodice says will launch next month. "Purpose" is a well-worn phrase at ANA conferences, referring to brands that use their marketing to plug some sort of social issue. But none of these programs will matter if brand marketing is not boosting the bottom line, and right now that's a problem. Liodice pointed to the Fortune 500, saying half of the companies on the list have experienced declining after-tax profits in the last three years. "Ladies and gentlemen, this is an indictment on our industry," he said. --E.J. Schultz

It's not quite the Illuminati, but there is elite inner circle here at the Masters of Marketing, and not everyone is invited in. The ANA CMO Masters Circle was established two years ago by the ANA, but is only now experiencing a revival in attention. The group held private meetings that were closed to press early in the week, before the majority of the annual conference's 3,000 attendees had yet to arrive in Orlando. Around the same time, a new Twitter handle, @ANACMOMasters, began making the rounds with missives about marketing talent, leadership change, growth and issues.

Marketing can shape society and create sustainability. By acting together as marketers, we can be a force for good and for growth. @marcpritchard1, CBO of @ProcterGamble shares his thoughts at the Global CMO Growth Summit. #ANACMO @ANAmarketers pic.twitter.com/52ZLFObFUc

The private meetings, dubbed the CMO Global Growth Summit, started earlier this summer in Cannes, an ANA spokesman says, noting that it's a day-and-a-half of interviews and sessions with the leading CMOs who are part of the circle. Roughly 200 CMOs attended the sessions at ANA, and the sessions will continue in Cannes next year

ANA CEO Bob Liodice hailed the Masters Circle repeatedly in his opening remarks at the general session, noting that members are working with Facebook and Google on measurement accreditation, and furthering brand growth and relevancy. "The purpose of the Masters Circle is to align the agendas of the chief marketing officer and create a powerful leadership force to transform and grow the industry," Liodice says, promising that Marc Pritchard, ANA's Chairman and P&G's Chief Brand Officer, will take the stage tomorrow to fill us in on the outcome of the closed door meeting. --Adrianne Pasquarelli

ANA organizers are expecting more than 3,000 people to attend the conference here at the sprawling Rosen Shingle Creek resort. Registering for a conference and attending one are two different things, of course, but the printed ANA attendee list reveals the following:

Chief Brand Officer Marc Pritchard, who is chairman of ANA's board and has a speaking slot on Friday (is there a marketing conference at which he does not speak?) is only accompanied by three P&G colleagues.

The federal agency, a longtime ANA sponsor, is listed as having 17 people here, not including CMO Jakki Krage Strako, who is slated to speak at a sponsored breakfast on Friday.

The agency presence is mixed

There are plenty of agency people here, as usual. But some shops brought a lot more than others. McGarryBowen registered 13 people, including founder Gordon Bowen and Chief Creative Officer Ned Crowley. Leo Burnett, by contrast, only has six people here, and DDB has only one person listed, as does 360i. By contrast, Deloitte, which like other consultancies is pushing onto ad agency turf, has 28 people attending representing its various divisions, including Deloitte Digital.

The mouse is in the house

Disney, whose Orlando theme parks are nearby, has several people here, including five from ABC. The list includes Rita Ferro, who just added ESPN ad sales to her plate.

When it comes to the number of attendees, Google beat Facebook, 19 to 10. Twitter also brought 10 people according to the list, as did Pinterest, which was slated to sponsor a breakfast called "Time Well Spent" bright and early Thursday morning at 7 a.m. Those out late partying might think their time is better spent in bed. -- E.J. Schultz 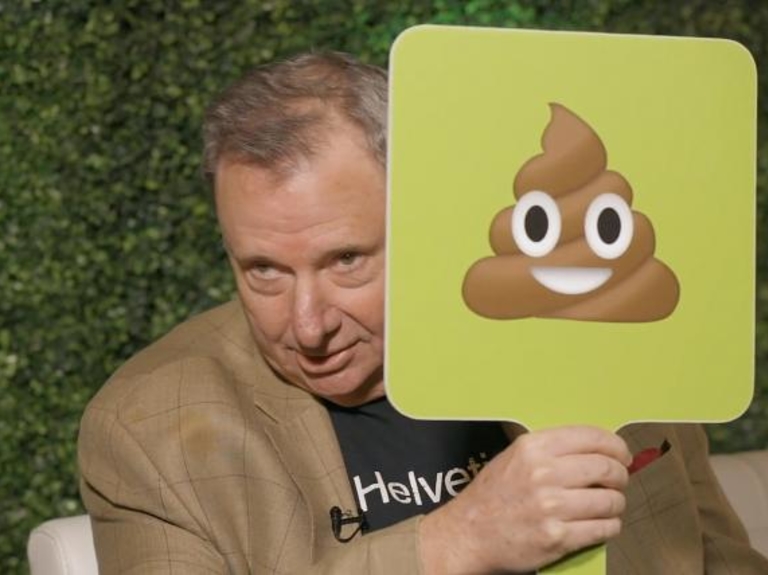 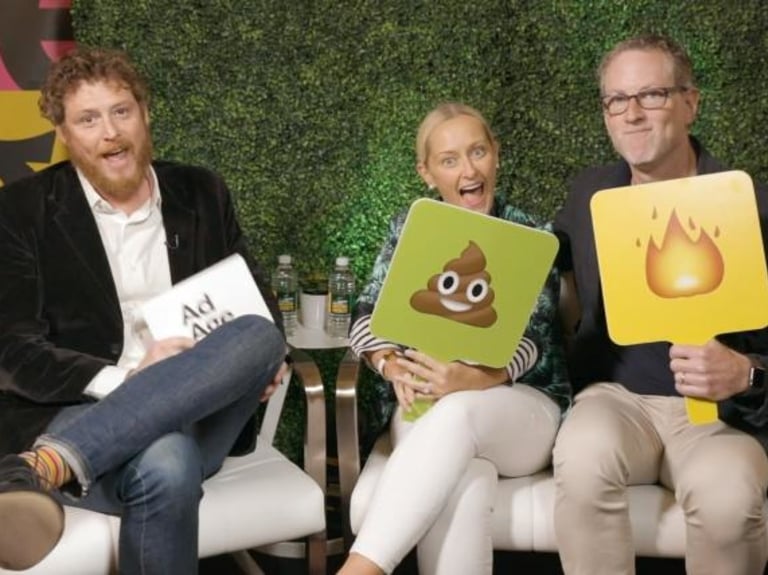 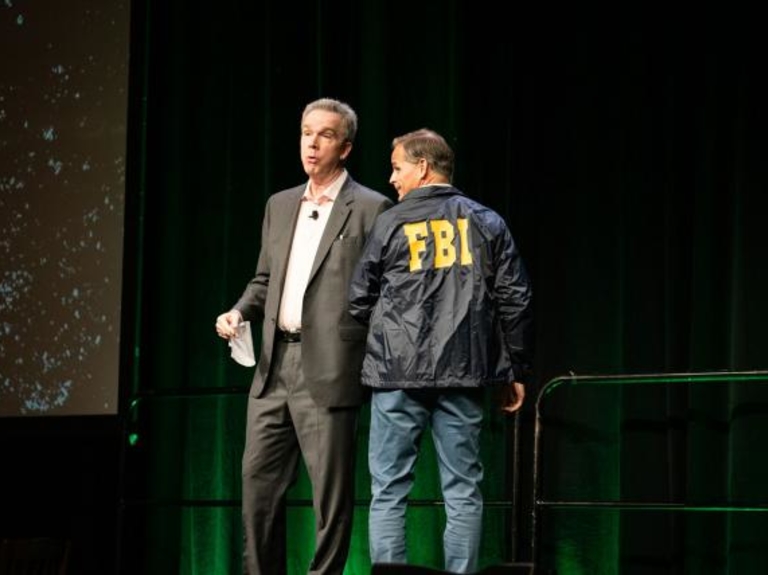 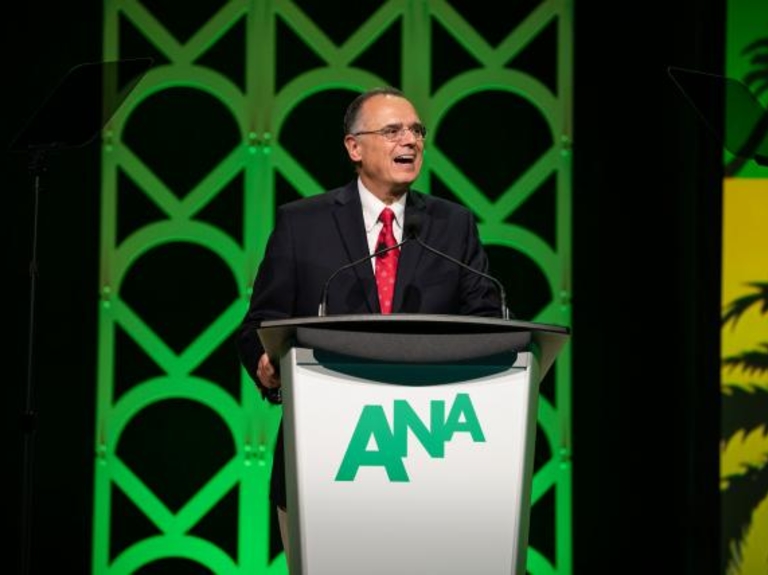 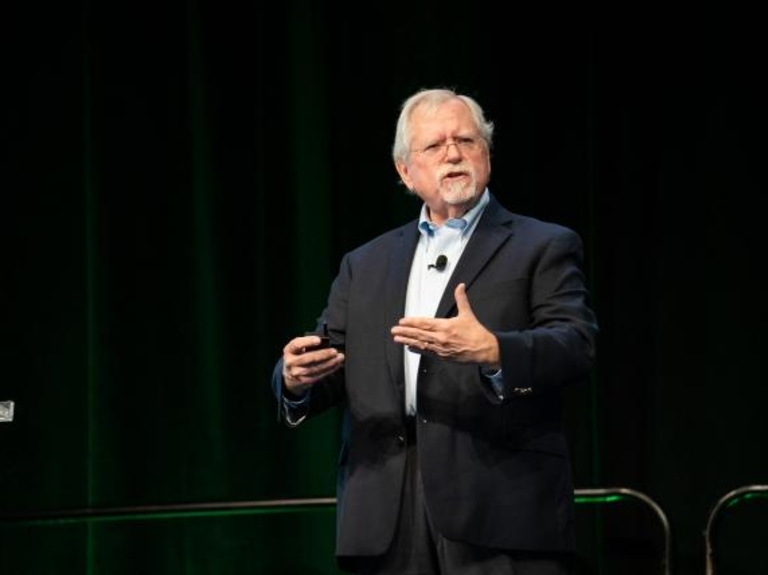 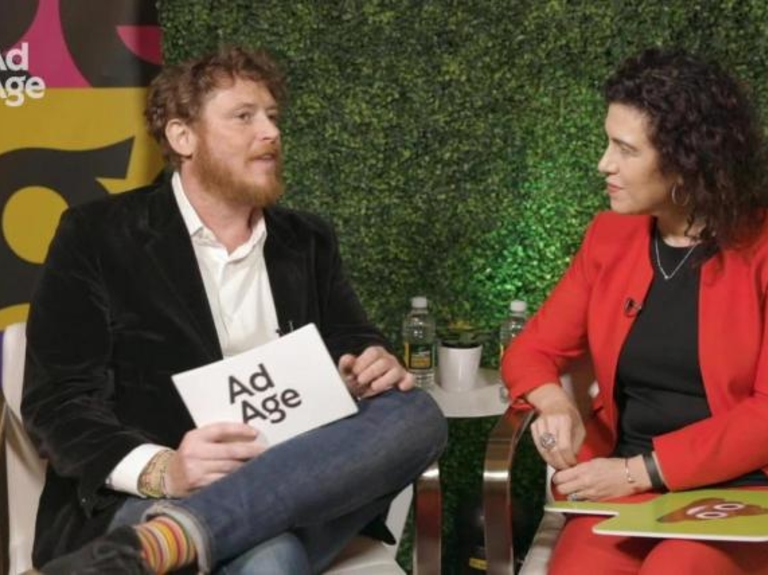 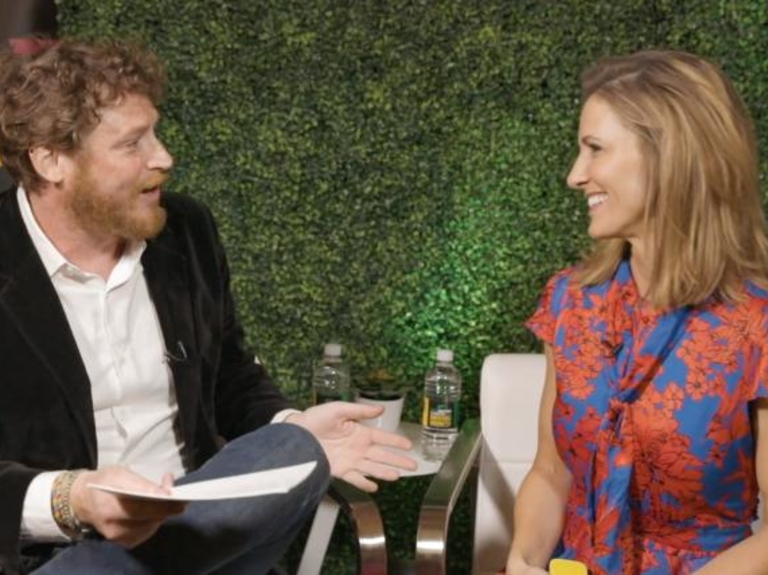 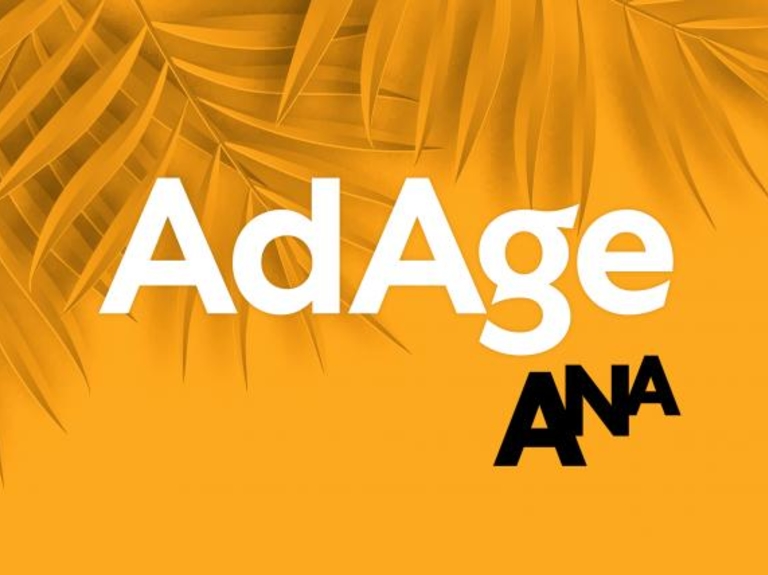