Marketer's Brief: Kohl's ages down, hooks up with PopSugar

Target CEO Brian Cornell caused a stir last summer when he claimed that Hispanic consumers are "shopping much less" and "staying at home," a behavior that he chalked up to a "cocooning factor" and implied, without naming President Trump, owed at least something to new federal immigration policy. That opinion drew some blowback, including suggestions that it might be, well, wrong. Nearly a year later there is new data showing Hispanics are on a spending spree. Find out about that below. But first, we check in on a Kohl's effort to become just a little bit cooler.

Coming to a Kohl's near you: more millennial-focused goods

No longer content to be the land of boring no-name khaki pants and generic dad gifts, Kohl's is increasingly pushing into more modern and millennial-relevant territory. Last year, it rolled out a pilot to accept Amazon returns in brick-and-mortar Kohl's stores. Some locations also sell Amazon merchandise such as Echo smart speakers and Fire tablets. 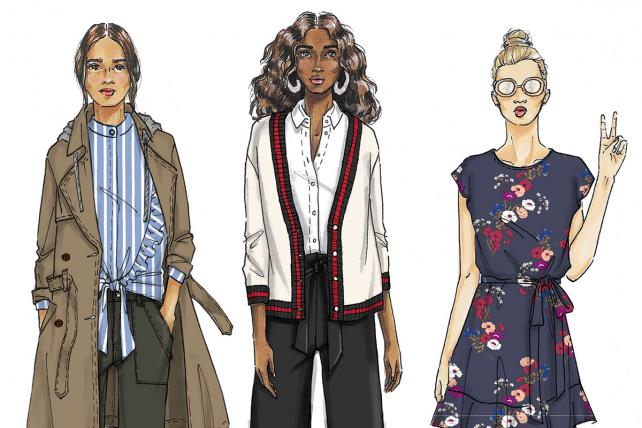 Kohl's is partnering with PopSugar on a clothing collection.
Credit:
Kohl's

Now Kohl's says it will introduce an apparel collection this fall with Popsugar, a youth-focused lifestyle brand that claims it reaches one in three millennial women. Kohl's plans to use Popsugar's data and analytics to create the line. One analyst called it a "smart move."

Meanwhile, Kohl's is streamlining its loyalty system to put Kohl's Charge, Yes2You Rewards and Kohl's Cash under the single Kohl's Rewards program, a move that coupon-crazed consumers will surely applaud.

A new study commissioned by Energy BBDO takes a look at the changing shopping habits of Hispanics. Roughly a year ago, Ad Age found a pullback in spending at traditional retailers, but that pullback was primarily attributed to new offerings by Amazon, not the political environment. Now, 49 percent of Hispanics say they are shopping more often than they were a year ago, Energy BBDO found; 56 percent of undocumented Hispanics are also shopping more often than they were a year ago. However, they're choosing discounters over grocery store chains and convenience stores. Roughly 46 percent of the group are making more visits to mass merchandisers, 41 percent to dollar stores, and 31 percent to discount clubs, according to the survey.

After disappointing investors with 23-percent e-commerce growth in the fourth quarter, Walmart U.S. e-commerce sales grew 33 percent last quarter. That's still below the company's target of 40 percent for the year, not to mention the 46 percent growth that Amazon reported for the quarter. But if you back out last year's Whole Foods acquisition (which Amazon doesn't), Amazon sales revenue grew "only" about 29 percent last quarter.

Procter & Gamble Co. announced Monday that detailed ingredient and other information about 3,500 of its products can now be found online through the SmartLabel program, the largest collection of such data in packaged goods. That may be a good search strategy too, as a new report from Gartner L2 finds online searches for personal-care ingredients have risen 18 percent over the past 24 months on such queries as "cedar deodorant" or "charcoal toothpaste." Unilever's recently acquired Schmidt's Naturals and SheaMoisture brands are among beneficiaries of the trend, according to Gartner L2.

With the U.S. out of the World Cup, brands are trying to find ways to keep fans engaged, like Fox Sports and the genetic-research firm 23andMe are doing with a campaign encouraging people to root for the team that represents their ancestral origins. DraftKings is trying something a little more basic. The fantasy sports marketer is partnering with Jägermeister on a March Madness-style bracket competition that encourages fans to select the winner of all 48 matches in the tournament for a chance to win prizes. Neither brand is an official FIFA World Cup sponsor, meaning they can't use trademarks, which explains why the press release refers to the Cup as "the world's biggest international soccer tournament." The contest, hosted here, is called "The Real Shot." Get it?

Budweiser has a hit on its hands with its new Freedom Reserve Red Lager. The limited-edition brew—which arrived earlier this month, replacing Bud's summer "America" branding—is "flying off the shelves," Anheuser Busch InBev told wholesalers in a memo that claims it is out-selling Sam Adams Boston Lager. The brewer has already sold 30 percent of its inventory and expects it will totally sell out long before its originally estimated end date of Aug. 26. 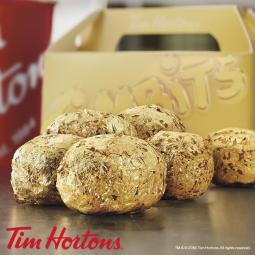 There's gold in them thar donuts! Tim Hortons now has 24k gold-covered Timbits, otherwise known as donut holes. But, there's a catch. The honey-dipped Timbits covered in edible 24k gold are only available on June 1, National Donut Day, in five shops, to the first person in each who asks for "Gold Timbits."

18,000: Roughly the number of candy brand reps, brokers and retailers crowding the Sweets & Snacks Expo in Chicago this week. If only there were a dentist's convention next week.

when you marry a cvs receipt pic.twitter.com/JmJgj4lGz0

Jimmy John's promotes its "freaky fast" sandwiches and delivery, but it's not exactly freaky fast when it comes to executive announcements. After making two big hires in late 2017, it announced them this week: John Shea joined as CMO in October, followed by Stephen Piacentini as chief development officer in November. Jimmy John's says it waited until this week to announce the hirings because it was "in a transition period" and it appears to be cooking up some plans it wants to unveil soon. Jimmy John's touted Shea's 12-year tenure at PepsiCo, including years in sports marketing for Gatorade, but he was most recently a managing director at Teneo Holdings from 2015 through 2017. Piacentini had spent 13 years at Taco Bell.

Jim Sabia, Constellation Brands' top beer marketing exec since 2009, is adding spirits and wine to his purview. The maker of Corona, Svedka and Kim Crawford this week promoted him to executive VP and CMO for all the company's alcoholic beverages. He'll stay in Chicago, where the beer business is based.