From celebrity-led dance-a-thons to digital takeovers to around-the-clock TV ads, NBC and Walgreens are using the full weight of their brands to rally the nation around Red Nose Day. The effort supports charities that help lift children and young people out of poverty through fun and humorous fundraising efforts.

NBC, Walgreens and M&M's are working with the U.K.'s Comic Relief to bring Red Nose Day, which launched in 1988, to America for the first time. The event, set to take place in the U.S. on May 21, will culminate in a three-hour live TV benefit on NBC.

Walgreens is the exclusive retailer for Red Nose Day, which means supporters can only buy the campaign's signature red noses at Walgreens-owned stores, including Duane Reade. The noses are $1 each and all proceeds go to Red Nose Day charities.

In the two weeks since Walgreens began selling the red noses, it reached more than half of its goal to sell "millions" of red noses, according to Linn Jordan, marketing director of cause marketing at Walgreens. "We have a very generous American public, and they have truly stepped up," she said.

The retailer is also working closely with NBC to promote the event through on-air integrations, including pushes on "The Voice," the "Today" show and "Late Night with Seth Meyers." The efforts promote the TV special and encourage viewers to join the cause by buying a red nose at Walgreens.

NBC is working with Funny or Die on the TV event, which will feature dozens of stars including Christina Aguilera, Blake Shelton, Pharrell Williams, Will Ferrell and Sam Smith.

"The full force of NBC Universal is behind this project," said Dan Lovinger, exec VP for entertainment group advertising sales at NBC. "It's starting to remind me of the momentum that was built around the 'SNL' 40th." 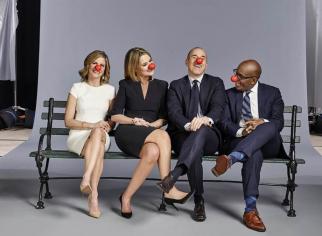 The stars of NBC's 'Today' show

NBC's Matt Lauer is doing a Tour de Red Nose bike challenge from Boston to New York to raise money for the cause and Nick Cannon is hosting a 24-hour dance-a-thon, among other fundraiser efforts from the network's stars.

Other efforts to spread the word, led by Walgreens, include a massive media push with TV ads airing on cable and major broadcast networks from early morning through prime time and late-night, a robust social-media effort encouraging people to buy and share selfies of red noses, partnerships with celebrities including Brooke Burke, Shaquille O'Neal and Eva Mendes, and full-page digital takeovers on Yahoo and People, among other efforts. There's even a pie-throwing challenge.

The creative, out of GSD&M, is designed to spread the word that Red Nose Day is coming to America and that Walgreens is the only place where you can get the nose.

"It's the power of the nose," said Jay Russell, chief creative officer at GSD&M. "You're not going to not hear about the red nose." The agency also sought to keep the mood light and fun to match the tone of the event and Walgreens' tagline: "The corner of happy and healthy."

Comic Relief approached Walgreens, while it was in talks with NBC, to help bring Red Nose Day to America. "It was one meeting. ... It was such a natural fit for us, we made the decision that day," said Ms. Jordan. "It allows us to play into the happy side of happy and healthy, and have fun with the cause."

For NBC, the cause offered a chance to show that the network stood for something, said Paul Telegdy, president of alternative, late-night programming at NBC Entertainment. "It's just good for the business of good," he said. NBC also hopes the cause-related effort will resonate with millennials, who appreciate brands that care about the same issues they do, he said.