Benetton's new print campaign features a disabled model from Germany and a Brazilian transsexual, among other brand ambassadors. Unlike previous campaigns that courted controversy with shocking images, the new ads don't highlight or play up the models' differences. Germany's Mario Galla has a leg prosthesis and well-known Brazilian model Lea T is a transsexual, but that's not obvious in the ads.

Following the 2012 "Unemployee of the Year" campaign, which highlighted the plight of young people looking for work, United Colors of Benetton's latest effort is back to more familiar territory with striking images of its colorful clothing being modeled by a whole new cast of brand ambassadors.

In the past, Benetton has created a name for itself by flaunting shocking images in its ads, including a man dying of AIDS and, more recently, world leaders kissing one another in the "Unhate" campaign, which won a Grand Prix at the Cannes Lions International Festival of Creativity.

In what the company describes as an effort to confront prejudice, Benetton's campaign also includes Kiera Chaplin, granddaughter of Charlie Chaplin, who is an active supporter of UNESCO; Dudley O'Shaughnessy, British former national welterweight boxing champion; Uruguayan chef Matias Perdomo; and Californian Charlotte Free, who is known for her pink hair. 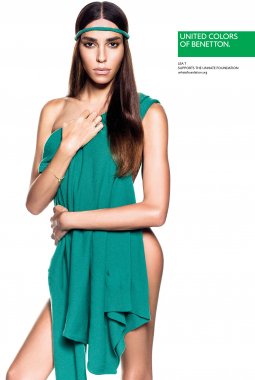 A limited-edition T-shirt with images from the campaign will go on sale around the world, with proceeds going to Benetton's Unhate Foundation.

Benetton Chairman Alessandro Benetton said in a statement, "[This campaign is based] on the iconic value of color -- a founding value for United Colors of Benetton and once again at the center of our aesthetics and communications -- to give a powerful assertion of the identity and excellence of this brand, which holds diversity as a value, and the unity of differences as a wealth to be treasured."

The other models in the campaign are Hanaa Ben Abdesslem, a Tunisian model who is promoted as an example to other Arab women; Alek Wek, who is committed to drawing international attention to the humanitarian disaster in her homeland of Sudan; and Elettra Wiedemann, daughter of actress Isabella Rossellini and granddaughter of Ingrid Bergman, who tries to draw attention to the environment and natural resources.

The campaign was developed by Benetton's in-house advertising agency, Fabrica, working with Italian creative studio Macsiotti. The company plans to continue the campaign with an ever-changing cast of ambassadors.

Benetton is extending the "color" theme into its web presence, with a new website that uses color-coded hashtags for pictures, posts, phrases and tweets from Instagram, Pinterest, and Twitter in an attempt to build an online community around the theme of color.