Patent Trolls Are a Big Headache for Ad Agencies, Too | Ad Age
Skip to main content
Sign In Register

Patent Trolls Are a Big Headache for Ad Agencies, Too

Nefarious Lawsuits Estimated to Cost Ad Agencies $10 Million a Year
READ THIS NEXT
Inside Apple's New Campus: No Childcare (But You Can Freeze Your Eggs)

Agencies and marketers have to team up to tackle a problem that's stifling creativity and killing business.

A few days ago, a friend called to my attention a recent article about comedian Adam Carolla.

Apparently, Mr. Carolla's production company was among those named in a lawsuit filed by an obscure East Texas firm that claims to own the patent for podcasting, even though podcasting predates this company's patent filing by several years.

My friend laughed at the absurdity of someone demanding compensation from companies that have been using a technology that existed long before the patent did.

But it's no laughing matter.

These legal demands and others like it are too often successful. Many victims consider them a form of legally protected extortion. The perpetrators make their money solely through a nefarious practice more known as "patent trolling" -- that is, asserting ownership rights over certain technologies, methods or techniques that organizations use, allegedly, without proper authorization. These lawsuits have been a strain on the cost of doing business in the digital age since 1996.

Did you know that more than 50 claims have been paid for patents that supposedly cover the process of putting a store locator on a website? And that's just one bean in the chili.

Apple and many other brand marketers have been named hundreds of times in lawsuits by companies that appear out of nowhere, suddenly claiming patent ownership on various e-commerce and other commonly used web technologies. Most "defendants" find that it's cheaper to settle out of court for a sum of money than to incur the costs -- in time and money -- of going to trial.

The practice is so ubiquitous that I suppose it was only a matter of time before it affected the advertising community, which, during that past three years, has been hit especially hard. By our estimates, the cost for agencies to defend and settle with patent trolls exceeds $10 million per annum. For marketers, the cost is even greater because marketers are normally the target of troll assertions.

Because of the way some advertising-service contracts are worded, agencies end up indemnifying their clients from patent-trolling claims. Instead of brand marketers paying the settlement for a technology that was used in online-marketing efforts, their ad-agency partners are sometimes asked to shoulder the economic burden.

Understandably, many agencies are reluctant to talk about the issue publicly for fear of revealing contract terms, straining client relationships or attracting more trolls.

For now, there isn't much protection against patent trolls. Unlike copyright and trademark filings, it's nearly impossible to search for patent filings because they are written so broadly, which is also the reason they're "legitimate."

Isn't there some kind of business insurance that can shield agencies from this type of liability?

After conducting exhaustive research, our short answer is no. Still, the American Association of Advertising Agencies and member agencies have been working toward a solution to this rampant problem that can -- and already has -- put some agencies out of business.

Late last year, I was having a friendly and lighthearted phone conversation with a highly respected and awarded creative executive who started his own shop. Our chat took a serious, almost desperate, turn when the patent-trolling subject came up.

"Everywhere you turn, you're afraid to do something that's never been done [in advertising] before," he said. "It's stifling creativity. No clients are going to get our industry's best work because of this."

And that, my friends, is why brand marketers have a stake in this issue.

Agency partners are trusted brand stewards who live and breathe their clients' businesses in an effort to make them market leaders. If agencies fear lawsuits and indemnity for sneak-attack patent claims, they will not innovate on behalf of brands.

Fortunately, my counterpart at the Association of National Advertising, Bob Liodice, understands the widespread and harmful impact of this issue, especially on small businesses. He and I are assembling a task force that will create a set of guidelines and best practices for shared responsibility between our constituencies.

Since 2010, the 4A's has been meeting with the legal counsels of agency holding companies about these issues, and some member-agency executives have traveled with us multiple times to Washington D.C., to explain the anticompetitive effect these patent claims are having on many U.S. businesses.

We've presented testimonials to explain the scope of this problem to the Department of Justice, the Federal Trade Commission and the Government Accountability Office, and we'll soon be visiting key members of Congress. We've called for patent reform time and again.

I'd like to think we've made some inroads, because a few days ago President Barack Obama spoke publicly for the first time about the need for patent reform.

Nancy Hill is president and CEO of the American Association of Advertising Agencies. 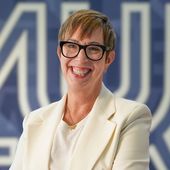