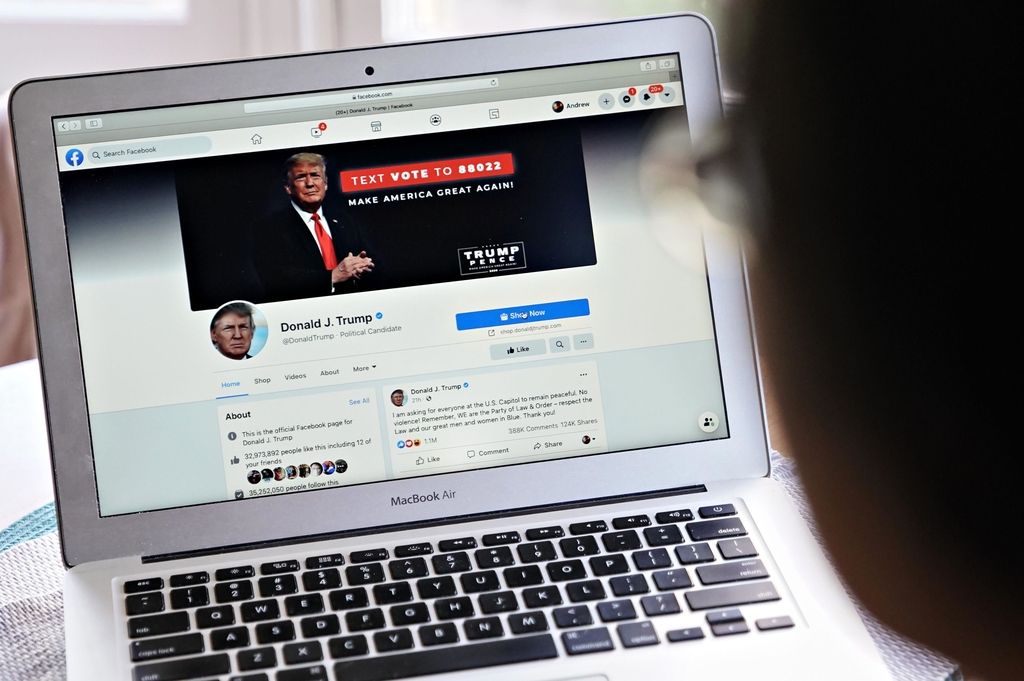 Donald Trump is suspended from Facebook, but the page remains live.

Yes, advertisers can still target ads to fans of Donald Trump on the social network and Instagram, even though the account remains in suspension, which was one of the questions raised by the advisory board that judges content decisions on the platform this week.

On Wednesday, the Facebook Oversight Board issued its eagerly anticipated report about Facebook’s decision to suspend Trump’s account in January, following the attack on the Capitol. The board determined it was appropriate to ban Trump, because the posts in question violated Facebook policies. But the board questioned Facebook about how it applied its policies in the case, which seemed arbitrary.

The board also indicated that it was concerned about how messages spread on the social network, organically and paid, and it asked Facebook to investigate how its tools could have been used to stoke the violence witnessed on Jan. 6 at the Capitol.

The board asked Facebook “whether account suspension or deletion impacts the ability of advertisers to target the accounts of followers.” Facebook declined to answer that question and several other related questions in the inquiry, the board said.

In an email response to Ad Age, the Facebook Oversight Board said that it asked about ad targeting because it wanted to explore how financial considerations could affect Facebook policies, too. “The Board had concerns about political or economic considerations unduly influencing content enforcement decisions,” Dex Hunter-Torricke, head of communications at the board, said. “Not-deleting an influential account because that account brings in a lot of revenue, or is a data-generator for targeting of ads, would be totally inappropriate.”

More Ad Age News
Trump Facebook ban upheld as review board extends exile for now
Vice calls for an end to demo data targeting in advertising, declaring it 'discriminatory'
Mike Juang
How has the TV industry responded to the pandemic? Find out May 24 and 25
Ethan Jakob Craft

There is a definitive answer, though. Advertisers say that targeting fans of Donald Trump is still permitted, even if Facebook demurred on that fact when asked by the board. However, the targeting might not be as clear cut as the board perceived, because advertisers say that they can’t target specific followers of a page, they target people who are categorized as “interested” in a page or personality, based on a range of criteria, advertisers say.

Advertisers also say that it might not be appropriate to ban advertising to people who are fans of the former president.

Facebook’s targeting parameters are “a model of people predicted to follow his page and not necessarily all the people who do,” says Tatenda Musapatike, a former Facebook staffer who leads ad campaigns for progressive digital nonprofit ACRONYM. “If an advertiser sees value in targeting those people then that's fine, in my opinion. I'm sure others would disagree and say that he shouldn't have a presence there. I think it says more about the advertiser than Facebook, to be honest.”

The board noted that Facebook has rules that ban accounts permanently and rules that issue temporary suspensions, but only Trump seemed to get an “indefinite suspension.” That has kept his account in limbo for months, turning it into a zombie page with 33 million followers who can still visit and comment on old posts, but Trump can’t interact with them by posting, commenting or sharing on his own.

Facebook created the oversight board last year, empowering quasi-independent experts and analysts to review its content moderation practices, like when it’s appropriate to ban a public figure like Trump. The board is viewed as somewhat of a “Supreme Court” for Facebook policy decisions, and no decision has been watched as closely as the banning of the former president.

The oversight board’s report on the Trump ban was being watched closely by the advertising community, which pumped close to $85 billion in ad revenue into the social network last year alone. Brands and agencies have been pressing social media companies, Facebook in particular, to clean up hate speech and violent rhetoric. Trump’s account was perhaps the most controversial one during the most volatile moments of the past year, following the police killing of George Floyd in Minneapolis and during the insurrection at the Capitol.

“It matters quite a bit to advertisers if Trump is there,” says one ad agency exec, who spoke on the condition of anonymity because the firm works closely with Facebook. “The tonality and sentiment would be negatively affected, on a couple of platforms, based on Trump’s presence.”

Also, advertisers have heard from civil rights groups and activists for months about the need to take responsibility for the content on the social media sites they support. A return of Trump would intensify the backlash, the agency exec says.

The Wall Street Journal reported on Wednesday that Facebook executives reached out to advertisers ahead of the oversight board’s ruling to gauge what their reaction would be if the ruling went the other way, reinstating Trump. The board ultimately said Trump’s ban was justified, but that Facebook had to clarify its policies and penalties and make its own call within six months. The board said it was Facebook’s responsibility to own whether Trump is banned.

The board was concerned about the Jan. 6 insurrection and the “Stop the Steal” movement, which helped spread lies about the election being stolen. The board asked Facebook to review how the movement grew on the platform. Presumably, some of that growth could have come in the form of paid posts on Facebook, targeting Trump followers with incendiary ads.

“If there’s a concern for individuals being targeted based on their interest in Donald Trump,” says the agency exec, who spoke on condition of anonymity. “Is the concern that the advertiser is trying to stoke divisiveness? If that is the threat, there would still be other ways those bad actors can achieve those ends.”

The board also wanted to know more about how the Facebook algorithm could have helped spread Trump’s messages.

“The Board sought clarification from Facebook about the extent to which the platform’s design decisions, including algorithms, policies, procedures and technical features, amplified Mr. Trump’s posts after the election,” the board wrote. “And whether Facebook had conducted any internal analysis of whether such design decisions may have contributed to the events of January 6.”