Camcorder Maker Tries to 'Verb' Itself -- and Stave Off Smartphone Competition

NEW YORK (AdAge.com) -- Flip, the Cisco-owned maker of pocket-sized camcorders, wants to go mass, and it's hoping its first, multimillion-dollar ad campaign, launched today, will establish it as a lifestyle brand. 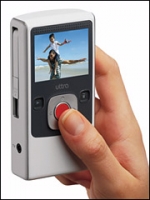 The marketer hopes to make Flip part of the cultural lexicon so that its brand becomes a verb, along the lines of 'Googling' or 'Facebooking.'
For a company that has previously eschewed big media buys in favor of grassroots marketing, it's a new strategy. But there's a lot at stake for the player that invented the sub-category of dummy-proof, affordable camcorders priced around or below the $200 range. For starters, it needs to quickly capitalize on the market's growth before it tapers off, thanks in part to competition from video-camera-enabled smartphones.

According to the Consumer Electronics Association, Flip is competing in a category that should grow 46% from a year ago -- but next year growth will slow to about 11% and it's scheduled to flatten in 2011. And although it dominates the affordable, ease-of-use category with a 75% market share, Flip is also trying to fend off entrants like Kodak and Panasonic while warding off the potential commodization of cheaply priced camcorders.

Convergence is challenge
"Convergence may be the greatest challenge for this category," said Chris Ely, senior analyst at the Consumer Electronics Association. "There's a lot of interest in incorporating various features into a cellphone like camcorder options. It's fair to say convergence could replace the single-function device."

Flip's integrated campaign, including print, digital, out of home and broadcast, shows both regular folks -- and not-so-regular folks such as Stevie Wonder, Usher, and Samuel Jackson -- using their Flip camcorders. Commercials will also feature content that users, including celebs like Tony Hawk, have shot with the camcorder.

From Flip's perspective, the campaign is about awareness-building in a critically important selling season.

"The objective is to drive sales and maintaining our category leadership," said Jodi Lipe, Flip's head of marketing.

Good for Cisco
Going mass could certainly bring big payoffs, not only for the brand but also for its deep-pocketed, router-making parent, Cisco: By getting more people to shoot and upload casual videos and other high-bandwidth media, internet service providers could have to turn to Cisco to upgrade their equipment to process the growing high-bandwidth media.

By creating a lifestyle brand and investing in brand-building, Flip is onto the right strategy, experts say. The new tagline, "Do you Flip?" indicates the marketer's desire to make Flip part of the cultural lexicon, and such a fixture and tool in everyday life that its brand becomes a verb, along the lines of "Googling" or "Facebooking." But not everyone is convinced Flip got its execution right.

"In order to elevate it out of the status of a commoditized product, they're trying to create an object of desire, so that it's an emotional purchase, like what Apple has done with its iPods and iPhones," said Steve Manning, managing director of naming and branding consultancy Igor, who viewed Flip's Tony Hawk-shot spot. "Where it falls on its face is there's nothing compelling about the user-generated videos. They're pedestrian and like any other home video. There's nothing aspirational about them. What happens in the videos should help to build the brand, by using a connected theme or just make me laugh. It's a huge missed opportunity."

"The use of celebrities also diminishes the user-generated feel of the campaign," said Karl Barnhart, managing director of CoreBrand. "Pick a strategy. Either go the celebrity route or stick with every-man users."

But Ms. Lipe defends the choice.

"We're not a big flashy brand and we don't have a big celebrity endorser," she said. "We want to start a movement whether they're a celebrity or everyday people and have them evangelize the product. It's a mass callout to users who have used Flip in capturing moments of everyday life."