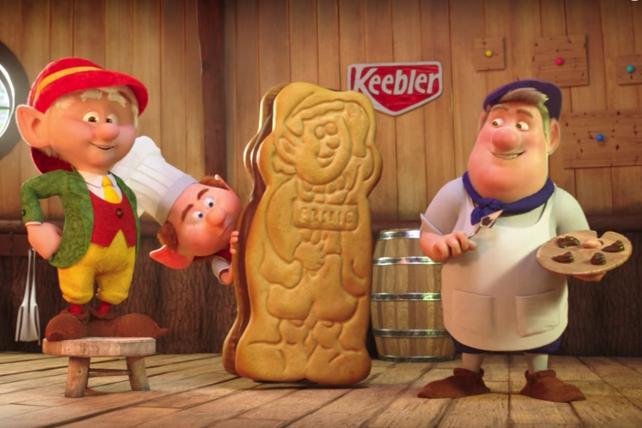 What people are talking about today
Kellogg Co. is selling a few of its brands, including Keebler cookies, to Italy's Ferrero Group for $1.3 billion. Ad Age's Jessica Wohl takes a look at Keebler's longtime mascots, Ernie the elf and the other elves of the Hollow Tree. According to the "Advertising Age Encyclopedia of Advertising" published in 2003:

"The elves were created by agency Leo Burnett, where they were overseen by creative director Robert Noel, who had the unofficial title of 'vice president of elves and gnomes,' In 2013, the brand was even marketed on tiny doors on trees across the country."

It's not clear yet what Ferrero, the maker of Nutella, may have planned for the mascots or for the products. But anything involving Nutella sounds like a good idea.

No more jokes
April Fools' Day is over, and so are the cringeworthy branded pranks. SodaStream did a fake, and gross, commercial for a contraption to convert your burps into carbonation for bubbly water. Starbucks announced a new concept store for dogs called Pupbucks, then spent the whole day tweeting puns about "Pupkin Spice Latte" and "barkistas." (Because if you're going to make a dad joke for April Fools' Day, why not go crazy with corny puns too?)

The whole branded April Fools' Day gag thing has gotten so out-of-control that USA Today did a quiz, "Can you tell the real corporate pranks from the ones we made up?" No, actually. This reporter's score was a pathetic seven out of 12.

CPG takes over natural category
Ad Age's Jack Neff's does a deep dive into the natural personal and home-care products category, and how "a segment started decades ago by bootstrap operators with crunchy-granola roots is now dominated by the traditional packaged-goods giants and retailers, which have mainly bought their way in more or less under the radar."

"The big CPG companies for years watched smaller brands develop with a lot of envy but without taking action, thinking natural was a fad that would disappear eventually," Bernstein Research analyst Ali Dibadj tells Neff. "It stopped being a fad when it got big enough to bother them."

An unexpected brand collaboration
The world's foremost expert on chimpanzees, Jane Goodall, is releasing a deodorant with Unilever, Ad Age's Jack Neff also reports. (And yes, this is an actual product; it's not April Fools' Day anymore, so snap out of it.) And speaking of natural products, the deodorant, called Schmidt's Lily of the Valley, is sold by Schmidt's, a natural brand that was acquired by Unilever, and it's coming soon to Whole Foods.

The Jane Goodall Institute gets 5 percent of proceeds. Unilever's global reach appealed to Goodall, who said it will help with her primary goal of expanding her Roots & Shoots environmental advocacy program for youth from 50 countries now to as many as the 129 that Unilever reaches.

Just briefly:
Cocktail in a can: MillerCoors is launching a new sparkling cocktail aimed at women, and "it's using some of the Instagram-heavy tactics used by direct-to-consumer womenswear brands like ThirdLove, Summersalt and Rothy's," Ad Age's E.J. Schultz reports. The brand is called Cape Line.

Cleaning up: What brands benefit from the Marie Kondo-induced craze for tidying up? Those that sell storage products and secondhand clothing, writes Ad Age's Adrianne Pasquarelli. The Container Store, for one, created digital content and other marketing materials around the trend.

On second thought: "More than a year after announcing Facebook would feature less news, CEO and founder Mark Zuckerberg says he has a new idea: He wants to create a section of his social network that would be devoted to 'high-quality news,' and may pay publishers that share their stuff there," Recode reports.

More on Facebook: "Facebook deleted hundreds of pages and accounts days before the start of India's national elections, saying they were part of a coordinated effort to mislead its users," The Washington Post writes.

Meanwhile...: Publicis Groupe confirmed it's in talks to buy data-marketing giant Epsilon. But the holding company says it "cannot give any indication on whether a transaction would materialize or not." Read more by E.J. Schultz and Bradley Johnson in Ad Age.

Ad of the day: If your cat could serenade you, what would the lyrics be? How about, "I'll be your little kitten if you place me down some chicken"? That's what the cat sings in a new ad from Mars petcare brand Sheba. Except the cat is personified as a French guy in a sequin jacket. And it's the '70s. Maybe you should just watch it. Read more by Ad Age's Alexandra Jardine, and check it out the U.K. See the ad, by AMV BBDO, here.