Opinion: Coronavirus could show brands how to face up to the ultimate test | Ad Age
Skip to main content
Sign In Register

Opinion: Coronavirus could show brands how to face up to the ultimate test

WFA chief says corporate citizenship displayed during crisis could help save the Earth
READ THIS NEXT
How new EU rules could create a safer and more trustworthy online advertising ecosystem
Credit: iStock

Never in my lifetime has our world felt so vulnerable. COVID-19 has infected more than two million and killed almost 200,000 across more than 210 countries and territories. And the numbers keep rising.

The global recession that results from economic lockdown already looks likely to dwarf the 2008-9 financial crisis and the economic hit will likely usher in a period of acute adversity for society, companies, families and individuals alike.

But amongst the doom and gloom, I see a ray of hope. They say that disasters and crises bring out the best in people. From what I have witnessed in the last two months, they have also brought out the best in brands. And that may ultimately benefit the Earth.

I am convinced that the compassion on display from so many brands will be the key ingredient to their enduring success when we emerge from this crisis and address the mother of all challenges: Climate change and environmental sustainability.

Industry commentators have been for some time calling out those in our industry who have engaged in “woke-washing” by using worthy causes to increase sales without backing up the rhetoric with action.

But it feels like COVID-19 has jolted our industry into a "post-purpose’" world. Seeing how brands are currently responding to the immense scale and unprecedented nature of the challenge, I believe we are experiencing brand empathy, humility and utility on a scale rarely, if ever, seen before.

The very human compassion of the people behind the brands seems to have spontaneously permeated their shiny corporate veneers.

Despite the accusation that many COVID ads might sound the same, I believe that brands have broadly struck the right tone. And this will only build consumer trust in the long run. Eight in 10 brands in WFA’s membership have reported developing campaigns in response to the crisis.
Edelman research conducted in 12 countries just last month reminds us of the potential role that brands can play and the trust challenges that government and media face.

Sixty-two percent of respondents said that their country will not make it through this crisis without brands playing a critical role in addressing the challenges. There is a clear desire that brands both partner with government (90 percent) and be a safety net stepping in to fill gaps in the government’s response to the virus (86 percent).

And while a number of governments have been criticized for confused or muddled messaging during this crisis, I have lost count of the number of brands who have helped fill the void with clear and unambiguous messages designed to appeal to both heart (solidarity) and mind (stay home, stay safe).

I guess it’s no big surprise that the communications industry, rather than government, is better equipped to strike a note of compassion, community and connection – “we’re in this together. "

The other day I had the pleasure of listening to Orlando Wood from System 1 talk about "How Advertising Lost Sight of Creativity." Orlando literally went back millennia in taking a fascinating look at the history of art and advertising. Critically, he empirically demonstrates that every human or societal disaster, such as the plagues that swept through Europe in the Middle Ages and beyond, was followed by a period of heightened sense of empathy and depth as illustrated by the art, architecture and even advertising of the period. He compellingly makes the case that we are due a Renaissance in creativity on the back of the coronavirus.

As Orlando encourages anyone developing creative today to embrace the right brain attributes of a humility, humor, spontaneity, altruism, generosity and “being conscious of one’s time and place in the world," I would argue that it’s time to think beyond today’s predicament.

Tough as it might be to swallow right now, COVID19 is not the single biggest human tragedy of my lifetime. Estimates vary, but one figure suggests as many as a quarter of a million people will die every year as a result of climate change.

Today’s public health crisis has shown that people can mobilize and change at a global level. Who would have believed this to be possible? It has also shown that governments can rise to the challenge, but only with the collective support of all stakeholders in society.

Now more than ever, brands have a vital role to play. This is the moment when brands can prove that they put people, not profit, first. And the good news is that many seem to be stepping up to the mark.

At some point the world will emerge from the terrible grip of COVID-19-—hopefully sooner rather than later. But the world will not return to normal. People’s expectations will have changed, and brands would do well capture this zeitgeist.

For the greatest challenge of all awaits our species, and our industry will have a crucial role to play in addressing it. 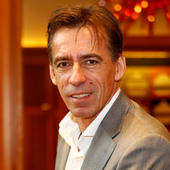 Stephan Loerke is the CEO of the  World Federation of Advertisers