The network could use a few more games, but this October matchup is still crushing everything else on TV
READ THIS NEXT
Fantasy football leagues and advertisers vie to attract fans—and each other 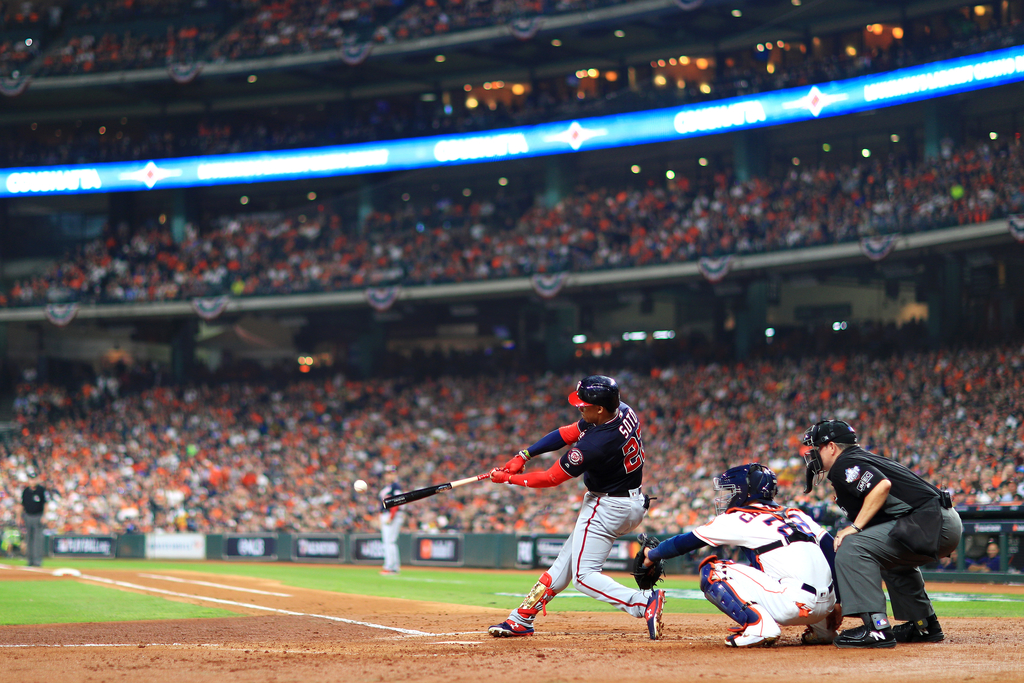 The World Series tonight returns to the nation’s capital for the first time since 1933, and while pretty much everyone in the District is all fired up about their Nationals, the rest of the country is not exactly being buffeted by the winds of enthusiasm.

According to the Nielsen data, Fox’s coverage of the Astros-Nats series is on track to put up the lowest ratings in history—or at least as far back as they’ve been keeping track of this sort of thing. Through the first two games of the Fall Classic, Fox is averaging 12.1 million linear TV viewers and a 7.2 household rating, down 11 percent and 12 percent, respectively, compared to the opening frames of last year’s Red Sox-Dodgers showdown (13.6 million, 8.2 rating).

If things are looking fairly grim for the 107-win Astros—not only are they in a 2-0 hole heading into tonight’s game in Washington, but both of their losses came at home and with aces Gerrit Cole and Justin Verlander on the hill—they’re not much cheerier for Fox’s ad sales team. If the imperatives of history are anything to go by, a sweep is somewhat unlikely (of the 114 World Series on the books, only 21, or 18 percent, were settled in four games); at the same time, the phenomenon is not at all unfamiliar to Fox Sports veterans. Six of the network’s 21 previous World Series required the minimum number of contests, and in one dour four-year stretch, no fewer than three series were clean sweeps.

Sidestepping the brooms can be the difference between a strong TV turnout and a swift kick in the pants. It’s no coincidence that San Francisco’s 4-0 whitewash of the Tigers in 2012 stands as the least-watched, lowest-rated World Series—Detroit’s hasty exit averaged 12.7 million viewers and a modest 7.6 household rating—and in losing out on three games of inventory, Fox left an estimated $115.8 million and oodles of potential gross ratings points on the table.

However the Astros-Nats series shakes out, it’s worth noting that even a radically truncated series will out-rate everything else on primetime TV not affiliated with the NFL. For example, Fox over the first two games averaged 3.88 million adults 18-49, which works out to a 3.0 rating in the dollar demo. Setting aside NFL broadcasts, not a single network program this season has matched Fox’s World Series performance. The two-hour premiere of Fox’s “The Masked Singer” on Sept. 25 currently stands as the highest-rated entertainment broadcast of 2019-20, having scared up 3.25 million adults 18-49, good for a 2.5 rating.

In light of the anemic ratings generated by the Big Four networks’ non-sports programming, Fox’s baseball deliveries remain rather enviable. Season-to-date, Fox is at the top of the Nielsen heap with an average primetime entertainment draw of a 1.1 in the demo, followed by NBC (1.0), CBS (0.8) and ABC (0.8). When juxtaposed with broadcast’s 0.9 average, it’s hard to find fault with the 3.0 Fox is serving up with the World Series. (As it happens, the commercial ratings data isn’t helping the networks make up much ground on the entertainment side. The vanilla live-same-day average inches up to a 1.0 in the C7 currency, about which we’ll have more to report next week.)

Of course, one could argue that this particular October matchup could never live up to the expectations of just a few weeks ago, when it looked for all the world as if the Yankees and Dodgers might square up for the first time since 1981. Not only would such a pairing revive one of baseball’s most storied rivalries (a tradition dating back to 1941, when the Dodgers were the Lords of Flatbush), but it would feature the representatives of the country’s two largest media markets. New York and Los Angeles together boast some 12 million TV households, or 11 percent of the national audience base. By comparison, the top-tier D.C. and Houston markets serve some 4.7 million TV homes, or 4 percent of the overall footprint.

While so much depends on a series going the distance, Fox is still doing quite well for itself with the inventory it’s already locked in. (Which is about what you’d expect, given the dearth of available GRPs.) Pricing for the first two broadcasts was elevated, with many standalone 30-second units selling for around $450,000 a pop. Even a short set will generate a nice fat wad of ad cash; according to Kantar Media estimates, Fox raked in $305 million in revenue over the course of last year’s five-game series.

Per iSpot.tv data, among the most visible advertisers in the 2019 World Series are usual suspects and official MLB sponsors T-Mobile, YouTube TV, Chevrolet, Bank of America, Budweiser, Geico and Taco Bell, the latter of which is running its annual “Steal a Base, Steal a Taco” campaign. Now in its seventh year, the taco giveaway kicked off in the top of the first inning of Game 1, as Nats shortstop Trea Turner swiped second base, thereby granting a free Doritos Locos taco on Oct. 30 to anyone who cares to indulge. Turner’s thievery resulted in the fastest taco turnaround in the history of the promotion, which began in 2007.

This is the third year YouTube TV has served as the presenting sponsor of the World Series. The Google brand has crafted two new spots for the Nats-Astros title fight, one of which features Apollo 11 astronaut Buzz Aldrin stalking the lunar surface to retrieve Pete Reiser’s moonshot homer in Game 4 of the ’41 series.

Game 3 is set to begin at 8 p.m. EDT on Fox, as the Astros’ Zack Greinke faces off against Washington’s Aníbal Sánchez. Vegas books have Houston down as the favorite on the money line (-138), while the Nationals are listed at -280 to win the whole shebang.

Houston, you have a problem

The Astros’ run at a second World Series title in three years has been overshadowed by an incident in the team’s clubhouse in which a senior executive taunted three women reporters during a postgame celebration. As first reported by Sports Illustrated’s Stephanie Apstein, Assistant General Manager Brandon Taubman shouted, “Thank God we got Osuna! I’m so fucking glad we got Osuna!” a half-dozen times, an outburst made problematic by the fact that the pitcher had been suspended by MLB for a stretch of 75 games after violating the league’s domestic-violence policy. One of the women who Taubman targeted with his tirade was “wearing a purple domestic-violence awareness bracelet” at the time, Apstein reported.

After Apstein published her story on Oct. 21, Houston did everything in its power to make matters worse. The club issued an unsigned statement characterizing the report as “misleading and completely irresponsible” before going on to decry “Sports Illustrated’s attempt to fabricate a story where one does not exist.”

In other words, the Astros brass, under cover of anonymity, called Stephanie Apstein a liar. The team’s attempts to smear the reporter began to fall apart in short order, as a number of outlets came forward to corroborate Apstein’s version of events. For its part, Sports Illustrated released a statement saying it “unequivocally stands behind Apstein, her reporting and the story,” adding that the implication of journalistic malfeasance was “completely inexcusable.”

After a day of circling the wagons, Houston reversed course altogether, firing Taubman and asserting that “his behavior was inappropriate and not representative of who the Astros are and our culture and what we stand for.” In the same statement issued to herald Taubman’s termination, the franchise apologized to Apstein, Sports Illustrated and “all individuals who witnessed this incident or were offended by the inappropriate conduct.”

Luhnow said that the Astros decided to fire Taubman without having been directed to do so by MLB higher-ups. The league may look to exact further penalties, pursuant to its own investigation into the matter.

In the end, the Astros’ mea culpa may be reduced to three words in Thursday’s statement: “We were wrong.” For some, it was a step in the right direction; for others, the apology rang hollow.

During the press conference in which Astros GM Jeff Luhnow discussed Taubman’s firing, the exec claimed that he’d been unable to apologize directly to the three women who’d found themselves at the center of the fracas. Apstein was in the room at the time.

Sports Business Daily has a two-for on some significant college sponsorship shakeups, as Michael Smith reports that Intel will not renew its NCAA corporate partnership deal, while official import car Nissan plans to swap out its Infiniti marque in order to “focus on another model within the family.” Intel’s defection leaves the NCAA with 16 corporate partners, a roster that includes champion-level backers AT&T, Capital One and Coca-Cola and 13 other brands with a less rigorous investment. The company originally struck a deal with the NCAA in 2017, a move designed to drive eyeballs to its virtual reality gizmo, Intel True VR.

Dallas Mavericks owner and “Shark Tank” mainstay Mark Cuban this week told FS1’s Kristine Leahy that owning an esports team is a handy way to flush a ton of money down the toilet. In an interview that aired Wednesday on Leahy’s afternoon show “Fair Game,” the billionaire entrepreneur said he believes that “a lot of people who bought into teams had no idea how bad a business it was.” Cuban went on to clarify his assessment, saying, “In aggregate, it’s a good business. Is it growing? Yes. But domestically, here in the United States, it’s an awful business. Owning a team is an awful business.” As Cuban noted, one of the inherent problems with esports metrics is that the gargantuan viewership numbers generated in Asia and other parts of the world don’t exactly translate to similar yield in the U.S.

The New York Jets aren’t likely to be mic’ed up any time soon after a comment by rattled quarterback Sam Darnold made it to the “Monday Night Football” airwaves. Spooked by the Patriots’ relentless defense, the young signal caller said he was “seeing ghosts” out on the football field. If the 33-0 loss weren’t embarrassing enough, Darnold’s Scooby-Doo act was caught by some 10.8 million viewers. While the NFL and its broadcast partners take pains to ensure that anything truly mortifying or otherwise unflattering is kept off the air, an NFL Films rep had OK’d the use of the soundbite in Monday night’s telecast.

While the spectral interlude would appear to be in violation of Article 51 of the collective bargaining agreement, which states that players have the right to “embargo” any sound that they deem as “extremely sensitive or inappropriate,” that provision wasn’t designed with live TV in mind. (It’s more to do with documentary post-production.) At any rate, the Jets were less than pleased with the result, especially since Darnold was in a particularly vulnerable state, having recently returned from a lengthy layoff brought on by a bout of mononucleosis. For his part, Darnold now says that the whole g-g-ghost business was a “bummer” and that it “would have been nice if it hadn’t made the air.”

Perhaps if this football business doesn’t pan out, Darnold may want to think about hosting his own supernatural cable series. Given that there are now more shows about ghost hunters than there are actual dead people, it would appear that our capacity for protoplasmic content is as boundless as Sam’s imagination.