Time flies. That “... y’all good?” tweet was sent 12 months ago today. Now Popeyes is ready to close out the year

Popeyes is pairing a celebration of its stellar year, thanks to its chicken sandwich, with the recognition that 2020 is a year plenty of people would like to see come to an end. The chain’s latest campaign breaks on Aug. 19, the one-year anniversary of the brand’s “... y’all good?” reaction to Chick-fil-A on Twitter.

The Popeyes chicken sandwich launched earlier in August 2019 but that quick tweet cooked up by GSD&M, which at the time was one of the agencies working on the Popeyes account, cemented its status as the “it” sandwich of the year (if such a status exists).

Not even Popeyes predicted its success. The chain soon ran out of the sandwich and brought it back in November. According to Popeyes, it has sold 203 million chicken sandwiches in the past year. One store in Florida holds the single-day record of selling 3,582 sandwiches on Nov. 3, the day it officially returned after the summer sellout. And Popeyes' hot streak has continued even during 2020 as the coronavirus pandemic has led to pain at other chains.

It is only mid-August, yet Popeyes is beginning a play on the ball drop in Times Square. A digital signage takeover running through the end of the month hints at the typical New Year’s Eve celebration, albeit without crowds, confetti or Ryan Seacrest. The push includes a day of free delivery on Aug. 19 if ordering through the chain’s app.

The new campaign includes a video and a full-page ad in today's The New York Times. The push suggests the chicken sandwich can help soften the blows of 2020, from toilet paper shortages to school and sports shutdowns, the potential demise of TikTok, concerns about the postal service, and who knows what may come next. 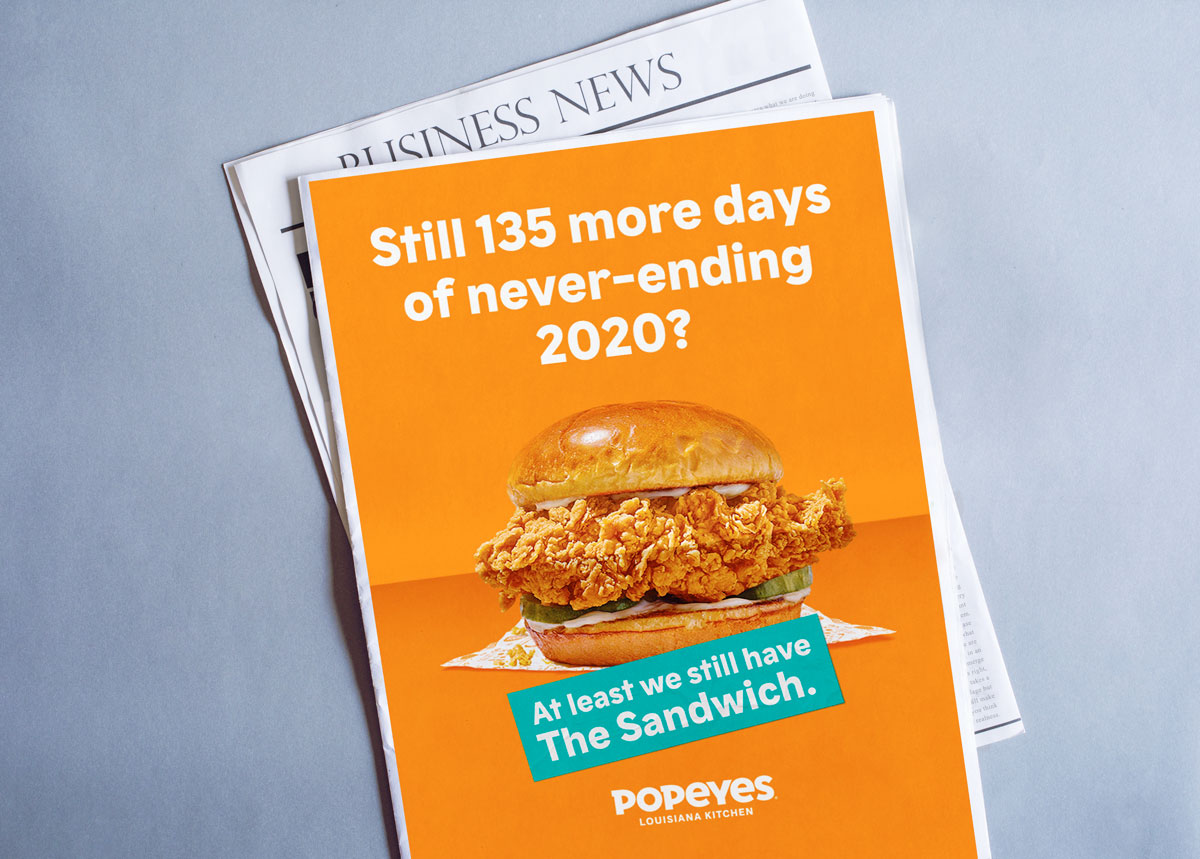 Popeyes is not the only chain to play on the premise that people want to bring 2020 to a close. Its Restaurant Brands International sibling Burger King already tried to fast forward to Christmas in July.

Now, it's Popeyes' turn to count down to 2021. Any fresh buzz about the chicken sandwich is likely to further boost sales. Popeyes has had strong sales gains in each quarter since the product launched. While Popeyes is still smaller than category behemoth Chick-fil-A and Yum Brands’ KFC, Popeyes jumped five spots to No. 19 on Technomic’s Top 500 Chain Restaurant Report, thanks to the sandwich. (Chick-fil-A is the No. 3 U.S. chain overall, while KFC is No. 14).

The campaign comes from Gut, which worked on the original chicken sandwich campaign in August 2019 and became Popeyes creative agency of record in March.

Popeyes: Popeyes teaches you how to make chicken sandwich tacos on TikTok

Popeyes: Popeyes tries to infiltrate family chats to get them to order chicken