How Burger King used cow farts to take over Twitter

Some companies will talk about the need for sustainability until the cows come home. Others, such as Burger King, will simply take action.

This summer Burger King launched its Cows Menu initiative, a commitment to change its cows’ diet to reduce methane emissions (read: cow farts) by 33 percent, and announced it in a fun and memorable way. Not only was it a win for the environment, but also for Burger King’s bottom line—55 percent of people on Twitter say they try to buy only from companies that are socially and environmentally responsible.

cow farts & burps are no laughing matter. they release methane, contributing to climate change. that’s why we’re working to change our cows’ diet by adding lemongrass to reduce their emissions by approximately 33%. learn about our ongoing study: https://t.co/kPCXpjfbGL #CowsMenu pic.twitter.com/DnmF8gVVL0

Burger King drove awareness about the launch of its new sustainability initiative by turning to Twitter to put its brand and Cows Menu at the center of conversation.

To do this, Burger King took four straightforward steps that other marketers can learn from. Here’s what they did:

The day before the campaign, Burger King's buzzy and thumb-stopping tweets made people pause while scrolling through their timelines, generating attention as the campaign kicked off.

breathe the farts of change

2. Put your brand at the center of the conversation.

Burger King utilized a Promoted Trend Spotlight, placing #CowsMenu at the top of Twitter’s Explore tab. Thanks to this prime real estate, Burger King's messaging went on to trend organically. 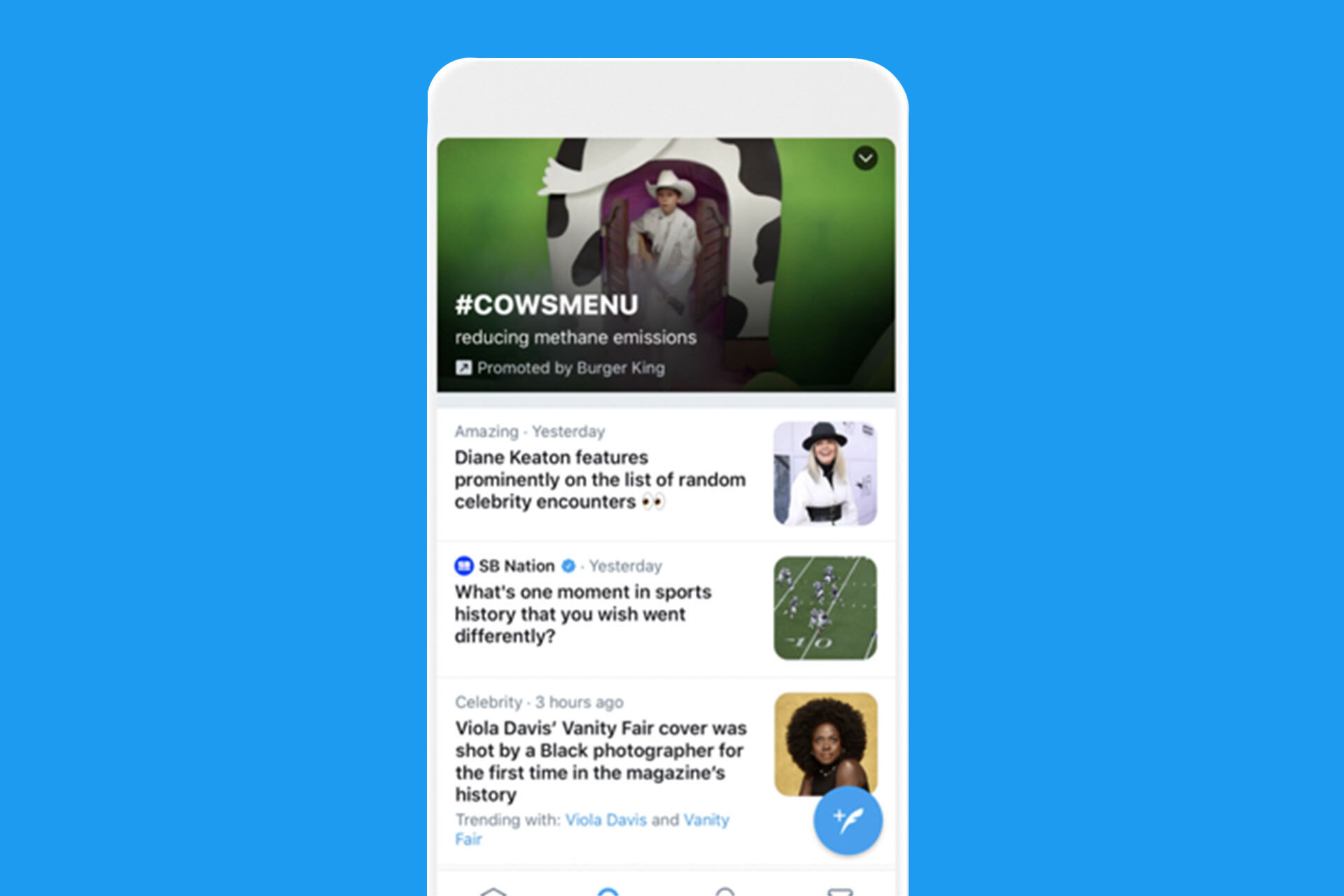 Pairing it with a branded emoji, Burger King used Promoted Video to reveal its message to the masses.

without a doubt the best cow fart news you will hear today. #CowsMenu https://t.co/kPCXpjfbGL pic.twitter.com/HzU41v1Kya

our initial research taught us many things, like which lemongrass to use and how best to process it. we’re sharing our findings with the world in a simple step-by-step video so everyone can *try* the #CowsMenu formula. we can do this. together. here’s how: https://t.co/kPCXpjfbGL pic.twitter.com/mXad5a0HYc

Cows Menu did more than just gas up people’s timelines. It topped the charts, becoming No. 1 in clicks for a Promoted Trend Spotlight across all verticals. The campaign also performed 141 percent higher than industry benchmarks for engagement rate.

The campaign got people on Twitter talking too. Compared with the days before the effort, Burger King saw a fivefold increase in brand mentions during the 24-hour Promoted Trend Spotlight period. It goes to show that whether people are hungry for good news or a good laugh (or both), a good idea executed well will get people talking about your next launch.

The effort also drew a wide range of conversation, which opened new opportunities for Burger King to reach its audience.

“When doing something that stands out, something that is relevant, you will inevitably get criticism on social media,” says Fernando Machado, global CMO of Burger King parent company Restaurant Brands International. “As brands, we need to get comfortable with being uncomfortable, and make a habit of learning from conversations with our critics. That’s how you get better.

“For example, when we received feedback from the farming community around Cows Menu, we engaged with our critics,” Machado says. “With help from Twitter, we were able to identify the growing conversation, and instead of shying away, we embraced the opportunity to provide insights around our point of view, give further context into the project and learn a lot about how to make the initiative even better. In doing so, we made Cows Menu an even stronger and more impactful campaign.”

There are SO many things that I ❤️ about this. Accountability, science-driven solutions, and is that the yodeling kid? This campaign is a great step towards an integrated approach to reducing emissions. Not everyone will be veg, so make the meat more sustainable! #CowsMenu https://t.co/uy3SVYYzRL

The article ‘Burger King Launches #CowsMenu on Twitter, and it’s a gas’ first appeared on Marketing.Twitter.com