As Domino's parts ways with CPB, a look back at their 13 years of innovative ideas | Ad Age
Skip to main content

As Domino's parts ways with CPB, a look back at their 13 years of innovative ideas

After a storied 13-year relationship, Domino’s Pizza will be parting ways with its agency CPB and moving creative duties to Boulder-based WorkInProgress, the agency founded in 2016 by a group of CPB vets who had steered some of the pie makers’ groundbreaking work. Throughout its run, CPB helped Domino’s attack its major shortcomings head on, leading to record sales as well as remarkable, tech-driven ideas that helped to establish the brand’s reputation as an innovation company disguised as a fast-food chain.

Here, a look back at some of the memorable moments of CPB’s run.

Back in 2009, CPB helped Domino’s face up to the fact that its pizza straight-up sucked—at the time customers frequently likened it to cardboard and ketchup. That criticism drove the company to trash its 49-year-old recipe for a brand new one—bringing consumers into the entire process through a host of ads. The landmark campaign saw sales skyrocket—leading to a 14.3% same-store sales gain—at the time a record for the industry, beating McDonald’s 14.2%. It also set the stage for multiple tech-driven ideas that not only improved and modernized its customer service (and later went on to become standard for the restaurant industry) but also gave the brand the reputation as an innovation company that inspired the marketing industry across the board.

One of CPB’s earliest innovations for Domino’s seems pretty standard today, but at the time was groundbreaking in fast food. The agency revamped the brand’s mobile site so that consumers could track the progress of their pies’ production and delivery. For one store in Salt Lake City Utah, the service at one point also included “Domino’s Live,” which allowed customers to view a live webcam feed of their pizza being prepared and baked in the kitchen.

Just as Domino’s was coming into its own as an innovation brand, it decided to help other hard-working entrepreneurs with the “Powered by Pizza” campaign, which gave 50 startups “Pizzavestments” in the form of $500 Domino’s gift cards. The investments were delivered to the companies in a special case with a letter and certificate signed by CEO Patrick Doyle.

Yet another remarkable idea that seems pretty standard today was CPB’s “3D Pizza Builder App” for the brand, which used Open GL to let customers visualize their pie and toppings on their tablets. Their creations could be saved so customers could easily re-order them the next time around. 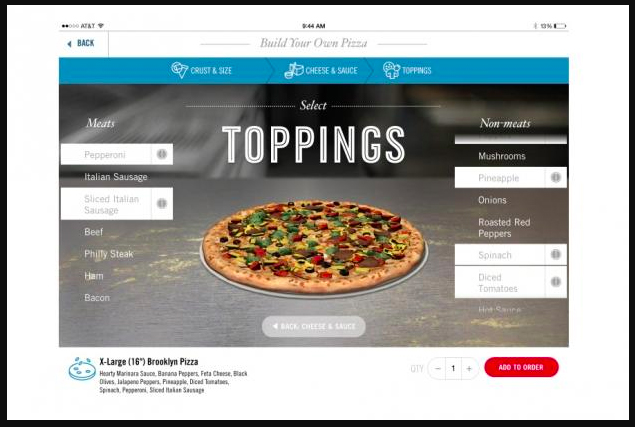 Even before the Apple Watch came out, Domino’s ordering was available on wrist tech for Pebble or Android watches. The app also came equipped with order tracking.

With CPB, Domino’s established the “Anyware” ordering platform, which allows people to order pizza from a broad range of technologies, including Slack, voice assistants like Alexa and Google Home, smart TVs, automobiles and more. One of the first innovations in the system was Twitter ordering, which the brand announced in 2015 through a cute slice-emoji-filled tweet. 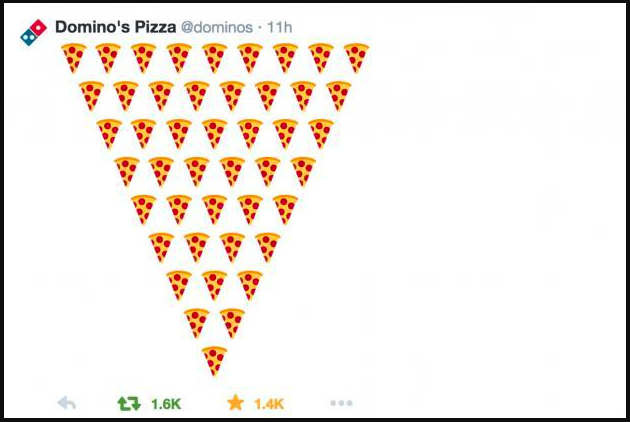 Domino’s went from Twitter to simple Emoji ordering via text messaging in this idea that went on to nab the coveted Titanium Grand Prix at the Cannes Lions in 2015. The jury at the time “felt really good about awarding an idea that has the potential to really impact a big advertiser’s business model,” said its President Mark Fitzloff, founder of Opinionated who at the time was executive creative director at Wieden+Kennedy Portland.

From technology, Domino’s moved into the business of cars. Rather, it introduced its own state-of-the-art delivery vehicle, the DXP, equipped with features designed to keep its pizzas at optimal deliciousness until they arrive at customers doors and to ensure drivers are in peak form. Those included a warming oven, storage for up to 80 pieces and even puddle lighting that projects the Domino’s logo but also helps drivers “keep their sneaks fresh.” The brand promoted the vehicles in over-the-top spots that took their cues from classic sheet-metal ads.

In 2016, CPB conceived the “Zero Click Ordering” app that allowed customers to place an order soon after the app is opened. Once clicked, it started a 10-second countdown clock to when the order would be placed. The clock could be paused and the order canceled, if necessary. According to Alex Guerri, CPB’s then VP-account director and one of the WorkInProgress founders, the app was designed for “power users” and added “a little bit of adrenaline to the [ordering] experience.”

In 2016, Domino’s came up with this clever way to promote its Pie Rewards program by giving them the chance to be part “owners” of the company. The company allowed program members to sign up for a chance to win Domino’s stock, and throughout the following year it rewarded 25 members, picked at random, with 10 shares each.

This out-of-the-box contest from 2018, asked consumers to report their neighborhood’s faulty roads, and Domino’s would help to repair them—all in the name of ensuring that their pies would get to customers intact. Domino’s received more than 137,000 nominations from 15,275 zip codes, and even municipal governments and community groups encouraged citizens to participate.

CPB took a nostalgic turn to promote Domino’s Pie Pass app, which allowed customers picking up pizzas to alert the restaurant when they arrived, so their pies would be ready once they had entered the door. Those picking up their orders would be greeted by name, so the agency brought back one of the most famous “regulars” from pop culture, Norm from the classic comedy series “Cheers,” played by George Wendt. The charming ad played off the warm welcome he’d get whenever he’d walk into the bar, and applied it to customers using the Pie Pass app.

During the pandemic, despite COVID limitations, CPB was able to turn out some noteworthy campaigns for the brand. Those included a recruitment push that may have felt like a welcome message for many of those who lost jobs during the pandemic. The Zoom-style spot featured workers at Domino’s franchisees telling viewers that the chain was hiring—an idea inspired by what franchisees had already been doing on their own. Kate Trumbull, Domino’s VP of advertising and Hispanic at the time, said that “Our goal is to prove to consumers that we’re there for them in these uncertain times.”