Spire Allows Up to 1,000 Flavor Combos Consumers Choose Themselves
READ THIS NEXT
How restaurant chains are duking it out to be the best in their categories

It doesn't look like much; it's an unmarked door among a small stretch of offices 30 miles north of Manhattan. But through that portal PepsiCo has ushered in consumers to test various iterations of its recently launched fountain machines. 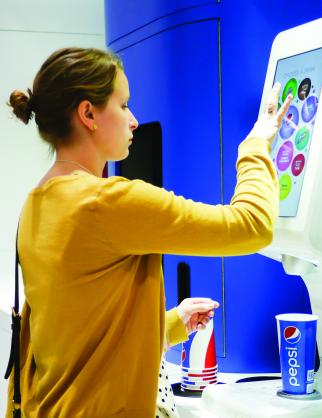 Inside, each of the three versions of Pepsi Spire—the largest of which allows consumers to customize drinks in up to 1,000 ways—are displayed alongside prototypes for new vending machines and coolers. There is the social-vending machine that allows people to gift each other beverages. And next to that, a cooler with a translucent screen that lets the company display its beverages while running a loop of marketing messages.

"In this facility alone we've cycled through hundreds of consumers of different ages, who have interacted with the user experience and the [user interface] of the machines," said Brad Jakeman, PepsiCo's president-global beverages group. "We wanted to make it as intuitive as possible and find the perfect balance between consumer engagement and efficiency."
It's also about finding the right balance between marketing and sales, consumers and customers, choice and inundation.

PepsiCo Chief Design Officer Mauro Porcini said the Pepsi Spire portfolio is one of the best examples of the company's desire to make design a collaborative effort. A diverse cross-functional team, including designers, marketers, sales execs and flavor scientists, worked to generate ideas, prototype, test and tweak the machine.

To the extent it's possible, that team was charged with "future-proofing" the Spire, Mr. Jakeman said, explaining they talked to consumer-electronics manufacturers and trend forecasters. "There's engineering within the machine that may not be activated on day one. We didn't want to over-complicate it on day one," he said. "It was tempting."

"Good design is when you're able to surprise people," added Mr. Porcini. "For some time they are disoriented. There's a learning curve. The trick is how long is the learning curve."

The company has been researching and refining Pepsi Spire for years—its chief rival, Coca-Cola, launched its own futuristic fountain machine in 2009. There are now 20,000 Coca-Cola Freestyle units around the country, and the company is in the midst of rolling out new formats. PepsiCo hopes to have 2,000 units in the market by the end of the year.

For Pepsi, this is an important play. The fountain channel accounts for nearly a quarter of total soft-drink volume, according to Beverage Digest. And Coke dominates with a share of about 70% compared with Pepsi's 19%.

"Obviously there's a competitive machine out there. As we were developing this, we were looking at what was working and what wasn't working," said Mr. Jakeman. "That led us to this notion of more choice to the consumer and more formats for the customer. … We also wanted to celebrate bigger screens, so it feels like an entertainment platform when you serve the beverage. We didn't want to create a machine that had a screen like an ATM."

Back lighting behind the Spire's screen synchronizes with the beverage selected—green for Mtn Dew, for example—and is designed to attract attention, Mr. Porcini said. Oversized screens allow the company's marketers to deliver brand messages both when the screen isn't in use but also throughout the process of selecting and pouring a beverage.

Mr. Jakeman used the example of a movie theater, where the machine's screens could easily be programmed to show trailers for new releases.

The oversized screens also allow anyone in line behind the person pouring a beverage to watch the transaction, which PepsiCo found helps consumers learn how the machine works and cuts down on long lines. The screens can also be set to refresh at set intervals to discourage dawdling.

"There's value in not reinventing the entire system from front to back; it strips down a great deal of complexity," Mr. Jakeman said. "One of the things we spent a lot of time designing is, how do we make sure that, in the event something needs to be repaired, it can be accessed? In some you can just take the screen off and put on a new screen." 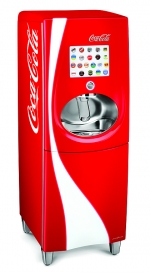 One of the most significant differences between PepsiCo's Spire and Coca-Cola's Freestyle is the way the beverages are customized. Newer Freestyle machines offer up to 140 beverages but consumers choose from pre-selected options. The largest Spire machine offers more than 1,000 combinations by allowing consumers to choose a base brand, Diet Pepsi, for example, and then add up to three flavor shots from a selection that includes cherry, vanilla, strawberry, raspberry, lemon and lime.

That's where PepsiCo's flavor scientists came in. "You can invent your own beverage and the machine won't allow you to create a terrible concoction," Mr. Jakeman said, citing Mtn Dew with vanilla as his personal favorite.

In short, Spire can save you from yourself: The machine doesn't offer the flavor shots that don't work well with a particular beverage. So, while there may be more than 1,000 beverages on tap, there's no lime Mug Root Beer allowed.