The 50 Companies Creatives Would Kill to Work for Full-Time

Creative networking site Working Not Working's fourth annual list of Companies Creatives Would Kill to Work for Full Time is out, and the lineup once again features a mix of agencies, tech firms, retailers and design shops. 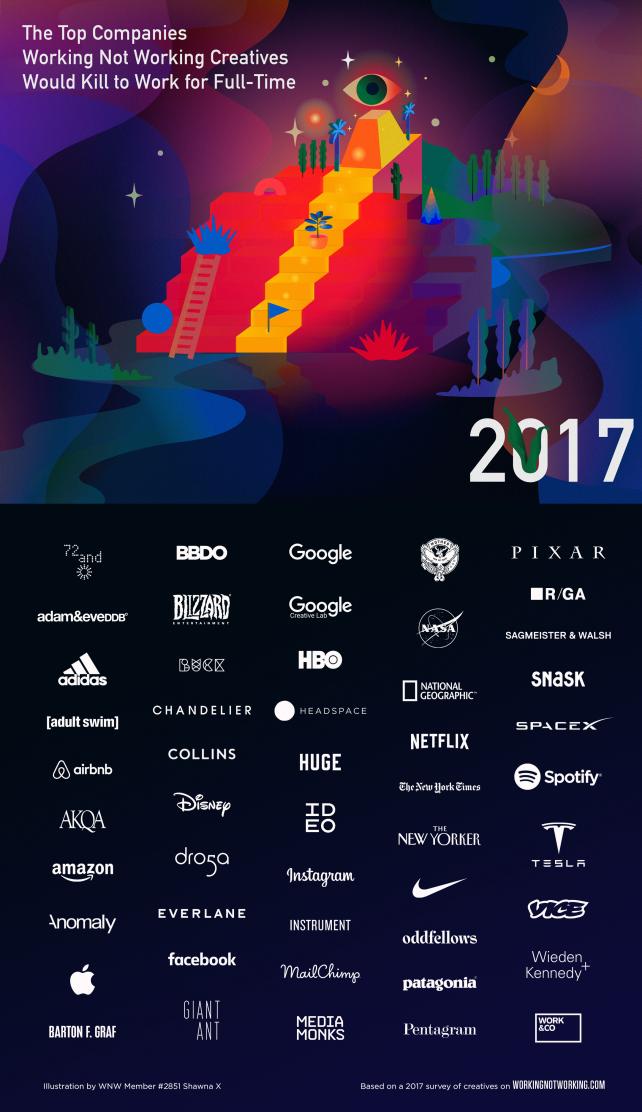 Companies Creatives Would Kill to Work for Full-Time

Five companies didn't make the cut for the first time: Partners & Spade and Wolff Olins failed to hit the top 50, but did receive honorable mentions, while Red Bull, Project Projects and 2x4 dropped off the list.

Working Not Working currently has 30,000 members in its network. It compiles the list by asking members, 64 percent of whom are freelance and 36 percent full-time, which companies they'd want to work for full-time. Nearly 1,000 members participated this year.

"Many other competitions require companies to apply and make a case for their worth, but with this it's just an open form field," says Working Not Working co-founder Justin Gignac. "In order for a company to make the cut, they need to be in the hearts and minds of the best creative talent in the world. So this list becomes a reflection of what's going on culturally and in the industry."

Data from this year's list also found that: 60 percent of respondents were attracted to companies for their creative opportunities; 0 percent cared about company size; 39 percent said that boring and unchallenging work would make them leave a job; only 2 percent said location or commute would make them depart; 27 percent were most interested in working for small studios, besting those who wanted to work for ad agencies (23 percent) and big brands (15 percent).

For the first time, WNW asked its members if they were worried about A.I. and automation's threat to their jobs. Seventy-six percent checked off the box that read, "No and if those robots try they'll have to kill me."

View the full results of the survey on the Working Not Working blog, which has been rebranded from Free Range to Working Magazine.