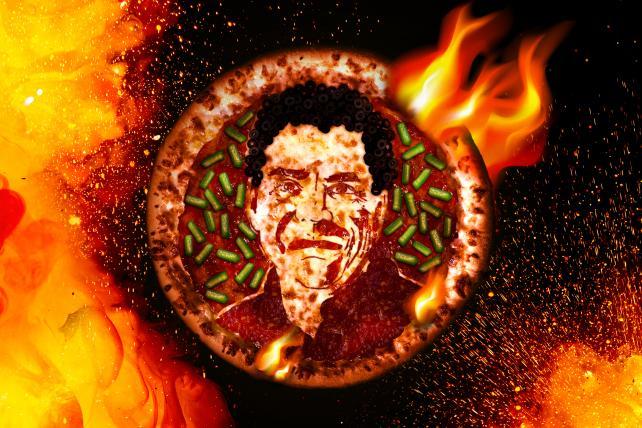 The Papa John's-John Schattner story continues to unravel in new and interesting ways. To keep you abreast of the news, we've compiled a timeline of this saucy saga's most noteworthy events, including Schnatter's latest move (see below). But let's start with the basics: Schnatter, Papa John's founder, stepped down as CEO this past January after comments he made criticizing NFL commissioner Roger Goodell regarding players' national anthem protests. Then, in May, he used the "n" word during a conference call, which led him to resign as chairman of the board. He was then cut out of all the brand's marketing.

Aug. 22, 2018— Who are we to say whether it's delusional, but Schattner seems to think that franchisees and workers are firmly in his court. At least, Bloomberg News reports, he took out a full-page ad in the company's hometown paper, the Courier Journal, to direct employees of the Louisville, Kentucky-based firm to a website he's launched, SavePapaJohns.com. "The Board wants to silence me," Schnatter wrote on the website, which includes copies of legal documents in his fight with the pizza company. "So this is my website, and my way to talk to you."

Aug. 7, 2018— Papa John's second quarter earnings report call goes…about as well as you'd expect. President and CEO Steve Ritchie kicked it off by stating the obvious: "As you know, recent weeks have been challenging." North American same-store sales fell 10.5 percent in July and the company predicts that sales will plunge 7 to 10 percent this year. Meanwhile, Schnatter issued his own statement, saying, "History shows that the Company performs better with me involved, and it declines when I step away." Oh, it also throws Ritchie under the bus. After the report and Schnatter's statement, shares of Papa John's fell 10.5 percent to $36.75 in after-hours trading.

Aug. 1, 2018— Too soon to call it a comeback? Papa John's hires Endeavor Global Marketing as its creative agency of record and strategic marketing partner. Endeavor is the first agency to take on the pizza chain since it lost all its previous agencies of record a few weeks prior. On the same day, Papa John's official Twitter account posts a statement on Twitter saying that it has begun a "listening tour" and promising "more to come."

July 27, 2018— Papa John's says Olivia Kirtley, an independent director, would succeed founder Schnatter as chairman of the board. She was selected by unanimous vote, according to the company.

July 26, 2018— Schnatter sues the company for documents over his ouster, Bloomberg News reports. The suit, according to Bloomberg, reads in part: "Mr. Schnatter sought to inspect documents because of the unexplained and heavy handed way in which the company has treated him" after news surfaced of his use of a racial epithet. A judge will decide whether he is entitled to the information.

July 22, 2018— The Wall Street Journal reports that Papa John's board has voted to enact a "poison pill" option to prevent Schnatter from gaining a controlling interest in the company. The "poison pill" option is typically used to thwart hostile takeovers or activist shareholders, and would be enacted if any Papa John's shareholder attains more than 15 percent of the company's shares without the approval of its directors. The move comes as Papa John's continues to distance itself from Schnatter. Schnatter, meanwhile, maintains he's not going down without a fight. He currently owns a 29 percent stake in the chain, making him the company's largest single shareholder.

July 19, 2018— Ad Age reports that Initiative, Papa John's media agency, is resigning the company's business. The shop had planned on continuing to work with Papa John's, even as the report on the conference call (see July 11, below) broke. Initiative, however, drops the company after Forbes publishes an article earlier in the day illuminating the toxic culture within Papa John's. Initiative says it had previously believed the company's problem was isolated with Schnatter. Papa John's now has no media, PR, or creative agencies of record.

July 18, 2018— Fallon, Papa John's newest ad agency, announces it's no longer working with the company. It had been retained by Papa John's in mid-June following the departure of Laundry Service, but backed out due to the ensuing controversy. Fallon says it had no knowledge of the "n" word incident that led Laundry Service to back out. The Wall Street Journal also reports that Schnatter had been in preliminary talks with Wendy's about a potential merger before the conference call story went public. Those talks have, of course, cooled.

July 17, 2018— In a doozy of a day, Ad Age obtains an internal memo from Laundry Service, Papa John's former agency of record, defending itself from Schnatter's extortion accusation. "The disparaging and outrageous comments about Wasserman and Laundry Service that have been covered are completely false," the memo reads. Also: Schnatter states that stepping down from the company was a mistake, and alleges that the board unfairly terminated him without shareholder approval—he's the company's largest shareholder owning nearly 30 percent of the shares. Later in the day, he hires Patricia Glaser, lawyer for Harvey Weinstein, to represent him in his wrongful termination battle. And for good measure: Schnatter says Laundry Service suggested Papa John's bring on Kanye West as a spokesperson, an idea he rejected because of the rapper's use of the "n" word in his songs. Lastly, Trigg Adams, grandson of Colonel Sanders of KFC fame, calls Schnatter "a weasel" for muddying his grandfather's name, and denied Sanders ever used racially charged language.

July 16, 2018— Papa John's International's board evicts Schnatter from its company headquarters. It also requests he stop making media appearances on behalf of the company. Schnatter says during a radio interview with Kentucky's WLKY that Laundry Service attempted to extort Papa John's for $6 million to keep quiet about the "n" word incident. "They made it pretty clear, the words were, 'If I don't get my f-ing money, I'm going to bury the founder,' said one of the executives," Schnatter said. A number of sports teams cut ties with Papa John's, and the entire MLB ends its "Papa Slam" pizza promotion.

July 14, 2018— A coupon is released by Papa John's, offering 40 percent off full-price pizzas. As some Twitter users point out , this amounts to paying 60 percent—or 3/5—the cost of the pizza. The promotion probably wasn't well-thought out, considering the racist nature of Schnatter's remarks.

July 13, 2018— Papa John's announces that it's cutting Schnatter out of all marketing from the brand. No more Papa John in commercials, on pizza boxes, or in the company's logo. The University of Louisville also says it's dropping Papa John's name from its football stadium, previously called Papa John's Cardinal Stadium, and its business school, the John H. Schnatter Center for Free Enterprise. Schnatter received both after large donations to the school from both himself and the company he founded. Morehouse College, a historically black college in Atlanta, Georgia, orders the removal of a Papa John's on campus after student uproar.

July 12, 2018— Schnatter resigns as chairman of the Papa John's board, though he maintains a seat. He also steps down from the board of trustees at the University of Louisville. Olson Engage, Papa John's public relations agency of record since February, drops its account with the company. Papa John's media agency, though, IPG Mediabrands ' Initiative, announces they are staying on with the company.

July 11, 2018— Forbes reports that Schnatter used the "n" word during a conference call in May. Schnatter later confirms the report, though he clarifies that the word was used as part of a media training exercise. On the other end of the call was Laundry Service, Papa John's marketing agency of record, chosen by former CMO Brandon Rhoten. Laundry Service breaks away from Papa John's as a result of Schatter's use of the slur.

May 11, 2018— Rhoten is pushed out after just one year on the job. CEO Steve Ritchie takes over the position temporarily, until the company can find a new marketer with the skills to work "with urgency and agility," as he puts it. Rhoten soon heads over to Potbelly as CMO.

Feb. 27, 2018— In a not-entirely-unexpected move, Papa John's steps down as official pizza of the NFL. Its eight-year sponsorship of the league ends after a troubling season for the NFL, which saw TV ratings decline and the player protests at the heart of Schnatter's rant. Papa John's shares fall 8.5 percent in late-day trading when the news broke. The next day, it's announced that the No. 2 U.S. pizza chain, Pizza Hut, is taking over the sponsorship.

Dec. 22, 2017— Almost two months after his conference call debacle, Schnatter steps down as CEO of Papa John's, but remains chairman. Then-Chief Operating Officer Ritchie takes over the post on Jan. 1. The company's stock drops 31 percent in 2017 as the result of slow growth and the obvious PR blunders. Then Lil Jon gives Ritchie some competition as Papa John's CEO. The rapper replies to a tweet suggesting he take over the position, responding "I WILL HUMBLY ACCEPT THE POSITION AS YOUR NEW CEO. I CAN START IMMEDIATELY." Papa John's replies in turn "OKAAAY!" in a play off Lil Jon's catchphrase. The exchange is something of a lighthearted turn in Papa John's otherwise dramatic few months.

Nov. 15, 2017— The brand tries to further distance itself from neo-Nazis by giving them the finger. In a series of tweets again apologizing for Schnatter's statement and explaining that it wasn't meant to be offensive, Papa John's clarifies that it believes in the right to protest, and would be opening itself up to new ideas. Except from those posited by neo-Nazis. Rhoten says the tweets were posted because it became obvious that the company's position wasn't clear to the public.

Nov. 8, 2017— Papa John's attempts to recover from the incident by distancing itself from Schnatter's statement. Neo-Nazi website The Daily Stormer quickly jumped on the statement, toying with naming Papa John's the "official pizza of the alt-right" and posting a pizza with a pepperoni swastika. Papa John's in turn condemns racism and hate groups, and says that Schnatter's comment had been taken out of context.

Nov. 1, 2017 —Founder, then-CEO and chairman Schnatter's downhill slide begins with his statement during the company's earnings conference call last fall. In it, he blames the National Football League's handling (or lack thereof) of its players' National Anthem protests for declining pizza sales. Papa John's had been the official pizza sponsor of the NFL since 2010, and the company's shares fell as much as 13 percent after the statement was reported.